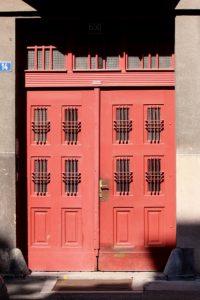 door in the Rondo-Cubist new town of Hradec Kralove

Hradec Kralove is part an old medieval town, but much more is it a fascinating architectural Rondo-Cubism experiment of the early 20th Century.

The first impression of Hradec Kralove is, once again, a Czech town with an old main square, pastel-coloured houses, a fountain, a townhall and a few Baroque and Gothic churches. Except that the square is so big that the cobbled stones have been replaced by tarmac. Terraces with parasols surround the square, a few remarkable buildings catch the eye, but overall, this is Czech main fare. 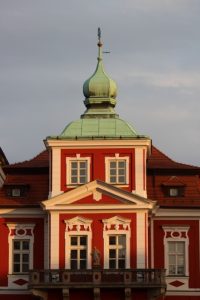 the Dum u Spulaka, at the main square 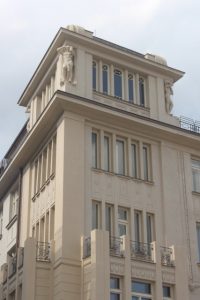 the building of the modern art gallery 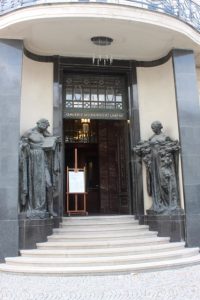 entrance of the gallery 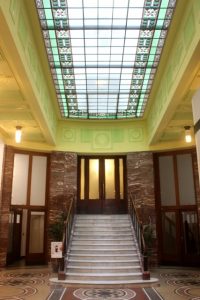 and inside, the lobby with glass ceiling

But at the far end of the square the first traces of Hradec Kralove’s uniqueness present itself. Tucked away in a corner is the Galerie Moderniho Umeni, not only a museum with a comprehensive high quality collection of 20th C Czech art, but also a fabulous building representing what we had come for here, the Czech Rondo-cubism art movement. The building, originally built as headquarters for a bank in 1911-1912, is a strikingly modern dissonant along the medieval square, but in itself it is wonderful, the style, the entrance, the stained glass along the stairs reaching the five floors, all of it. Not surprisingly, the museum collection contains a significant number of Czech Cubist paintings, from some of my favourites like Emil Filla and Josef Capek. 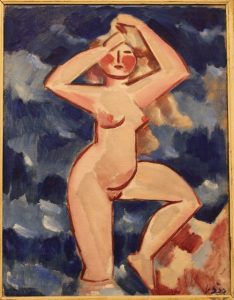 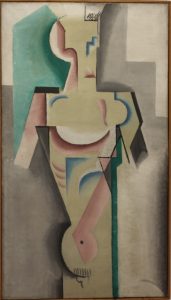 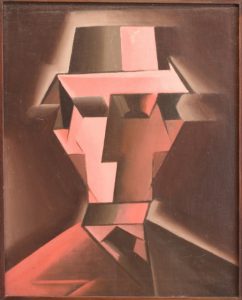 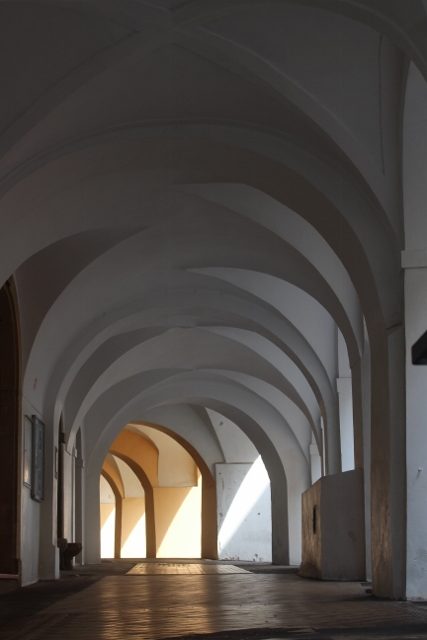 arched gallery leading to the main square in the old town 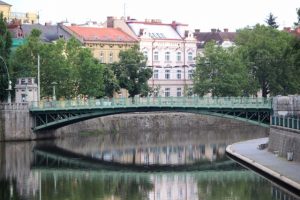 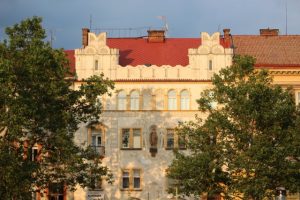 some of the ‘new town’-like houses along the river, in the late afternoon sunshine 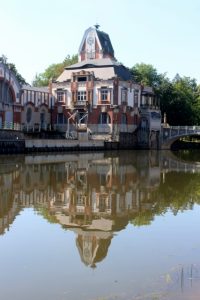 a small hydro-electric power station – not ugly -, mirrored in the Elbe 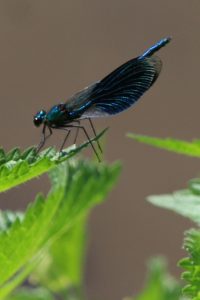 blue libella on a green leaf, along the Elbe 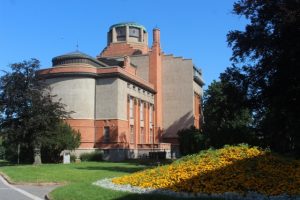 another view of the museum, rather functional, designed by Kotera 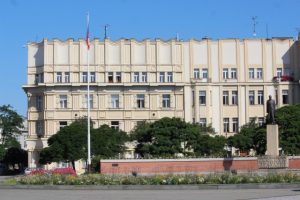 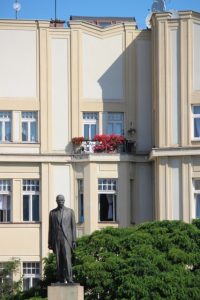 nice touch, with the statue of national hero Tomas Masaryk 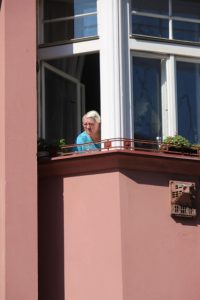 there are people living inside those apartments

The museum is just the start. Earlier during this trip we have been exposed to the specific Czech cubism, in museums in Prague, and we have seen a couple of Cubist houses in Prague and in Pelrhimov, but Hradec Kralove lifts Cubsim, and especially its later exponent, Rondo-Cubism, to a different level. In the early 20th Century the expansion of the town, predominantly on the west bank of the Labe River – the Elbe – that flows through town, was carefully planned with the help of the Cubist architects Jan Kotera and Josef Gocar. Although most of it was not built until the 1920s, the earlier constructions, like the Grand Hotel where we had booked our accommodation, were the work of Kotera. And by the time the bulk of the plan was executed, just after the First World War in the upbeat and self-confident atmosphere of Czechs independence, Josef Gocar, a prominent pre-war Cubist architect, took control. Most of what is on display across the bridge is his Nove Mesto, the new town. And a display it is, of mostly apartment-style buildings, where the square, functional forms have been adjusted with, on the one hand, pyramidal and circular forms to break the monotony; and on the other hand reliefs and sculptures have been added as decorations of the facades. I had expected a few buildings, but in fact, whole streets, the entire neighbourhood, has been constructed based on the Rondo-Cubist principles, and whether you like its style or not – I do, I find it fascinating -, it is an impressive achievement. 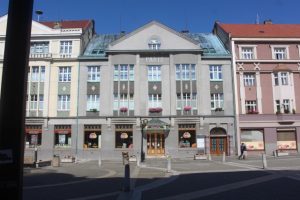 typical Rondo-Cubist designs along another square 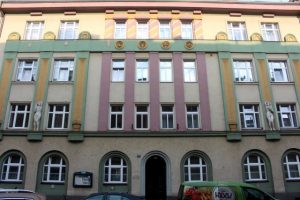 and one of the facades, also in pastels (!) it doesn’t get much more Rondo-Cubist 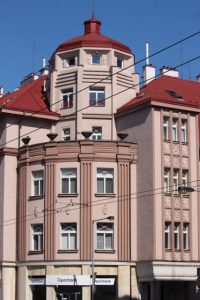 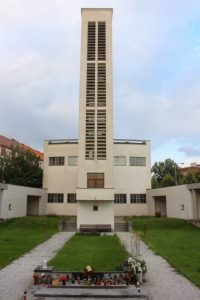 the tower of the small Ambrozuv church 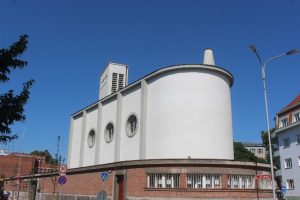 and the church itself, quite functional, as well 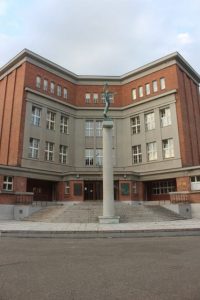 the Gymnasium of the same time

In fact, the few specific highlights mentioned in my guide book were somewhat of a disappointment. The small Ambrozuv church, mostly in functionalist style, still has something special, in its unusual, angular form, but the red-brick Gymnasium, also early 20th C, is quite unremarkable (especially for Dutch, who have plenty of brick architecture examples at home). However, the aptly named Grand Hotel, a building that according to the same 15 year old guide book was crumbling away, has now been patched up. Not only the outside has been restored, inside, too, the old early 20th Century atmosphere has been recreated, with an impressive reception, with alcoves for seating, with the mosaic on the floor. Good that efforts are being made to preserve this unique architectural style. And what a bonus that you can actually stay in a place like this! 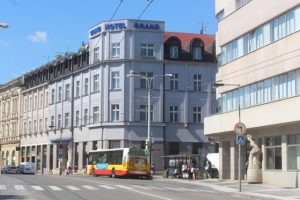 and the Grand Hotel, fully refurbished 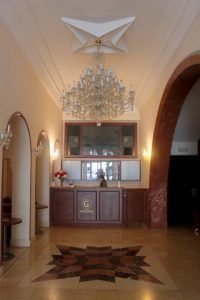 even inside Cubism is never far away