14. the wooden churches of Beskydy 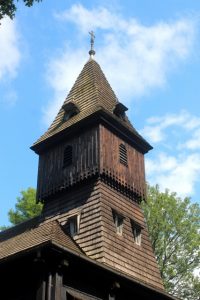 one of the wooden churches in the Beskydy, this one in Bystrice

In the beautiful Beskydy area in NE Moravia several villages still have an old wooden church, unusual these days. We spend the day looking for them, which was mostly successful.

In the NE corner of the Czech Republic, towards the Slovak border, is an area called the Beskydy, hilly, wooded, but unlike other such areas in this country, not yet very touristic. What is more, my guidebook of 15 years had identified seven wooden churches. Having good memories of earlier visits to wooden churches, this is an opportunity not to be missed. So we set out relatively early from Olomouc, with a mission.

The search for the first on our list, the church in Radhost, we have to abandon, because there is some event going on which blocks the road for all cars – and two hours walking one way to reach the church, and two hours back, would have made visiting the others today impossible. Bad start. But beautiful area: all the way to before we get stopped we drive through pristine pine forest, winding our way up the mountains from view to view, except that it is impossible to stop along the road to enjoy it any more than just from a driving car. 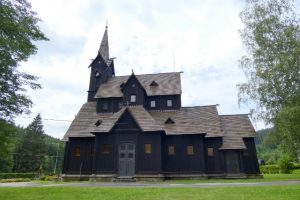 the church in Bila, right next to the road (courtesy Sofia) 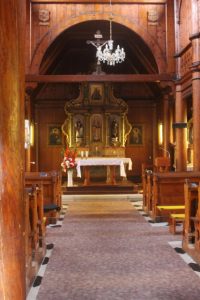 this is the inside of the Bila church, looks pretty new actually

But in Bila, the next village with wooden church, we are successful, the church – according to locals named after Saint Frederic – being positioned right next to the road, close to the village centre. Apparently, the big church was brought from Sweden and built here in 1875. Despite it being Sunday the church is closed, but through the windows we do get a good look inside, which is equally dominated by wood. 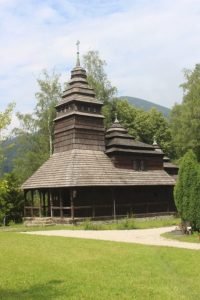 the lovely little St Prokop and Barbara church, originally Orthodox and from the Ukraine 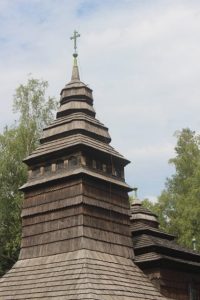 piece by piece rebuilt in 1931 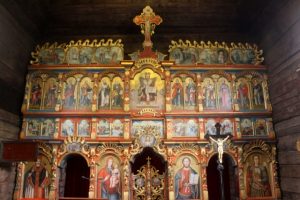 the inside has a distinctly Orthodox look 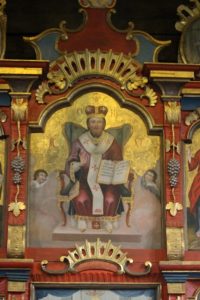 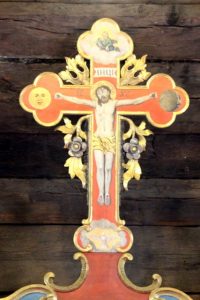 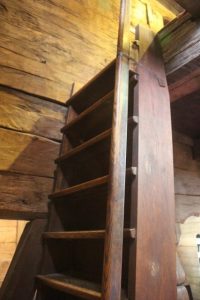 The third one is a bit more difficult to find, but with a translation app and a couple of helpful villagers we manage to locate this wonderful small wooden chapel in Kuncice pod Ondrejnikem. The church, originally Orthodox from probably 16th or 17th C, was purchased from a village in then Carpathian Russia (now Ukraine), and imported lock, stock and barrel, from Ukraine in 1931, by a rich mining industrialist for his wedding. It was then consecrated as a Roman Catholic church to St Prokop and Barbara, the patrons of the miners. A young caretaker lets us inside, where a whole altar front has been painted with wooden panels supporting clearly Orthodox icon-type saints, never mind that the church has in the meantime become catholic. Inside the church is a mini balcony, reached by incredibly steep, and not too firm wooden stairs, where I suppose the three men choir resides during mass – witness the three chairs, and the microphone. 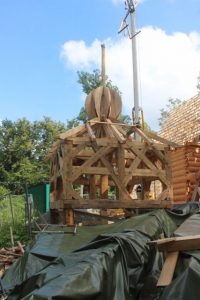 It turns out that the 16th C wooden church in Guty was burned down by vandals after my guidebook had been published. But the community has begun rebuilding the church, sticking to traditional methods, ie without nails. A heavy wooden structure has already been erected, and the onion-shaped dome, also made out of wood, is being prepared next to the church frame, to be hoisted on top once the church is ready. 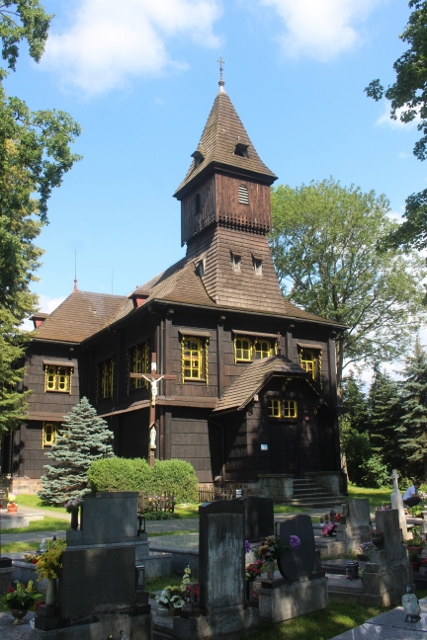 one of the nicest, the church in Bystrice, refurbished last in 1895 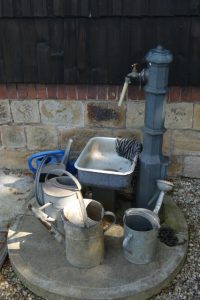 and several watering cans, to aid those coming to the cemetery (courtesy Sofia) 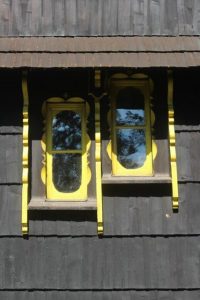 Church number five, Povezeni Krize in the village of Bystrice, is more difficult to find, hidden away between the trees. But in the end the cemetery gives it away. The church, built in 1895 to replace an earlier version, is in excellent condition. What is also clear from all these churches is that they are still actively being used, as the centre of their congregation. All of them are surrounded by cemeteries, which contain a whole range of beautiful stone tombs, often family tombs, with granite slabs or black marble, or other ornamental stone – no use of wood here! The graves, many with a modern look, are actively being maintained, with fresh flowers, candles, and family members attending on the Sunday. For which a wide range of watering cans are available. 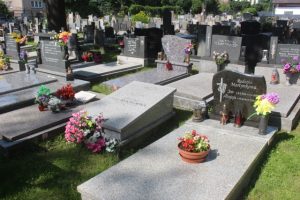 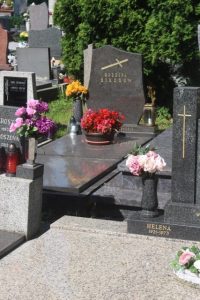 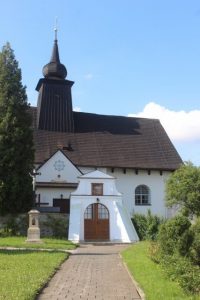 the wooden roof and spire in Rybi, placed on top of a stone church 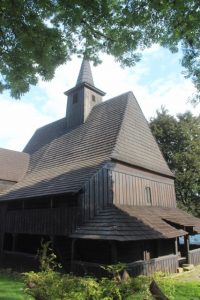 another lovely church, this one in Hodslavice 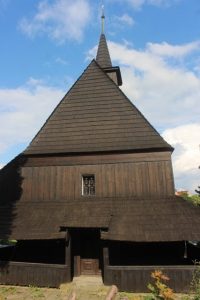 hard to believe that this was built back in 1551 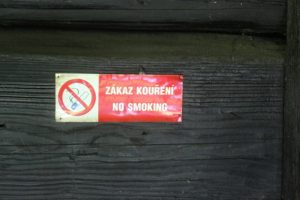 a word of advice, near the church

The church in Rybi is actually a stone church, the only wood being the roof and spire. Cheating, a little, I would say, but it is a lovely construction, nevertheless. But in nearby Hodslavice we find the last, and the nicest of all wooden churches in this region. The chapel of Saint Andrews was originally built in 1551, and is perfectly contoured. Unfortunately, closed again, and only to be opened after contacting the local museum, which we thought on a Sunday would be a rather time-consuming process with little chance of success – which is what other visitors thought, too. In any case, it is getting late, and we still need to get back to Olomouc. 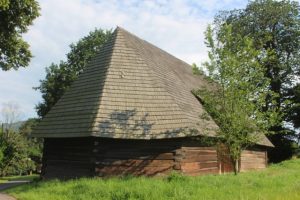 and in fact, not only churches are made of wood, quite a lot of houses, and batns like this one, too

In the end, after a full day’s work, with lots of driving and too little walking, we have a good feeling. Five out of seven ain’t bad. You don’t see these things anymore, you know, or very few – I was about to say ‘ they don’t make these things anymore’, but as today showed, that is not entirely true; here they do rebuilt their wooden churches, if the old one has collapsed.

next: to Hradec Kralova