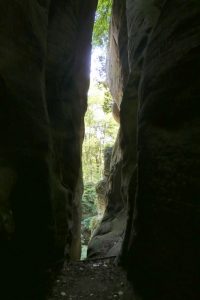 Cesky Raj is one of the nicest Czech nature reserves, great for walks in the forest interspersed with huge sandstone outcrops.

We are on our way to Cesky Raj, the most famous nature reserve in the Czech Republic. Cesky Raj means Bohemian Paradise; we have encountered more instances where ‘Cesky’ – Chech – is translated as Bohemian, which is after all only a part of the country, albeit the dominant part. 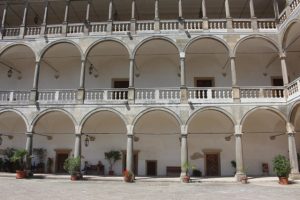 the three-floor loggia of the Opocno palace 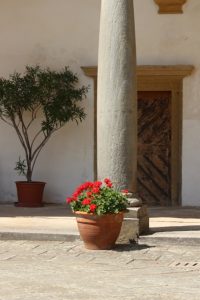 decorated with geraniums, for a change 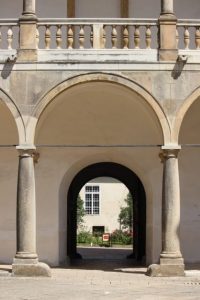 But before we get there, we take a detour via Opocno and Slavonov. In Opocno we admire the local palace, famous for its weapons collection, which doesn’t interest us that much. But the outside has plenty to offer in its own right, not the least the beautiful three-floor loggia surrounding three sides of the courtyard, with views over the plains. 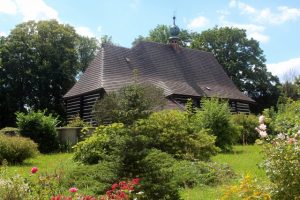 the wooden church in Slavonov 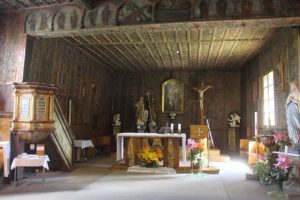 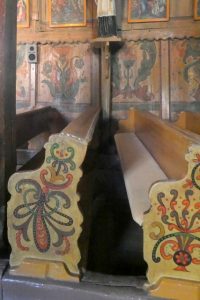 even the church benches have been painted on the side

Slavonov is on the itinerary because it has another wooden church, of which we cannot get enough. The church is closed, but after a bit of effort we manage to locate the friendly sacristan, who is happy to show us the inside. He also proudly tells us, in a mixture of Czech and German, that the church was initially built in the 16th century by the village people, without architectural oversight, and that the church has been maintained ever since, that everything, including the frescos, are original – well, except for the touching up of the paint, of course. It is indeed a strikingly authentic little church, with every part of the inside decorated.

the beam in the middle of the church 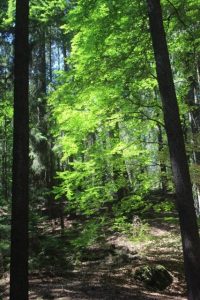 the trees in Cesky Raj 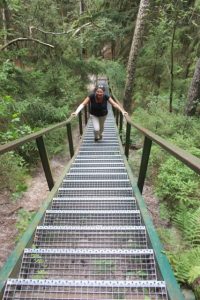 steep metal stairs guide a haphazard tourist to the top 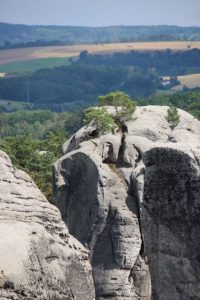 and these are the outcrops that tower above the trees 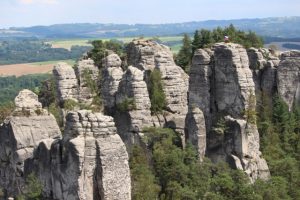 and not just one, this is what they call a ‘rock city’ 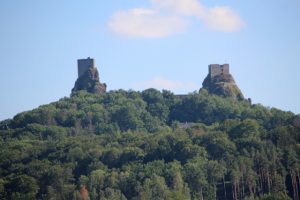 the Trosky towers visible from afar

The Cesky Raj itself is characterised by what is called the ‘skaly’, rocky outcrops of sandstone that tower high above the trees. In some cases fissures in the sandstone allow for passages in between, and for the rest the various hiking trails go around, or across the sandstones, providing a bit of exercise on the steep metal stairs that have been constructed, and fabulous panorama views from the plateaus across the plains, or other sandstone outcrop collections.

At the far end of the reserve the two towers of Castle Trosky have been built, not on top of such sand outcrops but on plugs of volcanic rock, forming a menacing décor from about everywhere in the reserve. 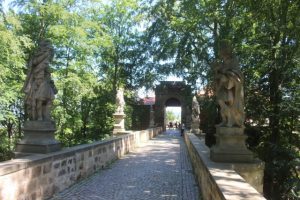 the bridge to the Valdstejn castle 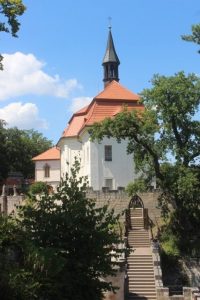 the Nepomuk chapel, part of the Valdstejn castle 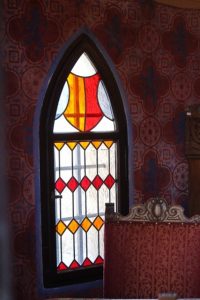 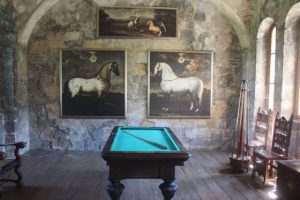 and the billiard table, watched over by horses

At the other end, the Valdstejn castle does have its foundations on sandstone, less pronounced. The castle originally dates from the 13th Century, but the present day structure, including the dominant Saint John of Nepomuk chapel, was built in the 18th Century, or even later. The third castle in the area, Hruba Skala, is where we have based ourselves, neatly in the middle of the nature reserve, and at the cross roads of many of the hiking trails.

Even though it is not a Sunday, the park is full of tourists, mostly locals. Moving in groups, whole families, pushing the prams staunchly up and down the hills, meanwhile drinking beer from large plastic glasses at ten in the morning – nothing strange here in the Czech Republic.

next: the towns of Liberec and Litomerice 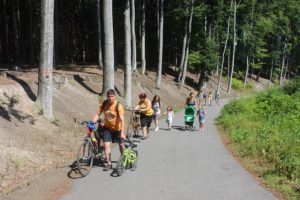 a panorama from one of the many view points