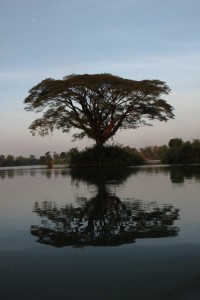 Island group upstream of a major waterfall in the Mekong River has turned into relaxed back-packer paradise.

Si Phan Don means “4000 islands” in Lao. And Don Khone is one of them, located pretty much to the southern, downstream end of this Mekong area, and just above the Li Phi Falls. Together with the Khon Phapheng Falls, which as far as I can see are caused by the same rock formation, a little further to the east, this forms a monumental obstacle to navigation on the river, killing any prospect of a major waterway trade route to China. 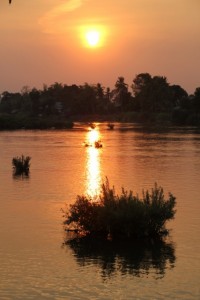 The falls aren’t that high, but do push a significant amount of water through the many channels in the rock, to the extent that the Khon Phapheng Falls are considered the largest falls in South East Asia by volume. No surprises here, we all knew that the Mekong was a big river. The 4000 islands are obviously upriver from the falls, and many are only an island in the dry season, when the river level falls significantly; in addition there are a few larger, permanent islands. On Don Khone and neighbouring Don Det the French built a short railway to facilitate transport of goods that were offloaded and hauled up from the downstream side of the falls, to be brought by train to a port facility on the upstream side.

These days the islands are largely a chill-out facility for backpackers, many of whom spend their days smoking pot, wiling away in hammocks – “vertically challenged”, as the Lonely Planet calls it. And I must admit that there is a certain tranquility hanging over this place that invites slowing down a little further even from the already pretty relaxed general Lao pace. 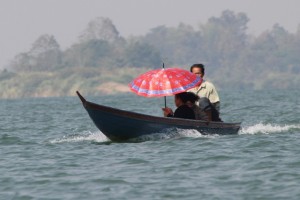 And there is plenty of traffic in between the islands 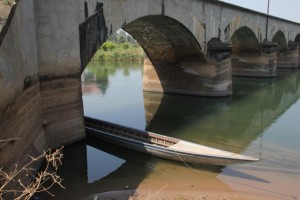 The railway bridge, without railway these days 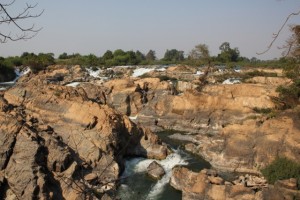 The beginning of the Li Phi Falls 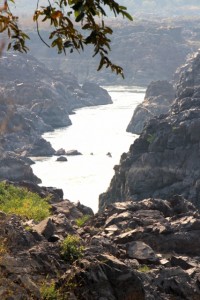 and the channel on the other side 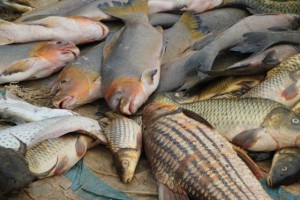 Plenty of rich catch from the Mekong