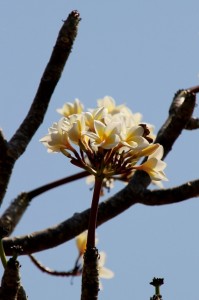 Frangipani flower on a tree

An active Buddhist temple complex on the banks of the Mekong River.

It is hard to believe that the town of Champasak is also the former capital and Royal Seat of Southern Laos. There is little of the grandeur left, if it ever existed, in this little village on the banks of the Mekong; everything happens along the only paved road, but it is charming enough, friendly, low key. It is located on the west bank of the Mekong River, ie from the main road south you have to cross the river to get there. Apparently a road from the bridge at Pakse, 20 km north, is being built, but until this is completed, crossing is by ferry, a rather basic affair that requires a leap of faith, especially when it gets dark at night. 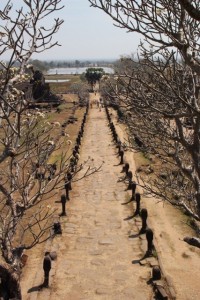 Approach to the Wat Phu complex, along the pillared walkway 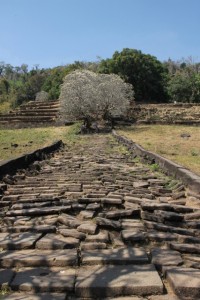 Stairs to the active temple on the hill

The reason to come to Champasak is the Wat Phu complex, active since the 6th Century as a Hindu site from a pre-Ankhor Khmer civilization, and in the 15th Century or so turned into a Buddhist temple. Apparently Wat Phu means Mountain Temple, which sort of implies some climbing: after a stone path towards several buildings at the river valley level, a steep flight of stairs leads up the mountain, to a small temple and a shallow cave. Along the stairs numerous Frangipani trees provide a wonderful sight, and smell, creating a very special, spiritual atmosphere – although the Frangipani smell is occasionally crowded out by incense, which is being burned a various intermediate offering sites. Worthwhile the effort to get here. 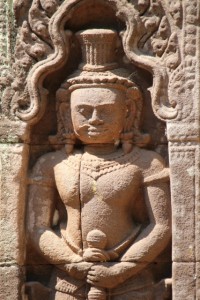 Bass relief in the wall of the temple 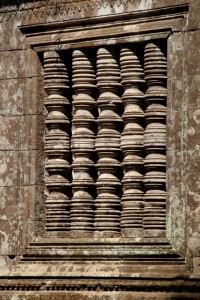 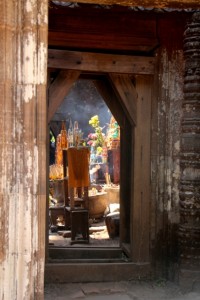 The temple itself is a simple structure, active with offerings 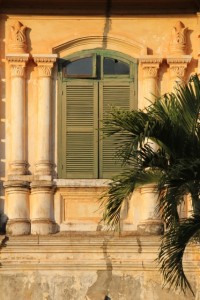 Some remnants of Champasak as Royal Seat, perhaps?