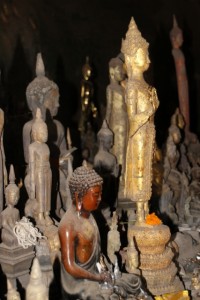 Part of the sculpture collection inside the Pak Ou cave

A visit to Buddhist-sculpture packed caves along the Mekong River, and a whisky-distilling village that mostly sells weavings. Pak Ou caves, from the outside…..

An hour or two upriver from Luang Prabang are the Pak Ou caves, the caves at the mouth of the river Ou, a tributary of the Mekong. For the uninitiated in Buddhism these caves, which contain thousands of Buddha sculptures, are not particularly interesting, but they are a nice enough outing from Luang Prabang – the trip on the Mekong River is worthwhile in itself. The collection of sculptures comes from centuries of offers from people who specially traveled to this cave, minus the ones that have been eaten by termites, smashed, vandalised or plainly stolen. People are the same all over the world. 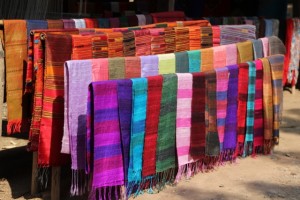 “Whisky Village” does more business in weavings that is distillate 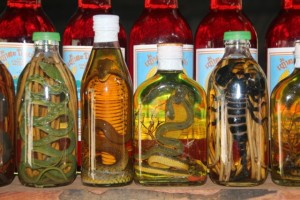 Some whisky is being produced in the village, though, and is being attractively bottled!

On the way boats will stop at Ban Xang Hai, popularly known as “whisky village”. Apparently the village used to make jars, but they have now shifted to making whisky: perhaps “jar village” didn’t have the same pull as “whisky village”. Well, we did find, all the way to the back, a primitive distilling set up, where strong smelling fluid did drip into large vessels and where bottles of rice whisky were for sale, including special ones with vile-looking animals inside – snakes, crickets, and many other indefinable creatures, quite likely drunk and most certainly dead. But the rest of the village was totally dedicated to selling cloth, scarves, skirts, and what else you can weave. In any case, the whisky is quite undrinkable, even without animals inside. 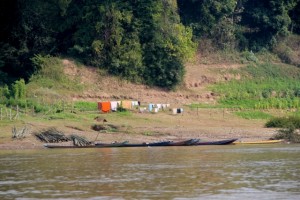 canoes lined up along the river bank 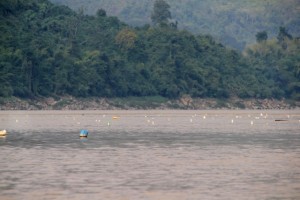 But the best part of the trip remains the river itself. Everywhere there are people, no matter whether the banks are lush and green or dominated by rocky outcrops that just stick out above the water – imagine what could be in store just below the surface!. Fishermen are working with rod or checking their nets, canoe drivers are ferrying people from one side to the other, and the ubiquitous river boats in varying sizes, plough up and down, with or without tourists. Somehow, utterly relaxing to sit in one of them, and let life pass by. 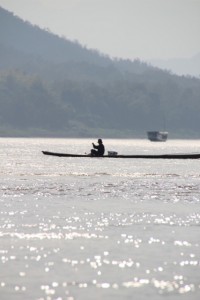