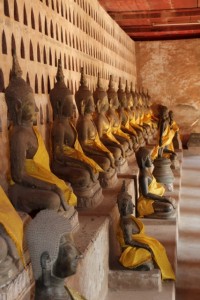 The sleepy capital of Laos has plenty of old, atmospheric buildings next to a smattering of modern development.

If there is one sleepy capital in the world, it must be Vientiane. Having said so, the town is slowly waking up, just. So here and there you see signs of development, some taller, larger buildings are going up, a new department store, the occasional international hotel, a flashy park along the banks of the Mekong. The Laos stock exchange, a modern white building with dark glass, opened early 2011, with no less than two listings, apparently both heavily over-subscribed. But the majority of downtown Vientiane is still very low-rise, a mix of run-down French colonial architecture, a few newer Chinese buildings and Laotian construction, along narrow tree-lined streets; all together not very organized. Cables everywhere, traffic slightly congested because of tuk-tuks and scooters, and a handful of 4×4’s  – but not too bad, nothing compared to Bangkok or Jakarta. 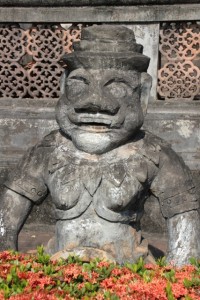 Stone sculpture in the garden of Haw Pha Kaew museum 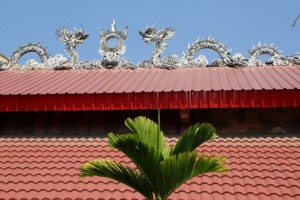 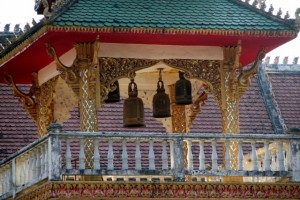 Bells at another temple in the centre of Vientiane

Many of the once attractive colonial buildings have a new role, nowadays, as National Library or Museum, like the former French Governor’s residence. They are clearly in need of some restoration, but with some goodwill one can appreciate the former glory. There are also a few quite attractive Buddhist temples, active and inactive. The oldest one is the Wat Si Saket, a mostly wooden structure, in a compound that distinguishes itself through the many small niches filled with miniature Buddha images, collected over hundreds of years. Another one, Haw Pha Kaew, has been turned into a museum, the collection of which is much less interesting than the building itself. 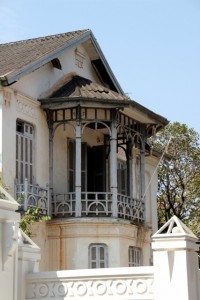 The old French Police Headquarters is now the National Library

All in all, a great place to spend some time, not in the least because of the relaxed atmosphere, and the excellent Lao food available.