The Larco Museum, Lima The Masks 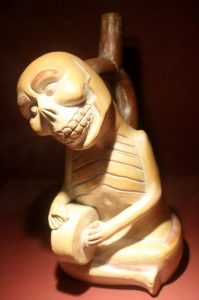 ‘the advertiser of death’, a sculpture in the site museum of Sipan in Northern Peru

Every town in Chile and Peru has one or more archaeological museums, many of which are true treasures of ancient art and artefacts.

One of the most interesting elements of traveling the Costa Pacifico are the local museums, and then especially the archaeological and anthropological museums. In itself these are subjects that should be on the agenda of every even mildly curious traveller, in order to get a feeling of the rich history of these countries, but in Chile and Peru the artefacts on display are also works of art in their own right. Every small, delicately painted vase or carefully modelled ceramics bottle is unique, whether displaying everyday scenes of harvest or fishing, or religious representations of the Gods and half-Gods. Obviously, some are artistically of a higher level than other pieces; the works of some cultures, like the Diaguita, are more attractive, and pleasing to the eye, than others. But the message is that these are not only of archaeological and anthropological interest, but also a fabulous representation of the local history of art, and a tribute to their anonymous artists. 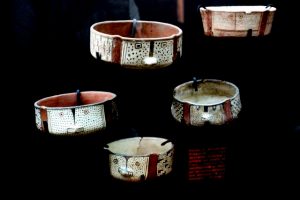 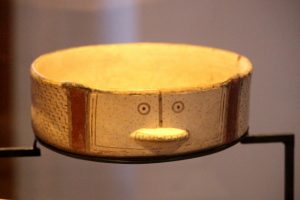 There are innumerable museums along our Costa Pacifico route. Every self-respecting town has one, either government- or municipality-run or privately owned. I would imagine that quite a few collections must have a dubious origin, to say the least: personal collections from rich citizens, that have been donated to the town, or to a foundation, but how they were collected remains vague. Whereby noted that especially Peru has suffered huaqueros – grave robbers and tomb raiders – for centuries, not only Spanish colonists looking for gold and silver to melt down, but also local villagers that established a side business by offering artefacts onto the black market to anybody who was prepared to pay. In the process ruining any archaeological detail of the find, of course. 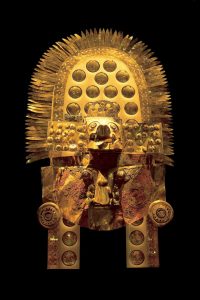 one of the few pictures I found on the Internet, of treasures in the no-photography Museo Tumbas Reales de Sipan

Having said this, the opposite is also true, especially in the  Museo Tumbas Reales de Sipan (the Royal Tombs of Sipan) in Lambayeque, Northern Peru, where not only the spectacular treasures found in these tombs are being exhibited, but also real size models of the tombs themselves, which have been meticulously reproduced in the way there were found. One of the best museums we have seen, but unfortunately photography was strictly forbidden, so I cannot share more with you. Many of the archaeological sites, however, do have their own, however small, site museum, of which I have published a few pictures in the individual blog entries. See for instance the site museums of Sipan and Tucume, near Chiclayo in Northern Peru, and the one of Chan Chan, near Trujillo. 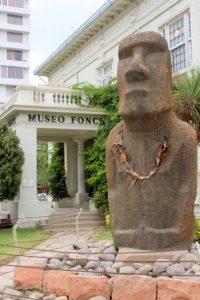 a Moai sculpture in front of the Fonck Museum in Vina del Mar, Chile

Some of the town museums, too, have been woven into the text of the blog entries. Notably the excellent Fonck Museum in Vina del Mar, and the local Archaeological Museum in the Azapa Valley, near Arica, both in Chile, and the Museo Didactico Antonini in Nasca and the superb Museo National de Sican in Ferrenafe, as well as the remarkable sculpture garden of the Museo Regional de Ancash in Huarez, all in Peru 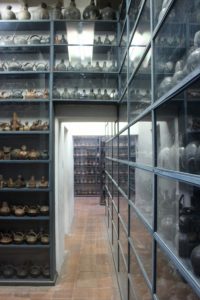 the depot in the Larco Museum, Lima 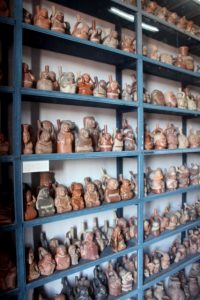 with cupboards full of ceramics artefacts 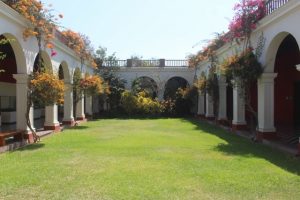 the National Museum of Archaeology, Antropology and History in Lima, an attractive building

The wealth of artefacts – bottles, pots, vases, masks, jewellery and whatever more there is, from the Inca era ending in 1532 to Moche and Chimu and Recuay cultures, and many more, in some cases dating back to over 3000 years – could not be better illustrated than in the Larco Museum in Lima, where the depot, cupboards and cupboards stacked full op pottery, is accessible to the public, too. Luckily, the curators here have made a selection of the best pieces, but even this collection is overwhelming, as it is in the other two bigger museums along our route, the National Museum of Archaeology, Anthropology and History, also in Lima, and the Museum of Pre-Colombian Art in Santiago. So I have made my own, humble selection, in three separate entries. But if you ever have the opportunity, go and visit those museums for yourself. You probably should also visit the Museo de la Nacion in Lima, the biggest museum, which however was closed for renovation when we were there. 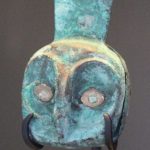 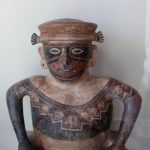 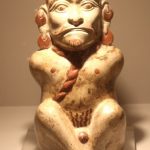 the Larco Museum in Lima

Oh, and I allowed myself my own, online exhibition of Costa Pacifico masks, one of my personal fascinations. 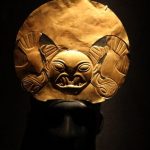 One more thing on the museums: I readily admit to another fascination, with cemeteries, no doubt obvious by now from reading the Costa Pacifico blog, and from reading some of my other blogs, too. That fascination extends to the mummies found in the tombs of the cemeteries. Many museums in Chile and Peru have spectacular mummies in their collections, sometimes more than one, but nowhere is the richness of the mummy past better demonstrated than in the Azapa Valley museum mentioned above, where almost 100 mummies have been stored in a climatized room, bench after bench, and in the Museum in Leymebamba, in the Amazonas province of Peru, where they are, literally, sitting on the shelves. 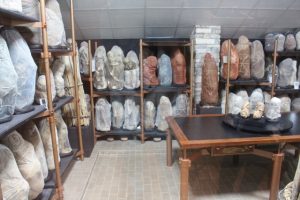 the mummy room in the museum in Leymebamba, Peru 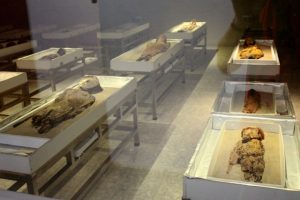 mummies in a room in the Archaeological Museum in the Azapa Valley, Chile