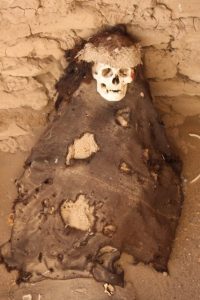 one of the mummies in the carefully restored Chaucilla cemetery

The desert around Nasca contains the somewhat overrated remains of religious complexes, and several vandalised cemeteries, one of which has been restored, showing a scary collection of mummies.

Of course, the Nasca left more behind then only the lines. Their most important religious complex, Cahuachi, is some 35 km out of town. All the photos of the complex suggest that it is right in the middle of the desert, which would have added to its mystery, of course, but in fact all photographers were standing with their backs to the river, which flows quite close to the temple – and more importantly, has been a place where people have been living, indeed, since Nasca times. 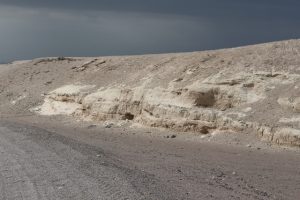 driving through the desert, where it threatens to rain – but it doesn’t

The complex is mostly covered by sand, still. Apparently, there have been some 36 pyramids identified in an area of 24 km2, of which only four have been uncovered. And, unfortunately, restored, which takes a lot of the authenticity away. A chronic lack of money, or lack of interest to provide the money, means that work on the complex continues for only one month a year. As with so many sites in Peru, you cannot just wander around, but need to stick to a well-marked path, which further reduces the fun, of course – staring at a complex of low walls from outside becomes pretty boring pretty soon. 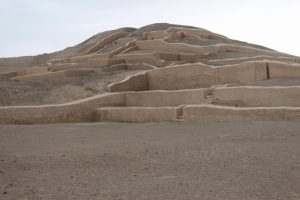 the main pyramid at the Cahuachi site 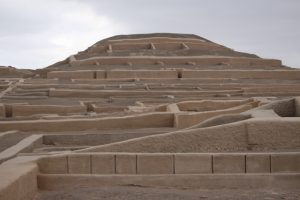 another of the pyramids, walls restored 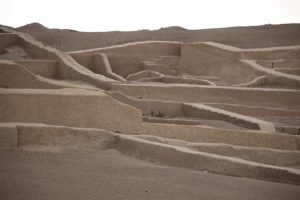 details inside of this religious complex 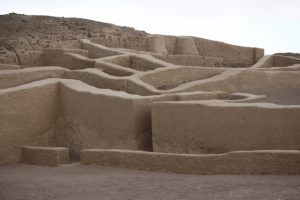 Nearby is an ancient cemetery, one of around twenty found in the desert here. Dating from Nasca times, and perhaps even older, Paracas times, these contained mummies in fetal position, accompanied by pottery and utensils to prepare the deceased for entry into the second life – this was why mummification was so important, the body had to be kept in perfect condition for the next phase. Quite predictably, all these cemeteries have been vandalised by grave robbers. In this case, someone has grouped a skull and a couple of bones together to make it ‘attractive’ for tourists, or at least for the photo to attract the tourists. The place is, literally, scattered with human bones, well beyond the rather uncouth little collection. And pottery shards, no doubt all original and also over a 1000 years old. And cotton cloth used to wrap the mummies, and lots of other signs of burials. Every dip in the landscape may represent another grave. Or not, who knows. 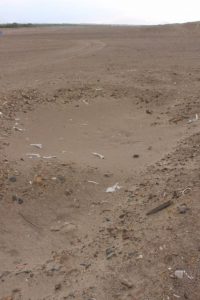 scattered bones at nearby cemetery 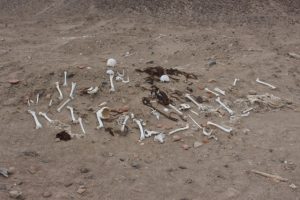 where somebody took the trouble to rearrange some of the remains 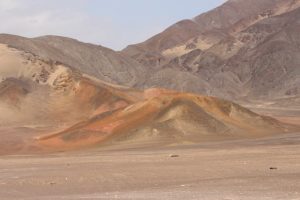 the drive to the Chauchilla cemetery 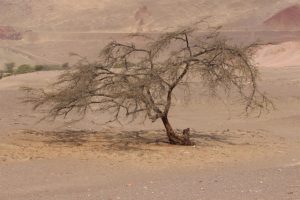 lonely tree in the desert

The cemetery of Chauchilla, another Nasca burial site, looked until not so long ago the same. But here some of the mummies have been carefully restored into their holes, together with some of the pottery found on the site, to create an image of how these graves may have looked at the time. And you know, scattered bones are no fun, but if put in context, like here, it actually turns into a fascinating place, with perhaps 20 or so mummies. Some with very long hair, others with bodies still well-wrapped in cotton woven sheets; some children; all with a skull on top. No entirely original, perhaps, as the mummies at the time will have their heads wrapped inside, and between their knees, but then, without the skulls it wouldn’t look so dramatic. And how else are you going to attract the tourist? 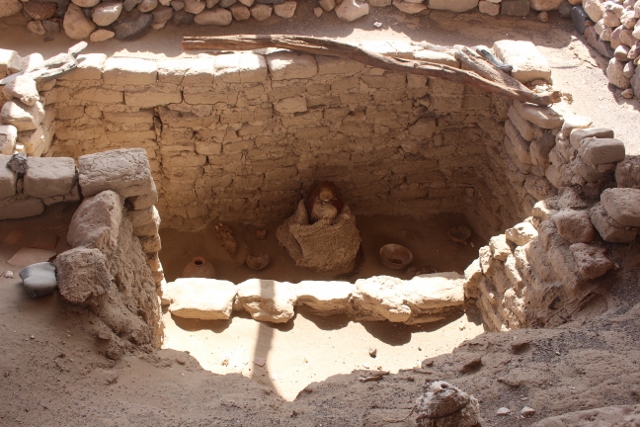 a deep tomb, with mummy 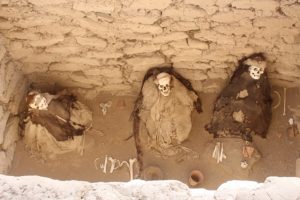 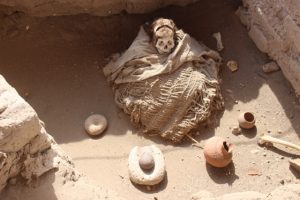 and utensils to take to the next life 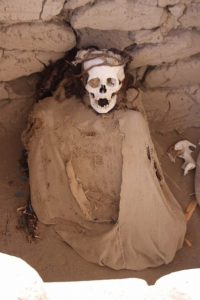 they have a way of staring at you! 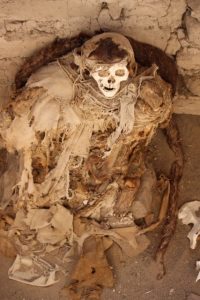 some of the cloths is not ging to last much longer 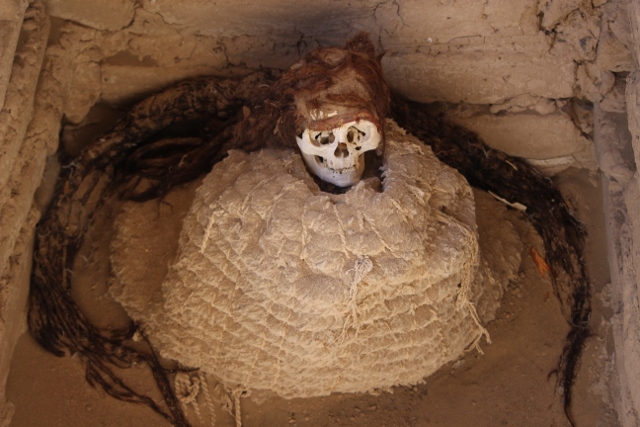 note the very long hair, real hair, either attached to the head or as a wig 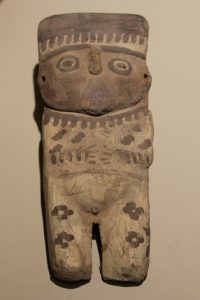 statue in the local museum 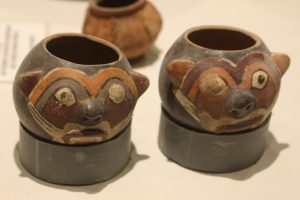 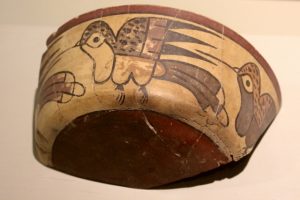 another piece of painted pottery 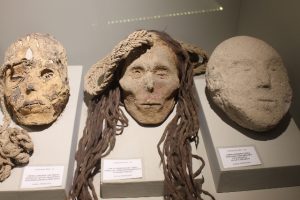 these are trophee heads 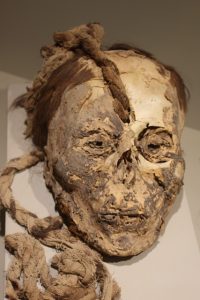 captured enemies, hole in skull, and rope to carry 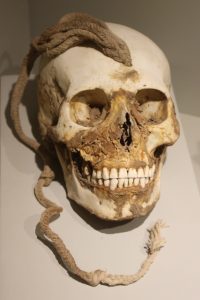 to show off your bravery

Of course, the local museum houses all the really interesting objects that have been found in the neighbourhood (and that have not been shipped off to Lima). And then you start appreciating the figurines, and the pottery, beautifully painted and etched. And the cotton wraps, for instance, many still with vibrant colours, many with knotted decorations along the edges. It is not only that this has been done long ago, but that it has been preserved so well, in this dry climate.

There is more than just the lines, in Nasca. 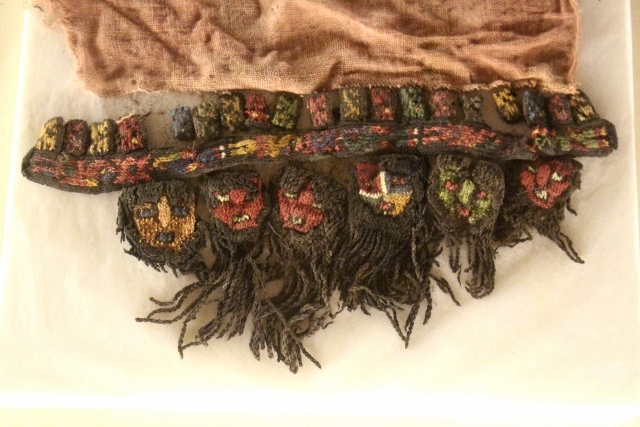 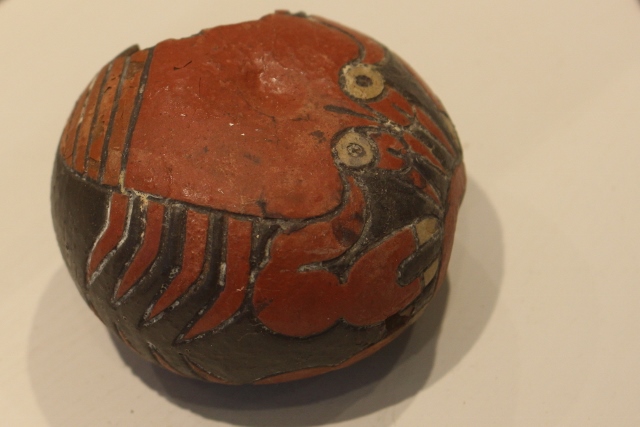 and they even had a one-armed crab, in those days!

One Response to 37. the mummies