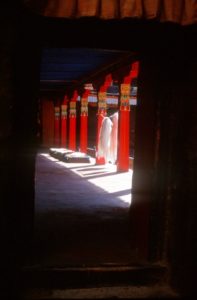 courtyard in the Tashilunpo monastery

The second-largest Tibetan town is pretty Chinese, in fact, and the only reason to come here is the impressive Tashilunpo Monastery.

Shigatse is the second largest town of Tibet. The two-hours’ drive from Gyantse passes through a completely different landscape, along the valley of a small river, the Nyang Qu. No big mountains, hardly a bend in the road, but no less entertaining a drive. Left and right the people were working the fields, as always colourfully dressed despite their working environment, with the animals again decorated with plumes or flags on their heads, and ribbons around their necks. The area is obviously richer than what we have seen so far, houses and farms are larger, often two stories high, and with large windows. 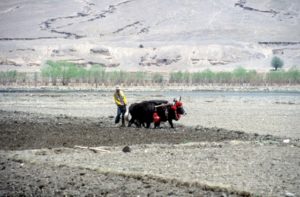 working the land, outside Shigatse

On the way to Shigatse is the lovely small Zhalu Monastery, in a tiny village off the main road. Even here, so remote, the Red Guards and the Cultural Revolution had reached to ensure damage was done. Unbelievable, what hatred against Buddhist religion must have motivated these people; it must have taken more effort to get to this little village that to smash up the place. 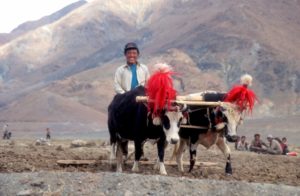 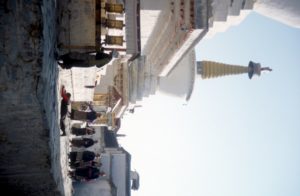 pilgrims at the Tashilunpo Monastery 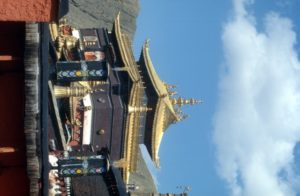 part of the Tashilunpo Monastery 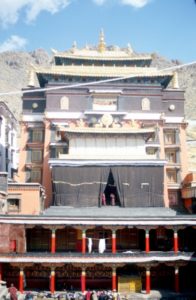 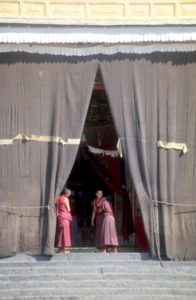 monks high up in the monastery 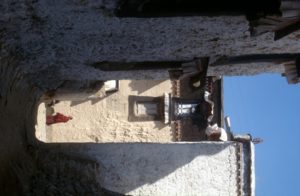 the small streets around the monastery 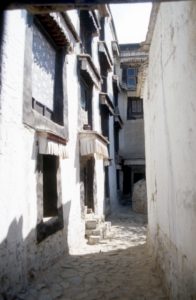 more streets, and houses around the monastery 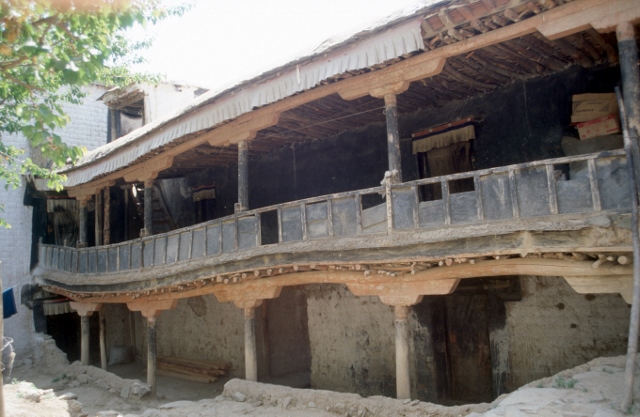 not all of the monastery is in tip-top condition

Shigatse is a modern Chinese town, with, according to our guide, not 80,000, no, 82,000 inhabitants. Precision is a virtue. The main reason for getting to Shigatse, apart from a convenient place to overnight, is the Tashilunpo Monastery, the largest monastery in Tibet and the seat of the Panchen Lama. The Panchen Lama is the traditional teacher of the Dalai Lama and the only other official who is succeeded through reincarnation. The current Panchen Lama, some eleven years old, is subject to a major controversy. He is the candidate forcefully pushed by the Chinese, who decided at the time that some religious freedom wouldn’t be a bad thing in Tibet. This boy occupies the office at the expense of the generally recognized reincarnation, another young boy, who was arrested and deported by the Chinese the day after the Dalai Lama had openly expressed his support for him. Boy and family have since disappeared, whereabouts unknown. So much for religious freedom, then. The monastery itself is a fabulous building, a huge complex with many little alley ways and courtyards, the one even more picturesque than the other, all in front of the main temple buildings. The complex also houses the stupa with the remains of the 10th Panchen Lama, who died in 1989. The stupa was build five years later, allegedly at a cost of almost 8 million dollars, a sum of money that quite possibly could have been used slightly more effectively in a country as poor as Tibet. But here nobody questions religion, it is a way of life and everything else depends on it. 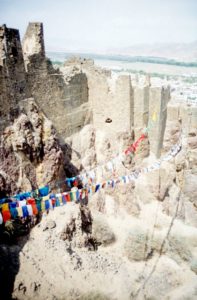 the ruins of the Shigaste fort 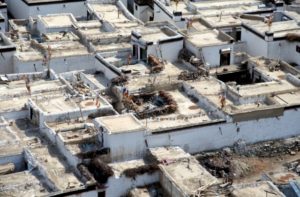 Shigatse suburb from above

Shigatse has not much more to offer than the temple. There is a castle, according to our guide book now completely in ruins. Upon checking out, our guide book proved correct. However, from the ruins one has a fantastic view over the town. And the few remnants of the castle, mainly the huge walls which mend into the mountain side, are impressive enough in itself to warrant the climb up the hill. The much touted market was actually a lot less impressive, in reality not more than an average Chinese market, selling everything and nothing. The only section that caught our interest briefly was the artifacts section, all ‘very old, real Tibetan’, but hugely overpriced. I had the strong impression that most of the stuff for sale actually comes from Nepal. Selling is done by very aggressive salesmen and women, who would not take ‘no’ for an answer, grab you by the arm instead, and will not let go – however, screaming ‘help, help’ did indeed help, and we managed to move on.

The Shigatse Hotel is a truly communist bastion, built in 1985 to a grandiose design, far too big for the limited amount of tourists they receive – forget about business travelers to Shigatse. Yet, the staff had not been reduced to more reasonable numbers, and loads of waiters and porters, and what have you, were hanging around. That is no reason to smile, of course, or to be helpful in any way. How different from the friendly Ketchu Hotel in Lhasa; but that was a privately run enterprise. As there was little else to do, we played some table tennis, which is not a good idea at 3900 m altitude. Unfortunately, the more relaxing pool table had lost its billiard balls lost long ago.

Lunch in the hotel was rather Spartan. We were the only two guests in the restaurant’s huge dining hall. There was no menu, and what ultimately arrived on the table was not particularly appetizing. The pork turned out to be sliced bacon left-overs from breakfast. However, lunch was still a feast compared to our evening meal, which was the most revolting I have had in a long time. The little restaurant that we selected was actually a cover for a brothel, they did not really have a cook. In the less than half an hour that we spent inside we saw at least 20 conspicuously dressed girls disappear upstairs. And no other dinner guests.

next: to Mount Everest basecamp 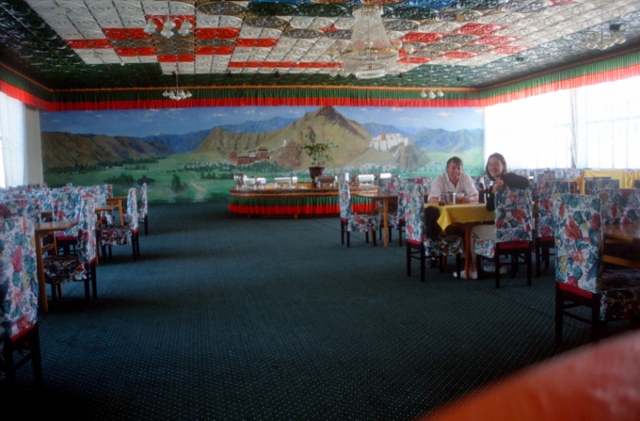