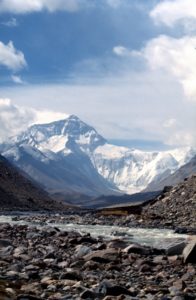 The Friendship Highway, past Latse and Shekar, ultimately brings us to the turn off for Mount Chomolungma, Mount Everest to most: a fabulous sight.

After Shigatse, we joined the Friendship Highway, the road that connects Tibet with Nepal. Well, ‘highway’ only refers to altitude; in places it is indeed surfaced with tarmac, but soon, after the truck stop town of Latse, it turns into a dramatically poor condition dirt track, washed away in many places. Clearly four-wheel drive country. 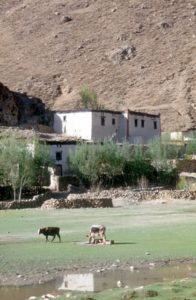 But even before Latse we had already crossed a 4800 m high pass. The mountains are back, with impressively high peaks on all sides, however, with remarkably little snow. This is just desert landscape, with hardly any precipitation, and only the highest mountains are snowcapped.

In this desolate environment is the Sakye Monastery, highly acclaimed by other tourists, although in my view actually somewhat disappointing. However, the road to Sakye, especially the 20 km track south of the highway, was truly beautiful, with the now familiar little white-washed villages perched against the foot of the mountains, people busy in the fields, and sheep and yaks grazing in the more inhospitable areas. The region is probably poorer that what we saw before; horses have been replaced by donkeys here. 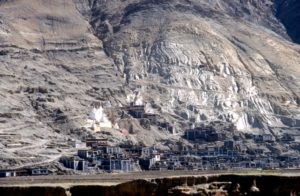 Sakye Monastery perched against the mountains 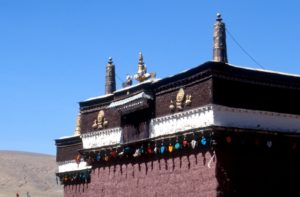 part of the Sakye Monastery 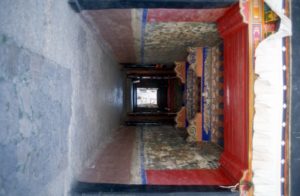 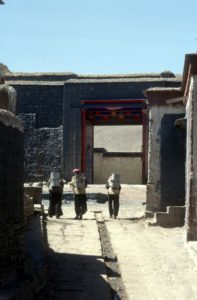 also inside the Sakye Monastery 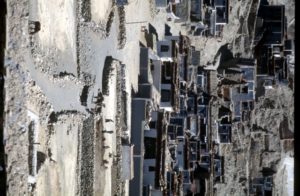 the blue-painted village in front of the monastery

Past Latse we crossed the 5260 m high Gyatso La pass, probably the highest point during our trip. It is only at this altitude we started to observe some snow and ice along the road. Nevertheless, the scenery from the pass was breathtaking, for as far as we had any breath left, and it got even better from the nearby hill, that supported a 360 degree view, albeit a cold and windy one. And there is abundant snow on the peaks on either side of the pass, the Pulha Ri and the Naargwan G (?), both just over 6400 m.  Driving down from the pass to Shekar, where we were to overnight, we got our first glimpse of the real thing, the real high peaks of the Himalayas, far in the distance and largely cloud covered. 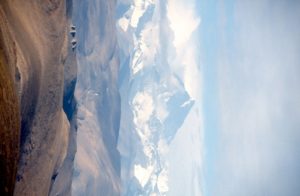 the view from the Pang La pass, with Mount Chomolungma in the distance Shigatse had not been our favourite place, but it turned out to be paradise compared to Shekar, a small village located just before the turn off to Everest basecamp. The only reason to come to Shekar was to sleep, in one of the very few hotels in the surroundings. The hotel had a distinct look of an army camp, probably its earlier origin, although the small cubicle rooms were equipped with relatively new bathrooms. The showers, however, were of no use, without hot water, and despite its newness the sink was leaking. After three hotel experts had a go at repairing it, we ended up with a bucket under the, still leaking, sink, exactly like our own initial solution. As the restaurant was closed, and the local eateries in the miniscule village looked distinctly unappetizing, we resorted to the ultimate travel solution in China: instant noodles from the local shop. 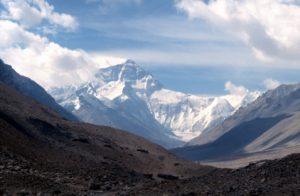 another view of Mount Chomolungma, from the road

All hardship was quickly – though temporarily – forgotten early the next morning, when we got to the pass leading to the Everest basecamp. At seven in the morning, at 5150 m high Pang La pass, we had a fantastic view over some of Himalayan’s greatest peaks, four of them well over 8000 m, and dominated by what the Tibetans call Mount Chomolungma, also known after the former head of the British Indian Survey, Sir George Everest. The road down from the pass to Everest basecamp is a very poor quality dirt track, mainly following the river valleys, sometimes precariously built along the mountain walls, and, for the last hour or so, predominantly scaling some of the most impressive alluvial fans I have ever seen – mountain debris resulting from millions of years of flash floods. Not the most comfortable road surface! And even along this remote road one finds small villages, and ever hard working people, who must live one of the harshest lives imaginable, at above 4500 m. 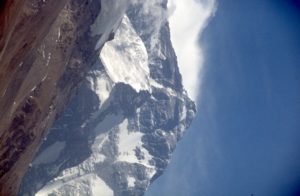 It takes some four hours to reach the camp, and were we lucky that we had left early! All the way we had magnificent views of the snowy peaks on the sides, and of the mighty Chomolungma, almost cloud free. The camp itself is a collection of colorful tents and some basic facilities like latrines, which, judging from the excrements outside, are not always used. The viewpoint is from a shallow hill, from where just watching the mountain is the thing to do. Initially against a bright blue sky, probably the most magnificent sight I have ever seen, but we then saw the peaks disappearing in the clouds at a frightening speed. Which was the time to turn back.