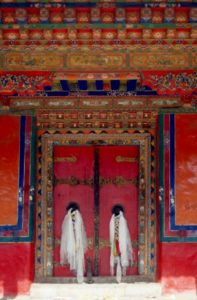 a door in the Norbulingka summer palace

The highlights of Lhasa are, of course, the Jokhang Temple and the Potala Palace. Just for these two, you should already be aiming for the Tibetal capital.

In terms of temples the top of the league is, without doubt, the 1300 year old Jokhang Temple, in the heart of the Barkhor area, the Tibetan centre of Lhasa. It is one of the few temples that still looks to be in its original state. It apparently survived the Cultural Revolution, as it was used as an army base. The main temple building, a largely wooden structure, is surrounded by a circuit of copper prayer wheels, that are being turned clockwise by the passing pilgrims, also rotating clockwise. The temple’s courtyard is full of people, some having a picnic, others praying in isolation, either leaning against a pillar or turning their hand-held prayer wheels relentlessly. The occasional pilgrim can be seen prostrating, stretching belly down on the floor. The best view of the courtyard is from the roof, where one can quietly observe the spectacle below, and also the busy Barkhor Square and the distant Potala Palace.

Johkang temple at the Barkhor Square 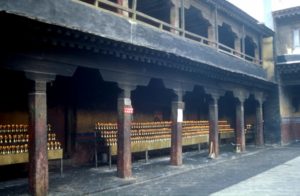 candles inside the Johkang temple 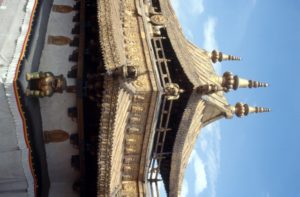 the upper part of the Johkang temple 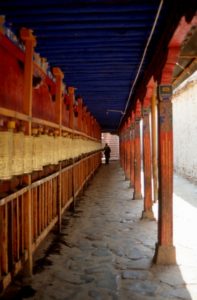 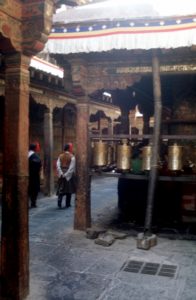 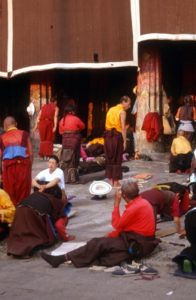 pilgrims inside the temple 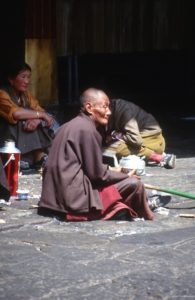 people gathering inside the Johkang temple 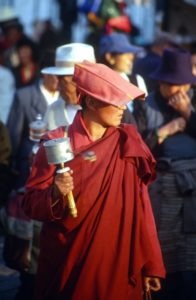 monk circling the outer circuit around the Johkang temple 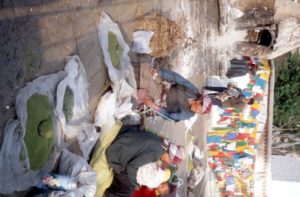 market women on the Barkhor Square 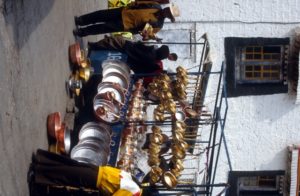 copperware stall outside the Johkang temple

Outside the temple a second pilgrimage circle is in operation, a swarm of people walking around the temple complex, again clockwise. Here commerce is included in the process, the streets around the temple lined with stalls selling everything one can imaging. The Tibetan artifacts – invariably called antiques by the local dealers – are the most attractive, but after having touched a few samples one gets the same feeling as one gets inside temples when touching the rails along the stairs: that of yak butter sticking to your hands. Obviously, we could not withstand the temptation, and ended up with scores of useless rubbish, which we subsequently wrapped in shirts to protect them from breaking during our further travels. The result is a series of yak butter smelling shirts, and they will probably do so for the rest of their lives. 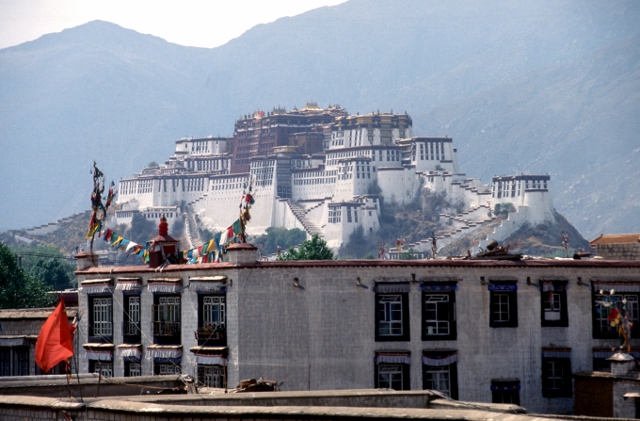 the Potala Palace seen from the roof of the Johkang temple

Lhasa supports two palaces. A visit to Norbulingka, the Dalai Lama’s summer palace, a weird and seemingly unconnected group of buildings located in a huge, but poorly kept and overgrown park, is not very interesting. Yet, the park is obviously  popular, as evidenced by the rubbish everywhere, plastic bags, paper, food rests. The buildings are relatively new, yet they have a very old fashioned look. However, the interior is incomplete, and compares poorly with an English country house. And, as always, everything is dirty and greasy. Obviously, the Dalai Lama hasn’t been here for a while. 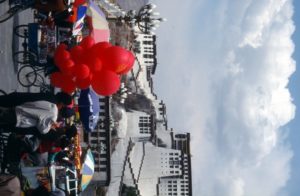 balloons in front of the Potala Palace 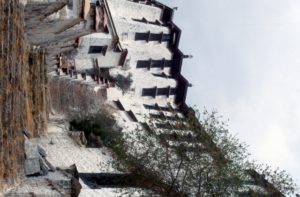 stairs in front of the Potala Palace – not the main entrance! 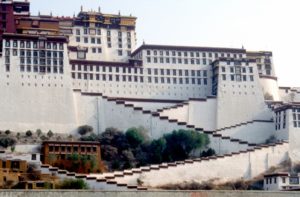 only one side of the palace 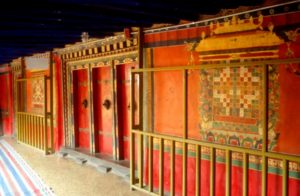 wooden panels and doors inside the Potala Palace

The Potala Palace, of course, falls in a different league, and is definitely one of the architectural highlights, if not the highlight of Lhasa. An enormous building, with over a 1000 rooms, its thirteen stories tower high above the city, visible from almost everywhere. The main building, called the White Palace, was built by the 5th Dalai Lama, often referred to as “the Great Fifth” on account of a long and successful reign uniting a divided Tibet again. He took up residence here in 1649. The Red Palace, the building rising from the centre, was added in 1693 and concentrates the religious functions: the prayer halls and the many chapels. The problem of fast lane pilgrims and slow lane tourists has been solved here by setting off both streams in opposite directions. That helps (sic)! Unfortunately, the palace is very popular with both tourists and pilgrims, and the chaos so created is absolutely complete, not helped by the fact that some of the rooms need to be entered and exited through the same door. Yet, the place should not be missed; it has so many unique features, from architecture to interior decoration, murals and the famous stupas, individual tombs for almost all the Dalai Lama’s.

next: West to Gyantse 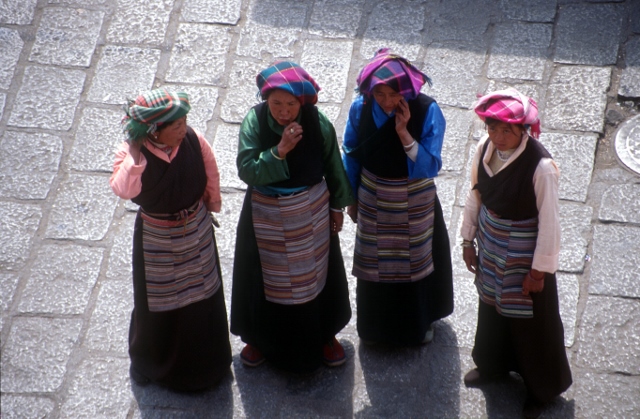