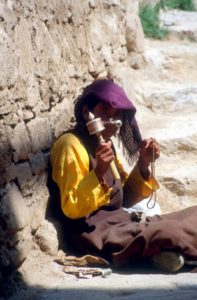 prayer wheel and prayer beads is all you need

The Tibetan capital, where Chinese and Tibetan culture exist in parallel, is surrounded by several great monasteries, like Drepung and Sera

Lhasa is not a romantic, mysterious city of unsurpassed beauty. Barkhor Square, supposedly the picturesque center of the old Tibetan quarters, in reality is a dump, with the smell of sewerage everywhere, persistent beggars grabbing you, and anybody else they can get hold of. Rubbish in the gutters, human excrements around every corner. Traffic is a complete chaos – in terms of driving Tibet is definitely completely assimilated into China. Minibuses, taxis, four-wheel drive vehicles, especially Toyota Landcruisers in a broad age range, and pedicabs fight for their place in the streets, generally determined by size and, in the case of the Toyota Landcruisers, age. Bicycles and pedestrians are a given, and add significantly to the chaos by not applying common sense in their movements, thereby voluntarily jeopardizing their lives continuously. One should not be surprised to be overtaken on both sides at the same time. The Tibetans probably drive on the right hand side of the road, but this is not obvious at all. Taxis, if empty, use their horns to attract customers, when occupied they use their horns to drive off all the other traffic, and if they have no other reason at all, they horn to greet a friend. Bus drivers do the same. 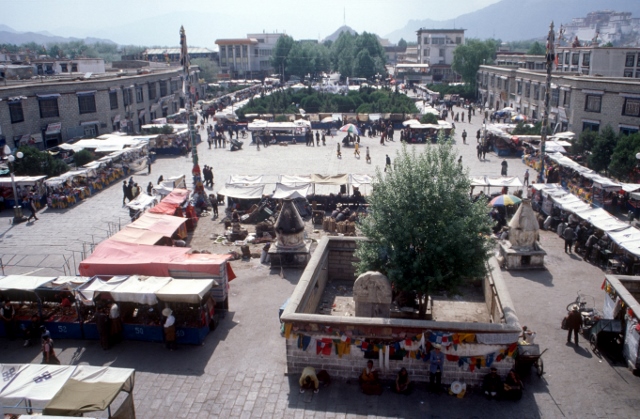 the market at Barkhor Square

To indicate that a restaurant has a television, one of the loudspeaker boxes is placed outside, and the volume is turned up. Hordes of people then gather around the door, without actually entering, to watch the television. Video games have also reached Lhasa, especially in dark shops along the narrow alleys of the Barkhor. As far as the sounds are concerned, they can be followed from outside, too. But beyond the Tibetan quarters the city is Chinese, with all the Chinese characteristics: the inevitable markets, the restaurants, and the first shopping malls appearing. 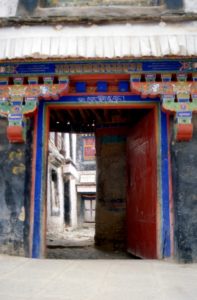 door to one of the courtyards at the Drepung monastery 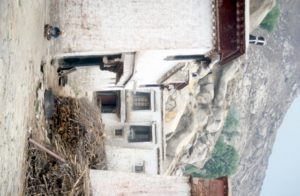 the Drepung monastery is in fact a whole village 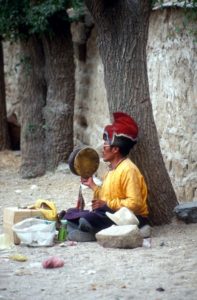 pilgrim at the Drepung monastery 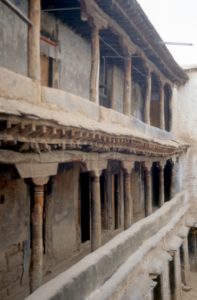 not everything is shining at Drepung

But Lhasa has its jewels, which does make it a very special place indeed. And not only the Potala Palace and the Jokhang Temple, the most famous sites; there are many lesser known places well worth a visit. Drepung Monastery is a huge complex perched against the mountains just outside town. Once again, visitors are predominantly Tibetan pilgrims, the foreigners are very much in the minority. This creates a problem, as the pilgrims generally go fast, clockwise around the temple turning prayer wheels in the process, as if they have a train to catch, whilst the tourists like to spend some time looking around, which essentially blocks the flow. The pilgrims are only interested in the large Buddha sculptures, most of them new, slick and in European eyes rather tacky. Most statues are bronze or brass, dressed up colourfully, faces painted gold and hair painted blue. Further decorations include plastic flowers, and the accompaniment of the invariable yak butter sculptures does not help. Have you seen one, you have seen them all. 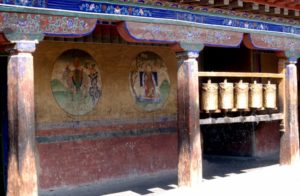 the prayer wheel circuit at Sera 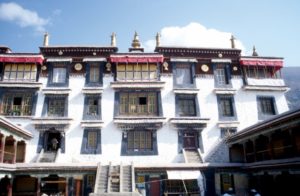 the main building inside the Sera monastery 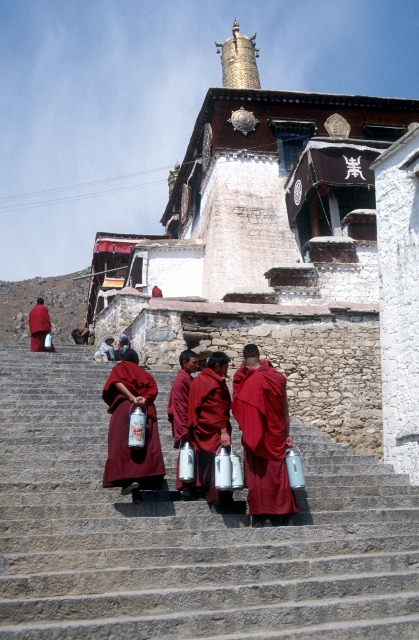 monks at the side of the Sera monastery

The pilgrims have no eye for architecture, for the frescos on the walls, for the intricately painted or embroidered thankas, silk or linen frames of Buddhist pictures, or for the lesser sculptures, stacked away in corners or cupboards. Yet, many of the thousands of figurines are beautifully made, and they are all different, no mass production here. Temples usually consist of a main assembly hall, with pillars to support the roof, rows of low benches for the pilgrims, and a number of smaller chapels on the sides. The inside of the temples is often crudely protected against the many visitors, in the best case the painted pillars and walls have been fenced off with chickenwire to just above eye level, to ensure that the frescos cannot be touched, in other cases plastic, or just cloth has been used, so that you cannot see a thing at all. Walking around a temple is in any case a hazardous undertaking, as the pilgrims go around with burning yak butter candles, spilling the wax generously on the floor. And they have done so for years. Especially some of the steeper stairs are pretty hairy, not in the least because the hand rails are just as slippery. Yet, wandering around is the thing to do, here, in between the many colorful people, mingling with the purple robed monks. Occasionally one spots a sizable rat, slipping away into a dark corner. 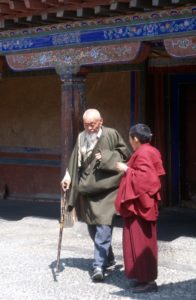 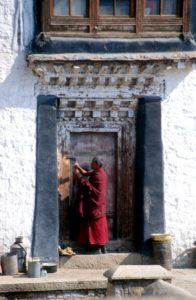 side entrance, one of the many at Sera 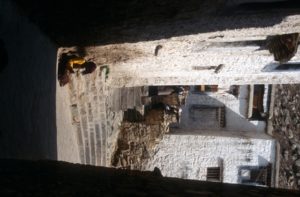 one of the small alleys at the Sera monastery 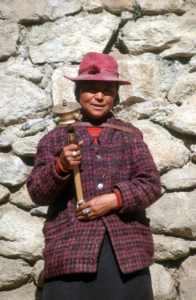 a woman at the Sera monastery 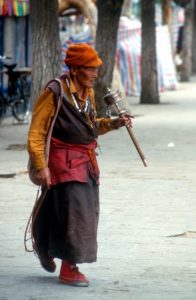 another pilgrim with prayer wheel

Another one of the ‘Great Monasteries’ is Sera, also in a beautiful setting, against the mountains outside Lhasa. The temples here are smaller, and our guide rushed us through, perhaps also because it was a Sunday. This is when the monks take a day off from the vociferous debating that the monastery is so famous for. Yet, the real attraction is the complex itself. Wandering around, through courtyards and narrow alley ways, brings surprise after surprise, ranging from beautifully carved wooden balconies to lonely plants waiting in a distant window. The complex once housed 8000 monks, but now no more than 500 are in residence, and many of the living quarters have fallen to pieces.

next: more of Lhasa 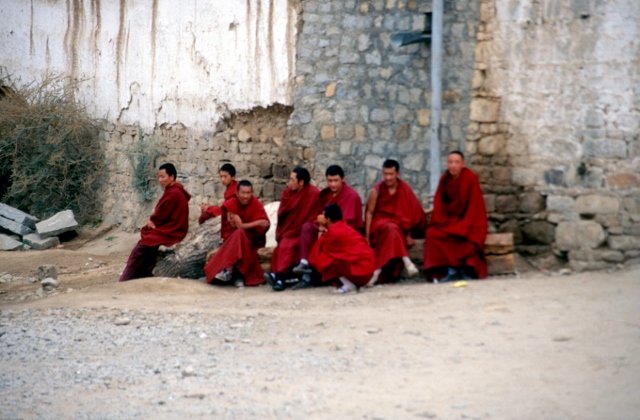 group of monks at the Drepung monastery