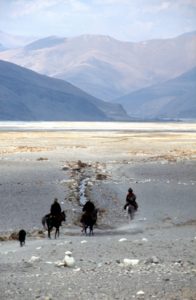 Tibetans on horseback, on the Tibetan plateau towards Nepal

The final stretch of the Friendship Highway, with more spectacular mountain scape, before dropping 1000’s of meters to the Nepal border, and to Katmandu.

The road back to the Highway, so attractive in the morning, had now lost its appeal, paling into insignificance compared to our earlier experience, and was merely long. Arriving at the highway, we finally started to appreciate the road surface, despite it being just as dusty and corrugated as the day before. Everything is relative. Longing for a hot shower after a day’s drive, we were in for another accommodation shock, the Old Tingri Guesthouse. Although ‘old’ referred to the village, the guesthouse was nevertheless a very basic affair. No electricity until eight, when the generator was switched on. Communal toilets – which turned out to be private after all, since we were the only guests that night – and no running water, just a bucket outside our room, so forget about the hot showers, again. Although we were prepared for hardship, it just arrived at the wrong moment. And it was so cold! 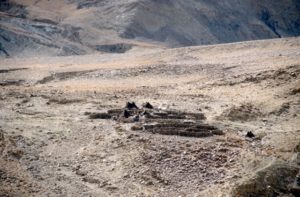 nomad tents in the middle of nowhere

The next day we left again very early, still in the dark, for the final leg to Nepal. We continued on the Friendship Highway and crossed its last high pass, Lalung La at 5050 m, just after the sun had risen high enough to illuminate some of the most fabulous landscape imaginable, with snowcapped peaks wherever one looks. The cloudy sky provided a spooky atmosphere. It had been snowing lightly the night before, and the mountain slopes and the fields beside the road were covered with a thin white veil. 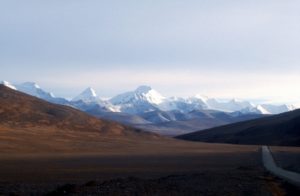 the Friendship Highway, and the view 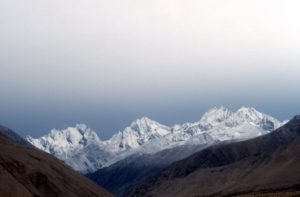 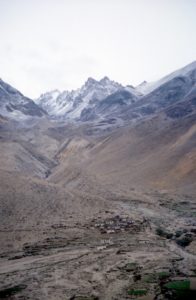 even here, a village, far from any others 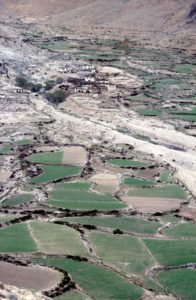 irrgation on the alluvial fans even allows some agriculture 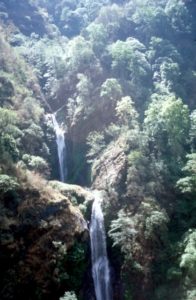 towards Nepal the road drops, and enters lush, green areas with waterfalls

After the pass we descended very rapidly, to reach Zhangmu, the Tibetan border town at 2770 m. This place is another dump, with garbage in the streets and families of pigs checking it out. It had been raining, and the mud added to the misery. No tarmac here. Yet, the village has the potential to look picturesque, perched against one side of the valley wall, with the river deep below. The scenery in the valley itself had changed during the last hour, or so, with first scrubs appearing, and later real trees, nice and green, the first real vegetation we had seen for some time. After passing customs in Zhangmu, the road descends another 1000 m within a distance of 10 kilometers, or so, to the bridge at Kodari, where we entered Nepal. Here, we were supposed to change cars, drivers and guides, a highly doubtful arrangement with lots of opportunities to go wrong, but, to our not insignificant surprise, our escort was indeed waiting for us, just across the bridge. 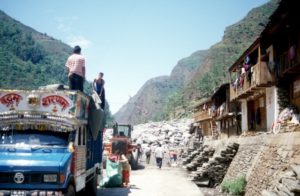 If we had expected the Friendship Highway to improve in Nepal, we were in for another disappointment. The road to Kathmandu was closed thanks to two big landslides that had come down a few days earlier. Our Nepalese escort had arranged for several cars, also in between the landslides, to take us from one to the other. But he didn’t arrange for porters, there where we had to cross the mud and boulders that blocked the road. During those 45 minutes’ walk, with all our luggage on our backs, did we regret buying all those many artifacts in the past two weeks! And had we expected the end of our misery after the last landslide, we were disappointed yet again. The last driver turned out to be a real maniac, which, however, is nothing special in Nepal, something we learned upon getting closer to Kathmandu. Every driver is, in fact, a complete maniac. Traffic is complicated by not only cars and busses, but also numerous motor bikes from the ones who try to dodge the traffic jams, and by bicycle rickshaws and three-wheeled motorized rickshaws. They tend to drive on the left side, although a short cut here and there is perfectly acceptable as long as there is no policeman around.  And all traffic only comes to an almost complete standstill if there are cows on the road, no matter whether they keep left or right.

We spent three days in Kathmandu, long enough to absorb some of the local atmosphere and to see the major sights, which concentrate around the palace squares of the city itself and it sister city, Patan, across the river. Both demonstrate an amazing architecture in temples and royal palaces, whilst the surrounding streets are the usual city centre chaos, complete with market stalls, narrow alleys, courtyards and a colourful mix of people. So close and yet so entirely different from Tibet.

elevation profile of the Friendship Highway, from Lhasa to Kathmandu: Tibet is up, Nepal is down (from http://mythsandmountains.com)