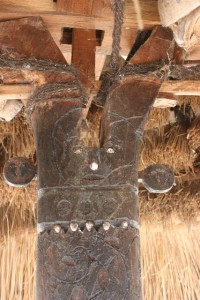 Around Bajawa, on the Indonesian island of Flores and under the watchful eye of the active volcano Gunung Inerie, are numerous traditional villages from the Ngada people, a largely animist tribe. The villages have a standard lay-out with two rows of tall-roofed houses on either side of a large central plaza, which is adorned with male and female ancestor worshiping symbols: the so-called Ngadhu, a carved totem pole with an umbrella-like thatched roof, and the Bhaga, a miniature hut on stilts – the phallus and the womb. In fact each clan in the village has a pair of Ngadhu and Bhaga. 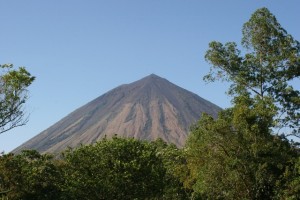 The square also has its share of altars and megaliths, representing ancestor graves. More recent deaths have also been buried here, and are decorated with a cross, as well as certain animist symbols, like plates and bottles. The graves are also used for other, more mundane needs, like coffee drying or draping of the laundry. Apparently, if a man dies in peace he gets a place in the square, otherwise he is buried outside the village – no mentioning of women, of course. I am not sure what determines the location of the grave in the square, in one of the villages one had to step on a grave to get to the counter of the local refreshments shop. 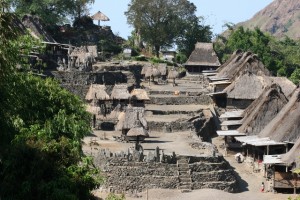 The village square in Bena 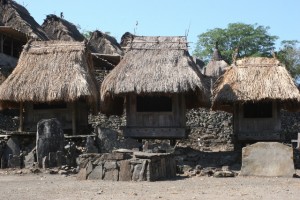 Three Bhagas lined up in Bena 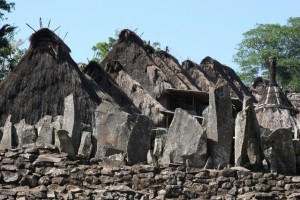 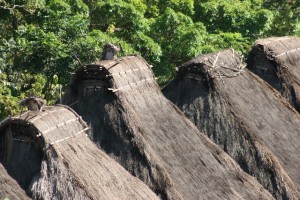 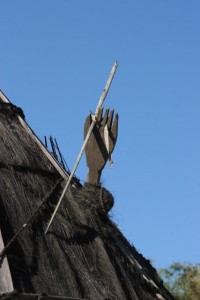 Decoration of Ngadhu roof in Langa 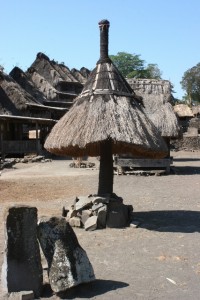 The verandahs of the houses show the number of buffalos killed by the family, from the horns, and the number of pigs, from their jaws. Nowadays, they are also used to display the traditional weavings, ikats, a major source of income. 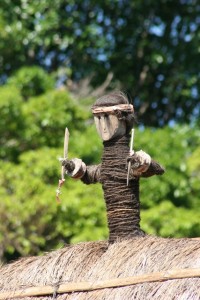 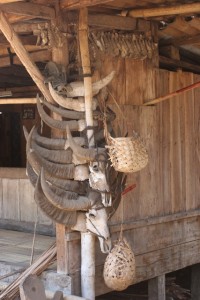 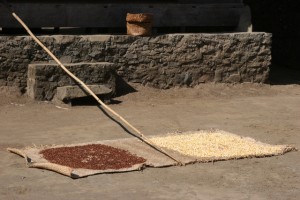 The easiest accessible village is Langa, perhaps most developed because its proximity to Bajawa. Here several of the roofs of its ‘traditional’ houses are in fact made of corrugated iron, at a considerable extra cost as the tall nature of the roofs is maintained – a clear indication that traditional ways of live are still very much taken seriously, here. The next villages, Bela, Lobu and Bena, are more authentic, with tall thatched roof houses, decorated individually with spokes and with the male and female symbols, and occasionally with solar panels – progress is unstoppable. From Bena one can walk along the slopes of Gunung Inerie to Tololelo, another village an hour further, and then down to Gurasina and back to Bena. Wogo, on the way to Ende, is a slightly more impoverished version of the earlier villages.