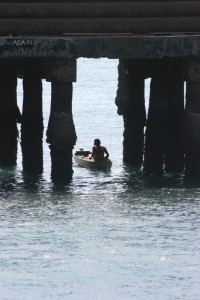 fisherman in Ende, halfway the island of Flores

In October 2006 I spent a week traveling the Island of Flores from west to east, from Labuanbaju to Larantuka, from Komodo Dragons and fishing ports to traditional villages and volcanos. A most enjoyable trip, of which here the report, in three installments and lots of photos, as well as links to further locations.

The UN system, to which my employer adheres, considers live in Banda Aceh tough, so tough that it offers its staff a week Rest & Recuperation for every eight weeks on location: who am I to complain!

The first such R&R was due during the holy month of Ramadan: but where do you go then, in Indonesia, the world’s largest Muslim country? Towards the east, far to the east, past Bali and Lombok, is the Island of Flores, a predominantly Christian island and thus likely to be a lot less affected by the sunrise-to-sunset fasting which was not my idea of a holiday. 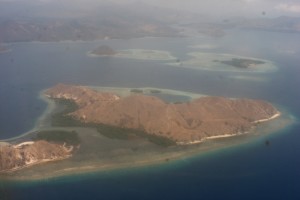 view from the plane, on the way to Flores

To get from Banda Aceh to Flores takes a day, with an overnight in Jakarta, an early morning departure to Denpassar and a connecting flight to Labuanbaju, at the western tip of the island. In the event, my flight schedule had been changed, and I had no less than three hours in Bali – in the transit lounge! Merpati Airlines, one of the very many local operators in Indonesia, had brought me to Bali on a plane packed with seats, at the cost of leg space. Why they put in so many seats is unclear, as the plane was not even half full. They also must own the last Fokker F27 on the planet, and that one took me and a handful of others to Flores, slowly. But the flight itself was entertaining, with spectacular island-scape below, pristine white beaches behind surf breaking on the reefs, turquoise blue bays, and volcano after volcano visible in the distance, surrounded by clouds. 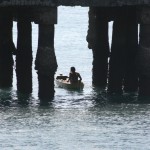 (1) From Labuanbaju, a small fishing port from which one can visit the Komodo Dragons on Rinca, to the Todo village of the Manggarai and on to Ruteng.

Labuanbaju is a very small, cute little fishing village – I think the population is a mere 7500 – with a disproportionate tourist industry, now sadly suffering because of Indonesia’s declining popularity as a tourist destination, even four years after the Bali bombs, an issue still on everybody’s lips. Sadly for Indonesia, that is; I actually appreciate a scarcity of tourist.

Labuanbaju’s fame is mostly derived from its proximity to Komodo Island, four hours by boat and home to the world’s largest lizards, the up to 3 m long prehistorically looking Komodo dragons. Another, smaller island that also has these monsters in Rinca, only two hours away and also part of the Komodo National Park, so that was what I was heading for the very next day. 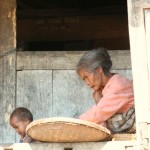 (2) From Ruteng to Bajawa, the next inland town, and the Ngada traditional villages, and then to Ende and Wolotope on the south coast

The road to Bajawa goes through similar country side, wooded hills, occasional giant bananas, and the kapok trees, weird and white fluffy material hanging from the branches, ready to be put in pillows and whatever else needs soft filling. Before Bajawa, we dropped briefly down to sea level, at Aimere, the center of Arak processing. Arak is the distillation from palm wine, a rather basic process that is carried out in everybody’s backyard, it seems, and involves a boiler, a bamboo plumbing system that gradually drops down again, and a plastic water bottle to catch the liquor at the end. I have tried it, it is revolting. Past Aimere we got back into the mountains, with splendid views over Gunung Inerie, another one of the distinct volcanoes that typifies Flores and much of Indonesia, this one 2245 m high. 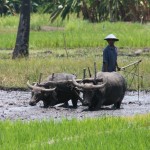 (3) From Ende land-inwards, to Moni and the Kelimutu crater lakes, and then on to the north coast beaches, and the towns of Maumere and Larantuka

The road continues inland, zigzagging through the mountains, valleys dominated by rice padis – beautiful in the late afternoon sun – to Moni. This small village is the base for Flores’ biggest tourist attraction, the three differently coloured lakes at the top of Kelimutu volcano. In fact, to facilitate the hordes, a tarmac road up the mountain reduces the four hour climb to a half-hour drive, and a 15 minute stroll across a well-laid path and on concrete stairs, to Inspiration Point, another concrete monument from where all three lakes are visible. As with all these attractions, sunrise is touted as the best time to visit, so at 4 am there is a flurry of activities in preparation of the ascent – and my hotel was such that, like it or not, you ‘ll wake up. In this case, someone had started a truck engine next to my room at 4, and helpfully blew the horn a little later, to ensure that everyone knew about it. In reality, it is probably best to get up much later, and avoid the chill at the top, and the wait until the sun is really high up, which is when the lakes start taking their distinct colours of turquoise, black and brown. And the best place to see the lakes is in fact at the crater rim, where there is a promontory that allows you to sit in between two of the lakes, with a fantastic view – but not for the faint hearted, or those suffering from vertigo, as the crater walls plunge vertically down to lake level, perhaps 100-200 meters below.