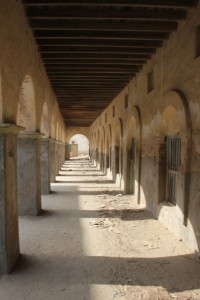 Gallery of a colonial building, Berbera

Run-down, but charming port city with a wonderful atmosphere, despite dusty streets and shot-up colonial buildings.

There is really no pressing reason to go to Berbera, other than that there is nothing else to do in Somaliland (except visiting the Las Geel caves, on the way to Berbera). The country side on the 170 km drive from Hargeisa doesn’t change much, although there are less and less animals, only camels and goats, grazing in between the shrubs. We circumvent the occasional mountains, still with very little vegetation. And Berbera itself, well, the entry is perhaps even more depressing than the one into Hargeisa. And yet, yet… there is something magic about the town, in all its run-down, dusty form. 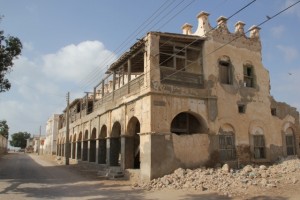 One of the many war-affected colonial buildings in Berbera

The old town, with lots of old British colonial buildings, many apparently shot to pieces in the war with Somalia in 1988, at first seems mostly bolted up, a sort of a ghost town, but on closer inspection there are actually quite a lot of people living here, quite a lot of minimalist café terraces, and – I have no idea where they came from – quite a lot of school children who surrounded us within minutes of us getting out of the car. I suppose we are a rarity, here, not many tourists make it all the way to Berbera. 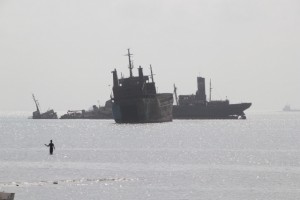 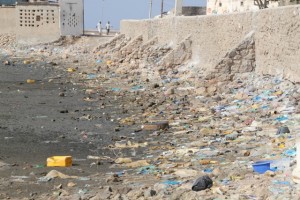 low tide in the fishing port 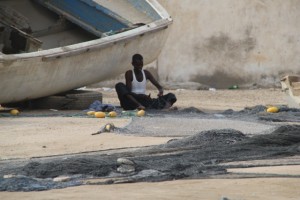 Berbera is on the coast, but somehow the coastal strip is empty; apparently, nobody wants to live near the water front, too hot, too humid. Yet, the main business is fishing, the town supports many fishing companies, and has a small fishing jetty – you cannot call this a harbor – where some men are mending nets. It also has a few restaurants, where we had excellent grilled fish. Of course, outside town is the real harbor, much bigger, and the international airport, with the – apparently – second largest airstrip of Africa. Built by the Americans in the time Somalia still mattered as a pawn in the Cold War. 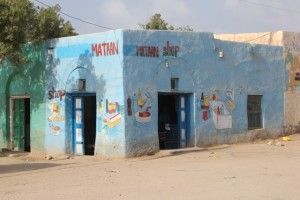 a local shop in Berbera 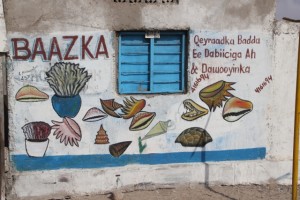 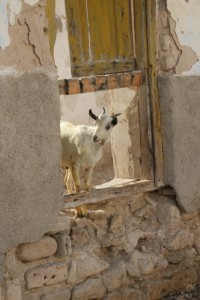 A goat is the only inhabitant of some of the shot-up buildings, Berbera 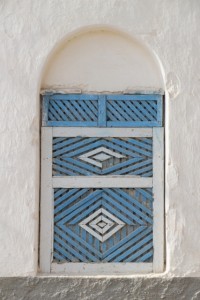 Wooden window, one of many in Berbera 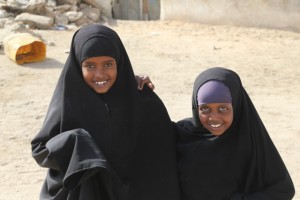 Our driver, who is from Berbera, doesn’t understand why we are so interested in the old town, and wants to show us the new town. So we oblige, only to realize that we cannot actually distinguish between the two. Same dirt roads, same dust, same run-down houses, only difference is that the buildings are single story, as opposed to – collapsed – two story buildings in the old town. After an hour or so we have seen all there is to see, and we resume the return trip to Hargeisa, another three hours of desolate country side. 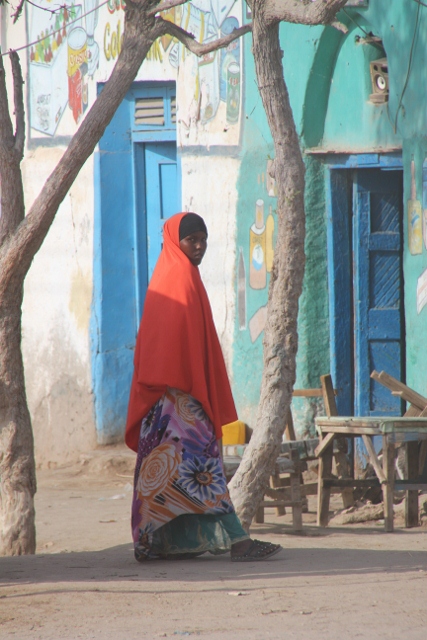