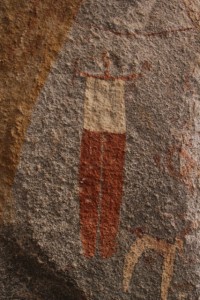 All the adventurous, hardship travel to Somaliland has one major objective: visiting the rock art galleries of Las Geel, some 50 km outside Hargeisa.

There is something special in seeing rock paintings. Knowing that you can only see this here, in situ, you cannot transport them to any museum around the world; the magic and the mystery of the nameless makers, long-dead shamans who painted this possibly thousands of years ago, likely in some ritual to entice the gods to bless the hunt, or the harvest; and sitting there looking out over the plains below, like others must have done, too, that same thousands of years ago.

Getting to Las Geel involves hiring a car and a driver in Hargeisa, and an armed escort – whether this is for protection, or to provide an additional financial stimulant to the economy, I don’t know. As customary in Somaliland, we first needed to fuel, then put some more pressure on the tires – you could not possibly have anticipated that ahead of the departure, of course. Driving is a bit of a challenge: despite having been British, they drive on the right… but somehow, most cars have their steering wheel on the right, as well! I haven’t worked out why, other than that cars with the wheel on the right seem to be cheaper (?). 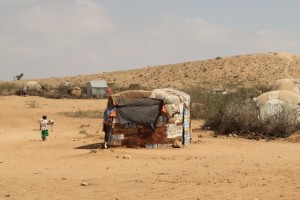 outskirts of the village near Las Geel 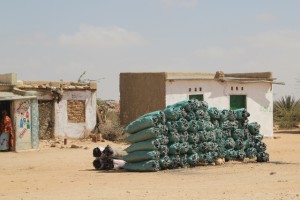 outside Las Geel, not much other business than charcoal

Our driver spent the first hour and a half mostly on his mobile telephone, except at the police check points, where he knew all the right people, and managed to get us through without once showing our special permit – another financial stimulant – or passport. Closer to the site, we turned onto a dirt track, which we followed for some 20 minutes, until we reach one more police check point. Surreal, this, absolutely in the middle of nowhere, a metal bar across a dirt road, and a police man who was not going to interrupt his conversation on his own mobile phone to let the one car he would see today through. So we waited five minutes – anyhow, our driver was also on the phone -, and then finally common sense was regained, permit inspected and one copy confiscated, and we could proceed. Another 10 minutes further we arrived at a small site building, where we woke up the care taker, who turned out also to be the guide. And who immediately got onto his mobile phone, too, and kept on talking well after we had reached the first few shelters. What is it with these people and mobile phones? 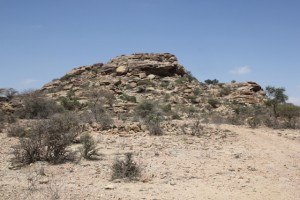 The Las Geel site has been “discovered” in 2003, as a pristine site, unaffected by human destruction in the form of graffiti, and unaffected since, because, well, the site is in Somaliland. Like in Zimbabwe, the caves are in weathered granite hills, something we had noticed already on the way, a change in landscape allowing the occasional granite hill to stick out of the otherwise flat desert-like surface. There are over 20 shelters, of different size and depth, of which mostly the roofs have been painted, predominantly in red and white, with occasional brown-yellow, and, very rarely, black pigments used, too. The subject matter is cows, and humans, and cows, more cows, and some more humans, and a few dogs. I also found one giraffe, and one gazelle, but obviously, this was a site inhabited by pastoral people, not hunters – which suggests that it is probably not very old. Carbon datings suggest life in the cave took place almost 5000 years ago. 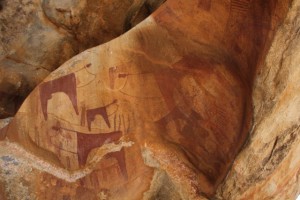 a collection paintings inside a shelter 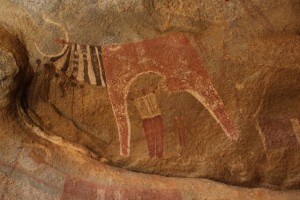 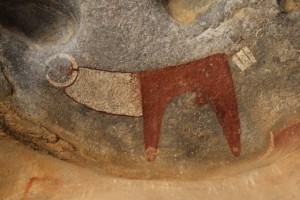 We explored the various caves for well over an hour. Wonderful experience, warmly recommended (if not in Somaliland, then somewhere else, perhaps more accessible, but go and see rock paintings one day, it is well worth it).

next: to the port city of Berbera 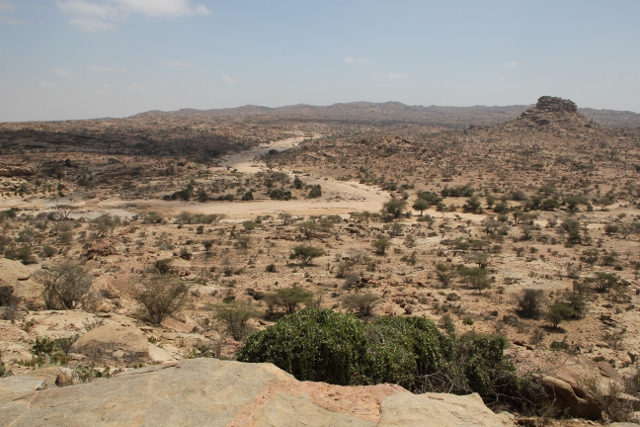 The view from the Las Geel caves, across the dry wadis

For the real enthusiasts, a few more pictures of the paintings. 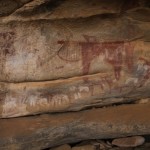 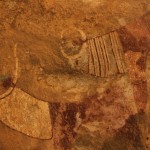 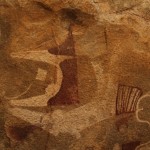 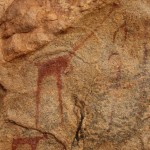 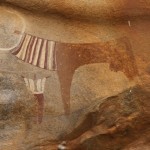 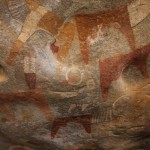 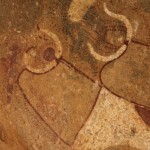 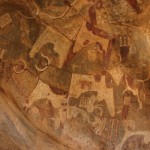