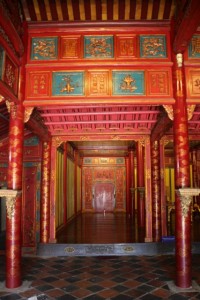 Inside one of the restored palaces of the Forbidden City

Vietnam’s Imperial City, with palaces and mausoleums varying from the well-maintained to the sadly run-down.

Hue is Vietnam’s imperial city, but in fact it has been so only for the last 200 years. Somewhere early 19th century the capital was moved from Hanoi to Hue, in recognition of the fact that the country was now “united”. 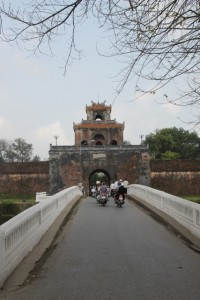 Entrance to the citadel

On the north bank of the Perfume River – no reference to its smell – is the city’s citadel, which contains the Forbidden City and the Imperial Palace. Unfortunately, notwithstanding the fairly attractive restoration of some of the buildings and pavilions in the center, much of this complex has fallen in disrepair, and the whole thing looks a bit shoddy. Yet, by wandering around, away from the main palaces – and away from the tour groups –, crossing small bridges over narrow moats, one can still get a feeling of authenticity among weed-filled ponds and gates with faded decorations. 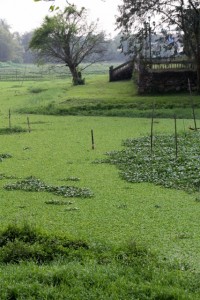 Weed-filled ponds outside the palace in the citadel 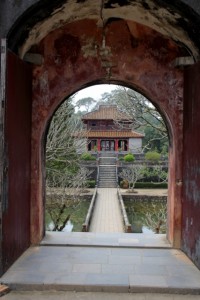 Outside Hue there are several royal mausoleums, and here it is very much the same story. Some of these places are really nice, well maintained, and surprisingly attractive; there is Tu Duc’s, with a lovely pavilion on a small pond, and old, wooden temples, as well as the emperor’s tomb, amid well-kept gardens. Other mausoleums have been allowed to crumble, buildings in a state of disrepair and the site unprotected – which, of course, makes them great to explore, unhindered by these bus loads. 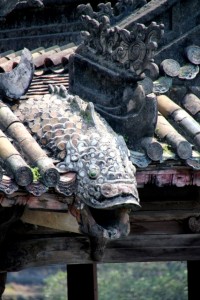 Roof decoration of a pavilion in Tu Doc’s mausoleum 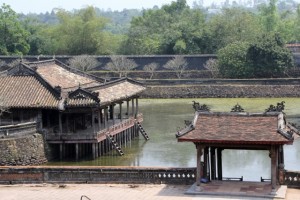 One of the pavilions of Tu Duc’s mausoleum 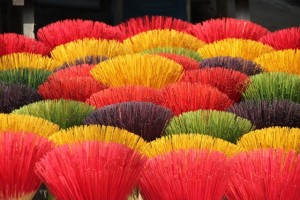 Incense sticks being sold outside one of the Royal Mausoleums Details