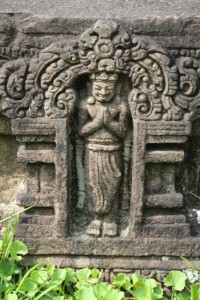 Decoration of lintels scattered around the complex

Small Champa temple complex, rather run-down but with a special atmosphere.

This is the former capital of the Champa empire, one of those obscure, hardly known polities that existed in this area in centuries past. The Champa heydays were somewhere around the 7th to 14th century, coinciding, and furiously competing, with the Khmer empire in Cambodia. There is little left of the Champa, apart from a few small communities, and a smattering of ruins, of which My Son is the most important. 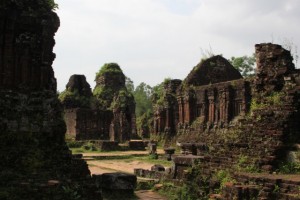 My Son is no Angkor Wat, not in terms of size neither in terms of architectural and artistic quality. We are merely talking about a couple of towers and tombs here, all of which would fit easily in one of the Angkor temples. Besides, much of it was badly shot up in the second Indochina war, and it looks unlikely to me that it will ever be restored again to its former glory. Yet, the site has a special quality, different from what we have seen so far. And as long as there are no large tour groups, you can have a bit of that Indiana Jones-feeling here. 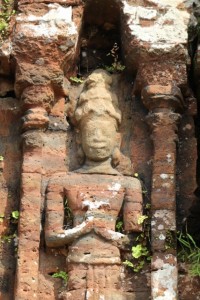 One of the better-preserved bas-reliefs. 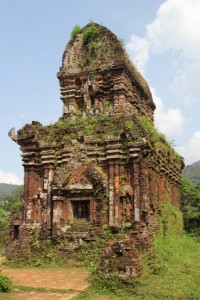