Berestagi and the Karo villages 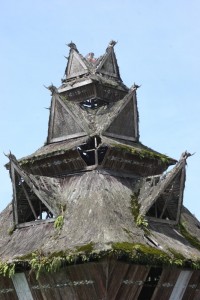 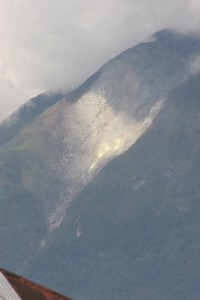 sulphur patches on the slope of Gunung Sinabung

Berestagi is very much a local tourist town, catering for the crowds of Medan, just two hours away, and also, apparently, for people further away, those who have their holiday homes in the pleasantly cool mountains; the town sports many large apartment-compounds. The attractions, apart from the cool air – much cooler than in hot and steaming Medan -, are the volcanoes here, which can be climbed relatively easily, without equipment. Gunung Sibayek, which does not really look like a volcano, but smokes nevertheless, is to the north of town and has large patches of yellow sulphur on its side. Gunung Sinabung to the SW of town, is a real, cone-shaped volcano which seems much more quiet, and is the harder one to climb. 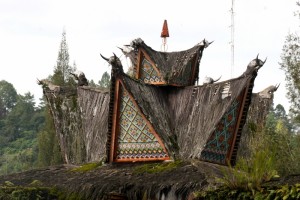 the municipality building is pretty recent, but still in traditional style gable of a modern municipality building 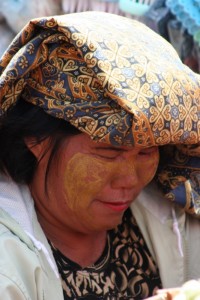 The other point of interest, and as far as I am concerned, the main point, is the architecture of the Karo Bataks. Thankfully, in Berestagi itself are still some examples present, also in the form of newer buildings that maintain a taditional architecture. Many of the villages around town still have the real old wooden houses, called Rumah Adats – traditional houses catering for 6 to 20 families (there is obviously some resemblance with the long houses in Kalimantan). Unfortunately, many have abandoned the preservation and pulled down most of them, or let them rot away. It obviously takes too much to maintain, and less and less younger people are interested in sharing their family home with several other families, without much privacy at all. 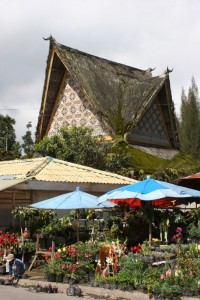 the entrance to the market, too, a traditional style building 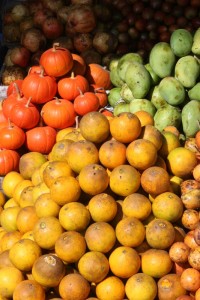 colourful, as always in Indonesia

South of Berestagi there are the villages of Gurusinga and Lingggatulu, mostly run-down, located in between extensive clementine plantations. A little further is Lingga, with many more houses, on stilts, thatched roofs, intricate gable triangles, and much better kept – in fact the most famous of the Karo Batak villages here. Another group of villages, SE of Berestagi, are Barusjahe, Balanjahe and Desa Serdang, the latter only reachable on foot, as the bridge connecting the village with the outside world had collapsed. Little of interest in terms of houses here, but watching village life is as interesting, and certainly more colourful. Only disturbing issue is that in some villages a bule – foreigner – is still clearly a novelty, encouraging children to go and follow you en-masse – a true pain in the neck! Perhaps there is a benefit in going to touristic villages after all, where people are much more used to foreigners. In Lingga one is expected to provide a voluntary donation – and kids, uniquely in the region, ask for pens, bonbons and dollars! -, but the state of the houses is much better than elsewhere, many have been repaired, suggesting that the donation is indeed used for what it is meant for. 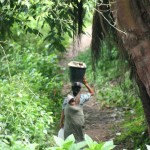 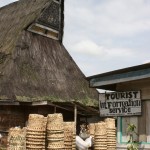 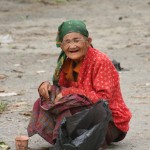 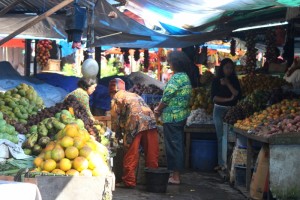 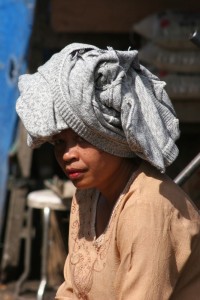 an another market woman

In fact, the nicest building happened to be just outside Berestagi, completely unexpected, not mentioned in any tourist guide, with a three story roof – admittedly, it won’t be there long anymore, on the verge of collapse. But there is hope in the form of new construction: many of the government buildings have adopted the decorative gables, which feature prominent on new offices. And churches too, use traditional structures, which easily combine with a cross to top the bell towers.

There is not much else to do in Berestagi, except for Gunduling Hill which provides for a nice view over town, and over the volcanoes, and also serves as picnic place in the weekend, every inch of the local park covered with mats, rented out by the local entrepreneurs. And as in every Indonesian town, the local markets are an attraction, the main one with plants, as well as the vegetable and fish market further down Mainstreet.