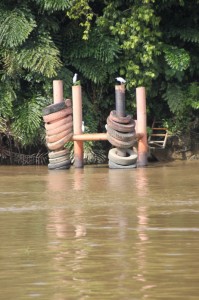 Major Bornean highway offers a view of the industrial activities, as well as river-side villages and wildlife, away from the buzz. Take the virtual tour!

For the connoisseurs, the Mahakam River is one of those legendary rivers that took a lot of effort and courage to reconnoiter in the 19th Century. Perhaps not of Congo or Nile stature, but still sufficiently challenging to entice explorers into the adventure. The problem with the Mahakam, at the time – we talk second half of the 19th Century and the beginning of the 20th – was twofold: the mouth and the area immediately inland was controlled by the Sultan of Kutai, a rather treacherous individual with his own agenda (not unusual for the time), and wherever the Sultan did not control the area, further upstream, the Dayaks roamed around, primitive tribes feared for their cannibalism. 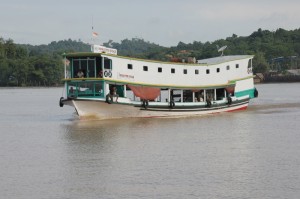 Nowadays traveling the river is less dangerous. Samarinda, the seat of the Sultan, has been incorporated into present-day Indonesia, and so have the Dayaks. There are tour operators, of course, and one can use comfortable house boats to visit the more accessible parts of the river. To some of the places – but not all – you can even get by car, and some of the numerous mines along the river are serviced by private planes of the bigger mining companies. But the real thing is to use public transport, which comes in the form of what is called the kapal biasa, a river ferry that runs as far as the water level allows it to run, and stops at the main population centers (and in the middle of the river, if necessary). For shorter excursions away from the main river you can then hire a ces locally, a wooden canoe with outboard engine. Plenty of villages along the way, for accommodation and food. The one key requirement is that you travel light. 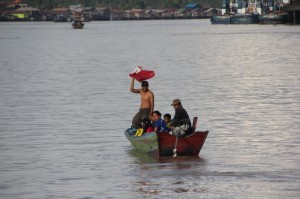 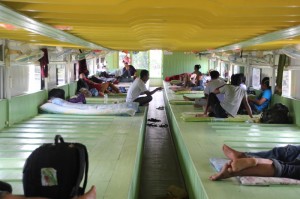 the upper deck sleeping quarters of the kapal biasa 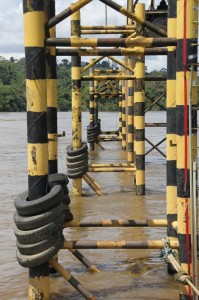 If you think a trip on the Mahakam is going to take you through 900 km of pristine jungle, think again. The Mahakam has been a source of minerals, coal and hardwood for as long as people can remember. And it shows: all along the river, but especially the downstream part, huge conveyor belts transport coal to metal jetties where barges are being loaded almost continuously, the full ones being towed away to be replaced by another empty hull. All those barges travel up and down the river, too, controlled by one or more tow boats. Business seems insatiable: plenty of barges and tow boats are being built in the multiple shipyards of Samarinda and Tenggarong, along the lower ranges of the Mahakam. 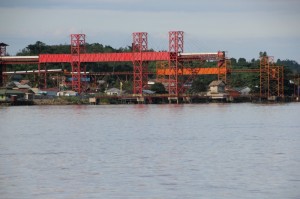 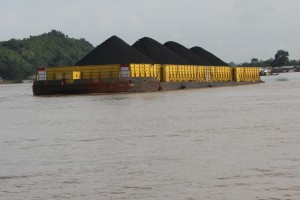 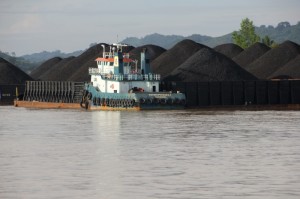 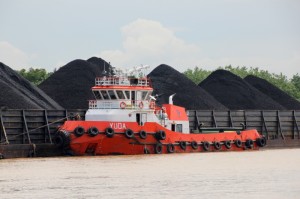 tow boat next to a coal barge 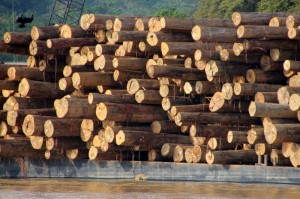 Logging is big business, too. Swarms of logs, tied together as rafts, float down the river; lots of them are being processed, too, in the many sawmills downstream. The scars of the logging operations are visible on the banks further up. There is some form of control, a service that checks the sustainability of the logging process and of the firms operating here – we met some of the controllers on the way -, but how effective they are remains an open question.

Especially in the lower reaches, dredging is another important economic activity. Tens, if not hundreds, of small dredging platforms suck sand from the bottom of the river, heave it over in a little barge, and no doubt sell the product onshore to builders and others. Hard work! 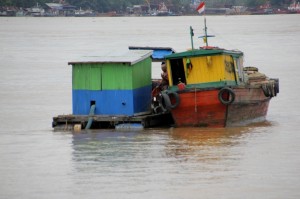 and another platform and barge 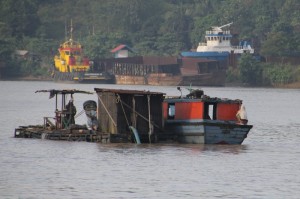 All of this doesn’t mean that the Lower Mahakam River is unattractive. On the contrary, but it is not that pristine jungle, not the prolific birdlife one may have expected. There is lots of activity and lots of traffic on the river, here a really wide stream, and along the river banks industries alternating with villages on stilts, and the occasional patch of green. And the further one reaches upstream, the less developed the banks are, and the less populated. 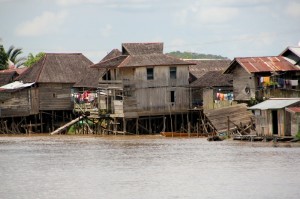 some of the houses still have traditional architecture 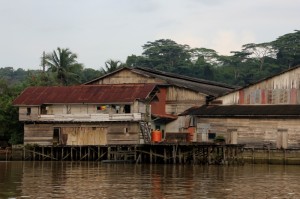 houses on stilts along the river 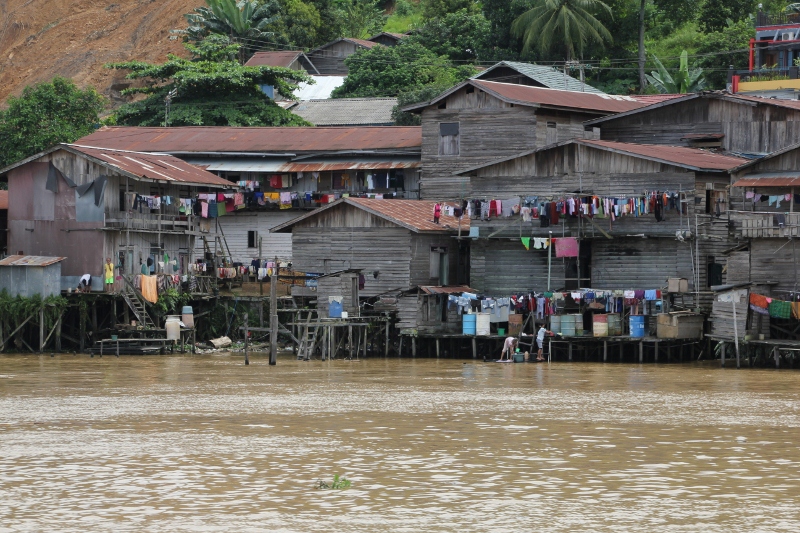 Past Tenggarong, the second big town on the river, mostly noticeable for its busy traffic, and past the next big settlement, Kota Bargun – the place of a spectacular new bridge over the river, including a road through the low lying swamp supported by pillars, which disappears into the distance, seemingly leading to nowhere – one reaches the Middle Mahakam. Here settlements become rarer, and individual villages are now far and few between. Getting onshore, getting off the boat, off the kapal biasa, allows time to explore these villages, as well as the narrower tributaries and the lakes behind the main river. This is where the jungle reigns, once again, this is where the birdlife returns, monkeys populate the trees. And this is also the area of the Dayak villages, with spectacular longhouses decorated by wooden sculptures (patongs, or hampatongs).

The virtual tour: Below I have covered the Middle Mahakam River from Muara Muntai to Long Bagum, in fourteen individual entries. Each entry has its own bit of descriptive text, and some pictures, to provide you with a glimpse of what it means to travel the Mahakam River. (At the end of each entry a link takes you to the next, should you want to complete the whole virtual tour of the river.) 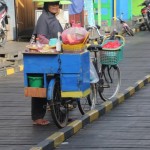 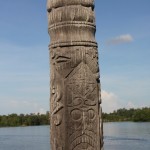 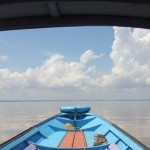 The first typical Mahakam settlement is Muara Muntai, a boardwalk village on stilts, to raise it above the frequently flooding river plains. From here, small motorized canoes can take you to the nearby lake, Danau Jempang, a vast expanse of shallow water full of fish and with rich bird life. On the other side of the lake is Tanjung Isuy, a somewhat run-down village with a Dayak longhouse transformed into tourist accommodation and a great collection of wooden statues throughout the whole village. 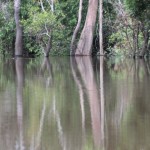 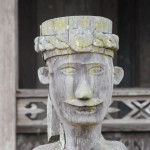 The Ohong River, or Sungai Ohong, is a small stream that empties into the lake. Traveling this narrow tributary is probably one of the most attractive trips one can make on the Middle Mahakam, on account of its rich wildlife. And the traveler is further rewarded by Mancong, another Dayak village upstream the Ohong, with another longhouse. 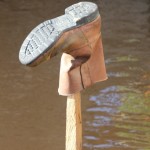 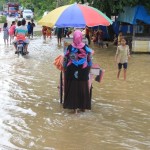 Back to the main Mahakam River the next village is Muara Pahu, essentially one long boardwalk and one street on tierra firma, with houses on stilts all along. Further upstream is Melak, a somewhat larger town with a lot of mining activity nearby, and with a road connection to towns like Samarinda. 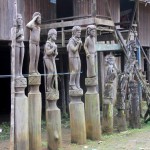 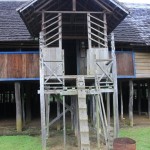 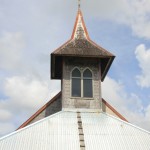 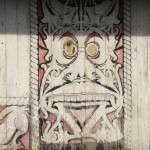 The road network here also allows for excursions away from the river, for instance to the villages of Benung and Eheng, both with original Dayak longhouses. Barong Tongkok is a rather nondescript town, also away from the river, but worth mentioning because of its unique wooden sculptures of two missionaries. The next river town, still connected by road to Melak and the Dayak villages, is Tering, consisting of settlements on both sides of the river. 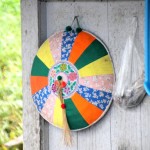 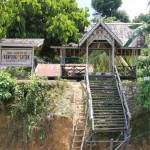 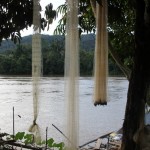 Close to Tering is Long Iram, where we didn’t stop, but from where one can get transport further upriver, to Datah Bilang and to Long Hubung, two more Dayak villages with more traditional architecture, before reaching Long Bagum, which is as far as we got (and also as far as the kepal biasa goes, by sufficiently high water levels)

With more time, and under favourable circumstances – like enough water in the river to clear the rapids, but not too much water, which makes the current too fast and dangerous -, one can continue further upstream, all the way to Long Apari. The kapal biasa doesn’t cover this stretch anymore, so you’ll need to find other means of transport. I am sure a ces can be rented to go upriver, step by step. We were offered a seat in a speedboat, for a cool one million rupiahs each (approx US$ 100), which would go all the way to Long Apari in one day, and the boat driver promised lots of excitement in the rapids. We declined the offer, with bleeding heart. There is only so much river we can handle, and honesty demands to admit that after several days, the Mahakam becomes a little monotonous. But it remains a formidable river, and traveling it is a great adventure – recommended for up to a week!