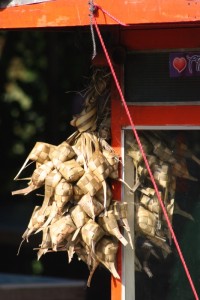 sticky rice parcels on a food stall in Medan

Large and unattractive city with a small-town atmosphere in its low-rise centre, for however long that may still be preserved

Medan is mostly large and unattractive, never mind that it offers some of the comfort and facilities that Banda Aceh, where I was based at the time, lacks: restaurants, super markets, cinemas etc. Touristically, Medan is more a base from where to travel to Bukit Lawang or to Berestagi, or even further, to Lake Toba, but the city has a few attractions in its own right. 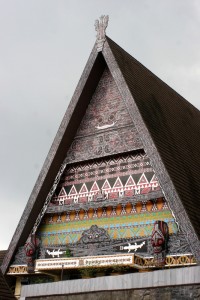 the triangle gable roof of the Medan Museum 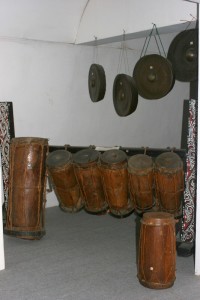 collection traditional drums inside the museum

The local museum has an interesting collection of Sumatran anthropological pieces, including a fabulous set of drums, but most of it is only half lit, and there is very little English explanation. The city’s mosque, Mesjid Raya, is a mosque like so many other mosques, and the variously called Medan castle or Medan palace, officially known as Maimoon Palace, which is the old sultan’s residence, is in fact a rather large house, no doubt attractive at its time but now pretty run-down. 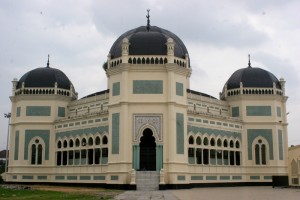 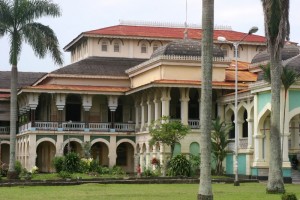 the Maimoon Palace, locally known as the Medan Palace, the residence of the old royals 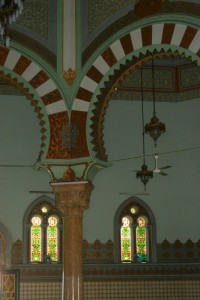 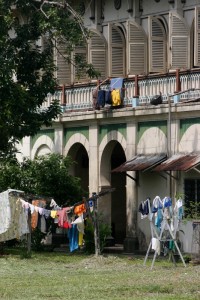 part of the palace is still being used, I am not sure by whom 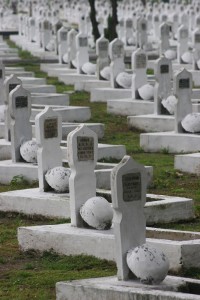 every soldier with his helmet 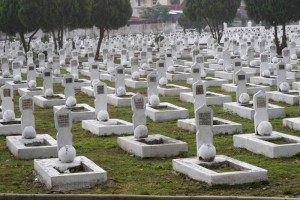 One of the more interesting places is the military cemetery, the ‘hero’s grounds’ – if you have been in the army you automatically become a hero; whether you died in battle or of old age, you still get buried here. Rows and rows of simple crosses, with white painted helmets in front, many dating from the time of independence. 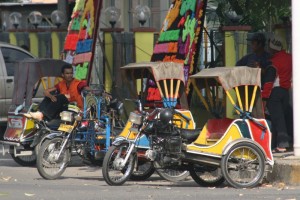 becaks, the taxis of Medan 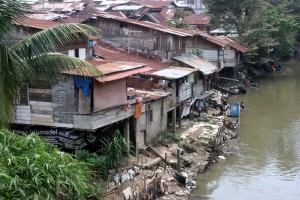 not all of Medan is big-city-like, here houses along the river 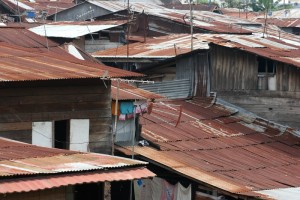 Although the city still has a provincial feel over it, with the airport almost inside, and very little high-rise, shopping malls are taking over. Most of those seem to be attracting window shoppers only, and very few buyers; perhaps economically Indonesia isn’t ready yet for the malls, but to compensate this, all malls have a large food court, usually at the top floor, and sometimes accompanied by an ice rink, also on the top floor! Why you wouldn’t put this in the basement instead, beats me, but never mind. 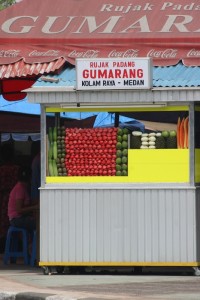 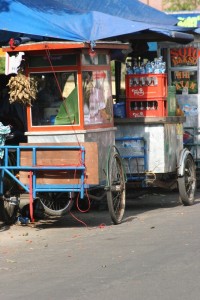 Traffic is becoming the chaos one expects from a large Asian city, albeit still dominated by rickshaws and becaks, as well as the usual army of motorbikes. Yet, the center of Medan is in fact very small, somehow stimulating becak drivers to try to drive around it several times, creating the impression of large distances, and the expectation of a higher fee. Which, from the perspective of a European, is still an incredibly small amount of money, of course.