Medan Berestagi and the Karo villages 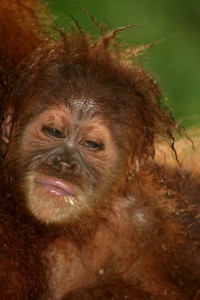 A visit to the Orang Utan reintegration program is really entertaining, bringing you real close to these fabulous creatures

Bulit Lawang’s claim to fame is the Orang Utan reintegration program, which used to prepare apes rescued from captivity – mostly from domestic use – for the wild again. However, the program now has lost its funding, and in order to generate money has turned to tourism. 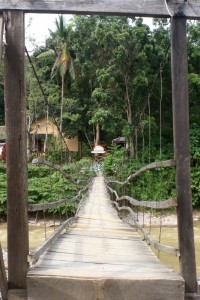 the entrance to the Eco Lodge in Bukit Lawang

A visit to the Orang Utan reserve is a delight. First day I did not get further than the ranger’s house, where we took shelter from the rain – and so did the apes, four large adults and two youngs, clinching desperately to their mothers. All enjoyed the cabbage, carrots, pineapple and whatever the rangers had brought, and the small ones got extra milk and vitamins. Having these animals right next to you is quite an experience, they look at you as if they, somehow, recognize that you are somewhat familiar. And their features are familiar to you, no doubt, delicate hands and feet, clear faces. Worth the soaking I got, as just when I crossed the stream in the dug out canoe it started pouring down – glad I didn’t go all the way up to the feeding platform, what I did the next day in dry weather: a steep climb no doubt very slippery in heavy rain. 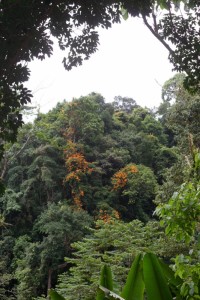 view of the jungle, home to the Orang Utans 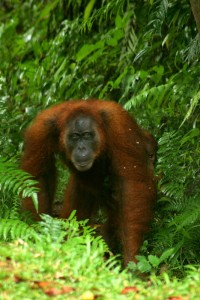 large Orang Utan coming out of the jungle 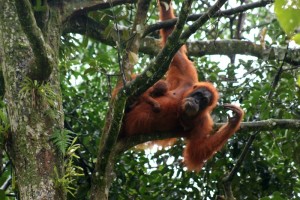 Orang Utan with young in the trees 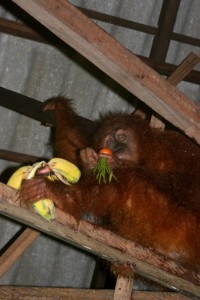 Orang Utan in the ranger’s hut 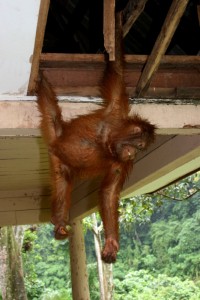 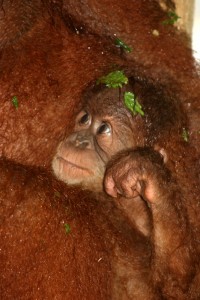 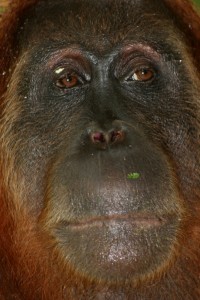 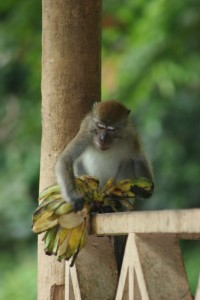 there are also other monkeys, attracted by the bananas 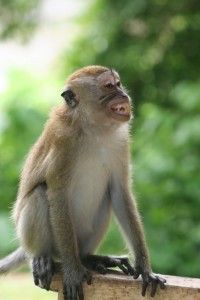 this is a pig-tailed, or long-tailed, macaque 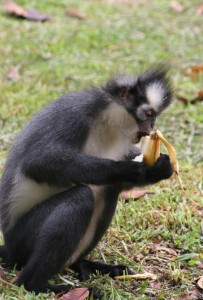 and another banana lover 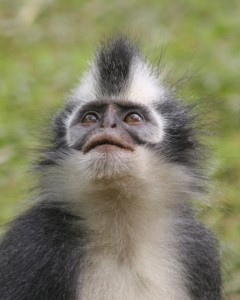 Nearby bat cave was not nearly so exciting, also because contrary to expectations there were no bats in this cave, but the short hike through plantations and jungle was nice enough, and so was the scrambling into the cave. Just as wet as earlier during the day, but this time from transpiration, not the rain.