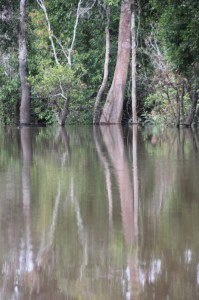 trees along the Ohong River, roots under water

One of the more scenic Dayak villages, Mancong, is reached by way of Sungai Ohong – the Ohong River – , a tributary of the Mahakam River that in fact empties in the Danau Jempang. Following this stream, in between overhanging trees, is one of the most attractive trips one can make in the Mahakam area. 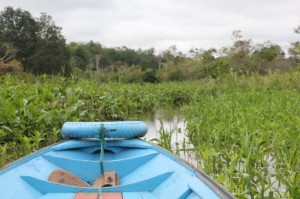 It starts with a short ride from Tanjung Isuy to the village of Muara Ohong, at the mouth of the Ohong River. The motorized canoe or ces – much bigger vessels won’t get far on this trip – finds its way through a narrow channel, full of weeds, which turns out to be the beginning of the Ohong. Initially, the banks are covered with low trees and reeds, but soon, the trees grow taller, the river narrower, and one is cruising through what feels like a tunnel, the trees overhead closing in. When we did this trip, the river level was very high, and many trees were standing in the water. 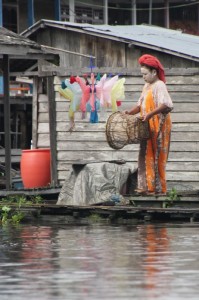 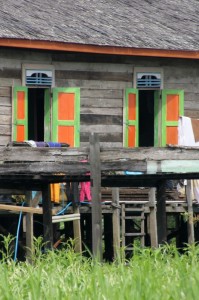 house in Muara Ohong, at the entrance to the Ohong River 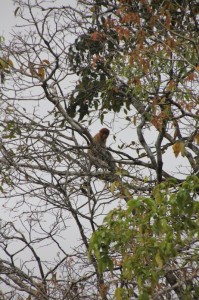 proboscis monkey in a tree 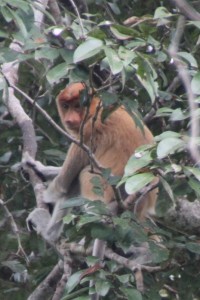 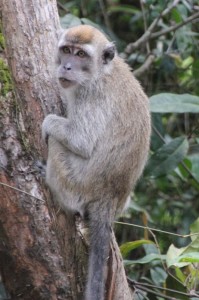 This is monkey territory. Groups of red proboscis monkeys, with their characteristic big noses, alternate with good old black macaques. Initially difficult to spot, we soon learn to pay attention to the moving tree branches: moving from a bunch of monkeys landing on top of them in search of food. 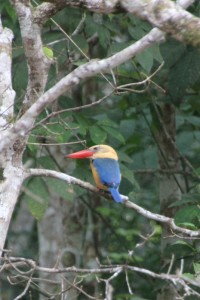 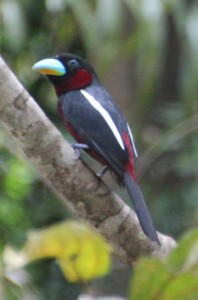 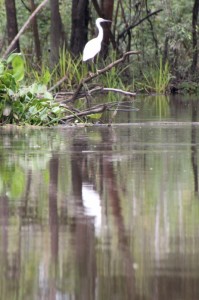 white heron along the stream; there are many of them

Elsewhere, brilliantly painted blue and yellow kingfishers and other beautifully coloured birds – one blue and white with a red chest and a light blue beak – cross the stream, disturbed by our presence, perhaps. High above a hornbill, and several other large birds which we don’t recognize, fly along the top of the forest, out of reach of our cameras. This is wildlife spotting as it is supposed to be, deep in the Bornean jungle, far from what we know as civilization. 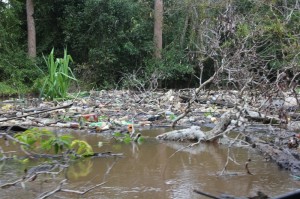 rubbish collecting in a bend of the river 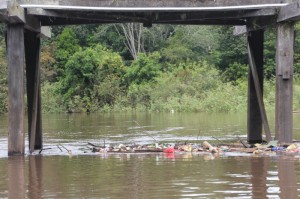 rubbish collecting under a small bridge

Except that in every bend, and at every whirlpool, rubbish has collected, plastic bottles, paper boxes, bags, anything really. At some of the villages we pass, the water under the small bridges is clogged with rubbish, mixed with forest debris. It transpires that what we call civilization has in fact arrived: and everybody just dumps whatever they don’t need anymore in the water; the water will take care of it, no? Which it doesn’t of course, but that doesn’t seem to bother people. They seem to be quite at ease with living in between their own waste. Never mind that they wash their clothes, and themselves, in the same water that contains the rubbish, as well as their excrements, of course; one of the advantages of a house on stilts is that the sewerage is taken care of.

Even this jungle is not so remote anymore.

Along the Sungai Ohong is the Dayak village Mancong, next stop. 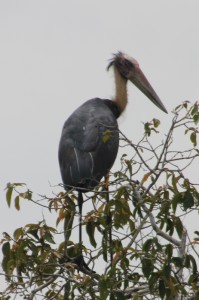 an ugly big bird, name also unknown to me