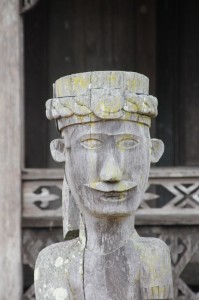 I would say the mustache of a real colonial office bearer, but apparently, or so I was told, the Dayaks themselves also grow such mustaches – Mancong

Dayak village away from the main river, with a great longhouse and a huge collection of patongs 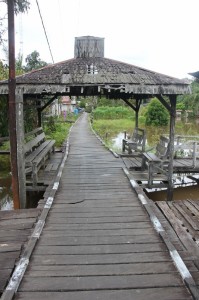 board walk entrance to the village

A few hours upstream on the Sungai Ohong is Mancong, a Dayak village situated on both banks of the river. Because of the high water, and the rubbish that has accumulated, the ces with which we arrive cannot get further than the first bridge, and we need to walk the last five minutes into the village, over the now-familiar board walks. Outside the board walks, the water has inundated much of the village, including the local volleyball pitch. 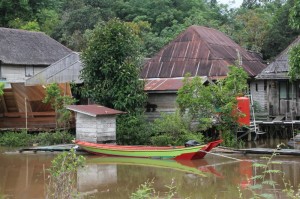 much of the rest of the village is also under water 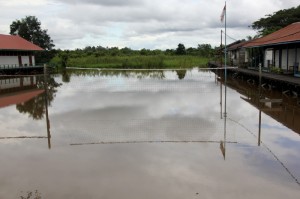 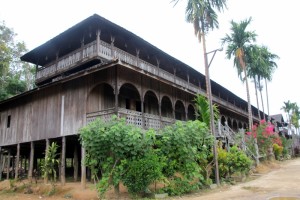 the two-story longhouse of Mancong

Mancong is famous for its longhouse, a two-story affair, which has been restored some time ago, but is now falling into disrepair again. Here, people aren’t living in the long house anymore, increasing welfare allows families to have their own house, away from the communal building, and other forces, like erosion of tribal values and increasing individualism, also work against the traditional way of living. Despite this, the building is still impressive, truly ‘long’. At several places are carved poles serving as stairs to the first level, where a covered veranda runs along the whole longhouse. Inside is a common hall, also the entire length of the building, behind which are the individual rooms, with stairs to a second level. The stairs are blocked, which is probably for the better, because the floor boards of the second level have started to collapse in various corners: I wouldn’t want to find myself crashing through it. On the other side of the building are further rooms, probably once used as store rooms, bathrooms and toilets. 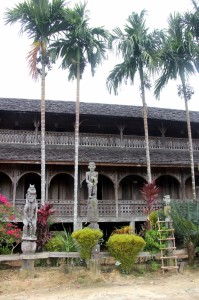 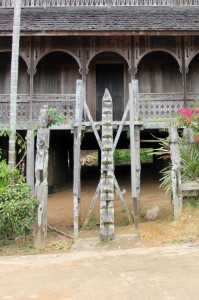 the “stairs” – a carved pole – to the first level 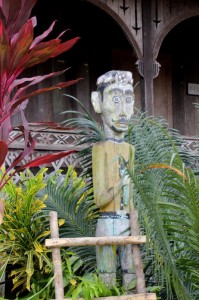 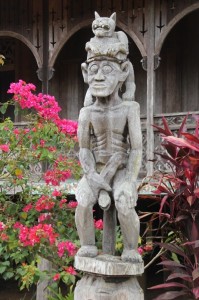 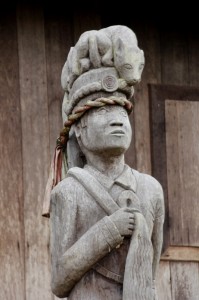 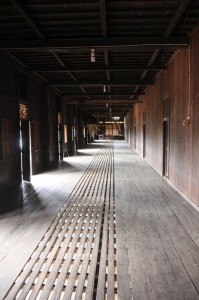 the common hall, inside the longhouse

In front of the longhouse are the patongs, of hampatongs, the wooden sculptures of people and spirits that define Dayak culture. Some are phantasy figures, but other have recognizable features, a hat, a moustache, a knife, clearly modeled on a once existing person. A great collection, which wouldn’t be out of place in any anthropological museum. And which is even more impressive in its original environment.

From here, we continue to Muara Pahu, back along the main river. 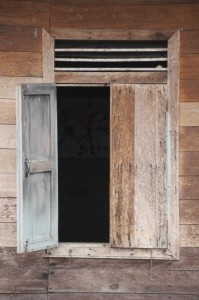 a window in the village 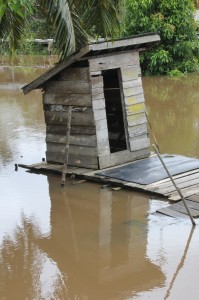 each house seems to have its own, outside, toilet