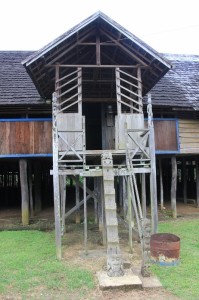 entry to the longhouse in Eheng

Another longhouse village, and some reflections on the merits of longhouses

Close to Benung is Eheng, another Dayak village with a working longhouse, ie a longhouse still being used by several families who have their own space in the building, alongside the large communal hall. 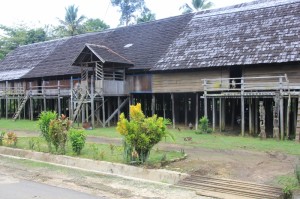 same thing, from another angle 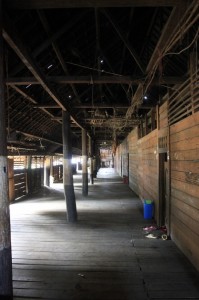 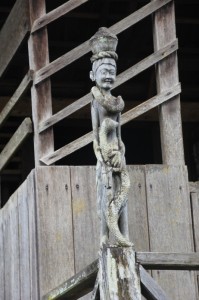 small patong at the entrance

Having seen a few longhouses now, they are in fact mainly impressive because of their size, but they are not particularly beautiful. Architecturally, the houses in Tana Toraja and Mamasa, but also the Rumah Adats in Flores and the Batak houses in Sumatra are more advanced, and more artistic. And the same counts for the wooden sculptures, the patongs, which are mostly big and tall, but esthetically not very special, and rather coarsely carved. They are often funny, though, like one with a moustache looking very much like a Dutch colonial officer – although judging from the state of the sculpture, this is probably a copy, in this climate not much made out of wood will have survived from colonial times.

In Barong Tongkok, next stop, are some interesting patongs (or jump directly to Tering, back on the river).