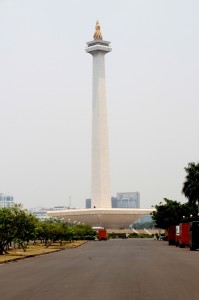 MONAS, the Monumen Nasional in the modern centre of Jakarta

Jakarta is huge, and spread out, neighbourhoods connected and dissected with broad avenues and highways. Much of the authentic coleure has been sacrificed for what is supposed to represent progress and development, and finding back some of the colonial architecture, let alone anything pre-colonial, is a challenge.

The city’s pride is its National Monument, MONAS, an uninspiring tall column in the middle of a large, but not very attractive park, Medan Merdeka. A ride with the lift brings you to the top, where a platform provides admittedly impressive views of the Jakarta skyline, but usually through a cloud of smog. 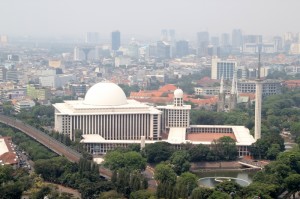 no misunderstanding about the dominant religion in Indonesia: view from the top of MONAS of the Istiqlal Mosque, with behind it the Saint Mary’s Cathedral

The only break in the high-rise skyline is to the north-east and east, where the distinctly lower, but still impressive rise modern Istiqlal Mosque competes with two 19th Century churches, the Catholic Saint Mary’s Cathedral and the attractive, round Immanuel Church, the Protestant bulwark that still provides occasional services in Dutch (as well as Korean, English and Bahasa Indonesia). Wandering around in this neighbourhood yields a few more, but heavily restored and adjusted, colonial buildings, like the old Governor’s Residence, now Ministry of Finance, and the old People’s Council, now called the Pancasila Building. 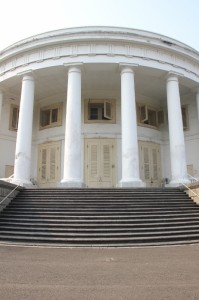 the round Immanuel Church 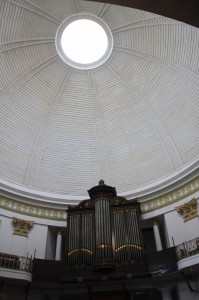 inside in the Immanuel Church, the organ and the wooden roof

For more, see the Jakarta entry in the 2013 Indonesia blog. The more picturesque Kota neighbourhood, and the historical Sunda Kelapa harbour have separate entries, too. And don’t miss the National Museum, if you have a couple of hours spare. 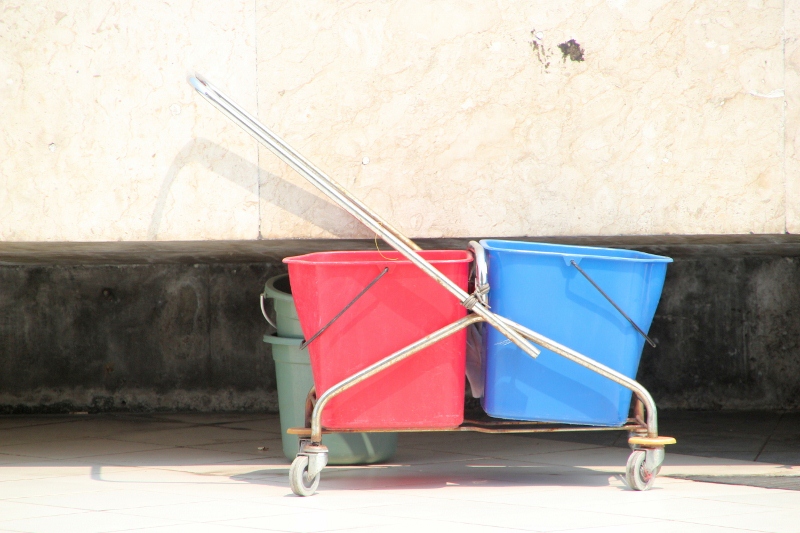