perfectly Javanese picture with perfectly conical Gunung Cikorei in the back

There are many places called Cipanas in Indonesia, ‘cipanas’ meaning hot water, a reference to hot springs. There are many hot springs in Indonesia. The Cipanas we visited is some two hour’s drive from Bandung – and Lembang – in south eastern direction. It has gained some fame for its many hotels that have hot spring water piped directly into the swimming pool, as well as into the en-suite bathrooms. It has so many hotels, and such an enormous demand for water, that this claim is unlikely to be true, and besides, who wants sulphur-smelling water to bath or shower with, let alone brush ones teeth with? But it remains a nice idea, and it attracts the tourists – mostly local tourists. 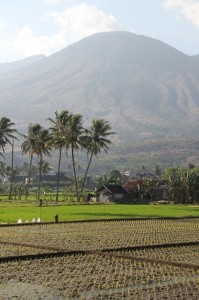 The hot springs are linked to volcanism, of course, and there are plenty of impressive volcanoes surrounding Cipanas. One is Gunung Papandaya (Papandaya volcano), a spectacularly active caldera subject to a separate entry, but others are Gunung Cikorai – perfectly cone-shaped – and Gunung Guntur. A walk through the countryside around Cipanas quickly brings you into quintessential Javanese landscape, rice paddies in the shadow of a volcanic peak. And into quintessential Javanese communities, with people of all ages sitting on verandas, men of working age trimming the rice paddies, and children flying their kites. 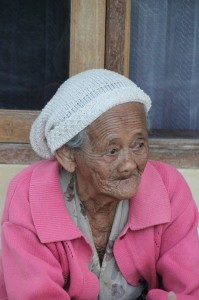 old lady enjoying the late sunlight on the verandah laundry reflecting in the water

Not too far from Cipanas is Garut, which apparently has an old railway station – which we failed to locate –, and something called Situ Cangkuang, a small island with the only West Javanese Hindu shrine left, reportedly 9th Century and thus older than Borobudur and Prabanan near Yogyakarta. On the way to Tasikmalaya, one of the larger towns around here, is Kampung Naga, an original Sundanese village. 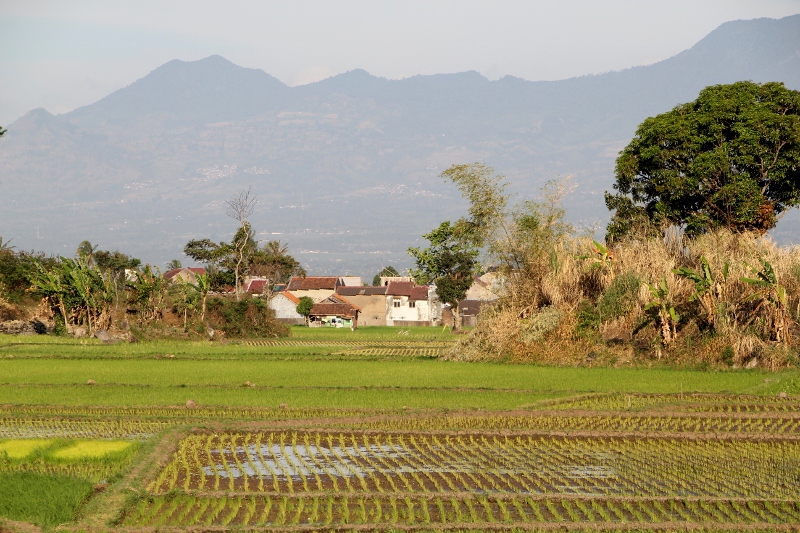