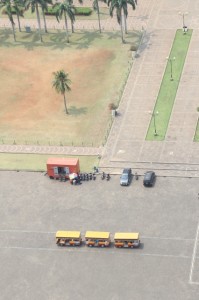 the view from Monas, the national monument celebrating Indonesia’s freedom

A modern city, more big than beautiful, with in the centre some traces of the old colonial past left, including a somewhat hidden cemetery

I don’t like Jakarta. I didn’t like it some years ago, and I still don’t like it. The problem with Jakarta is that it lacks a soul. The city is huge, it takes well over an hour with a taxi to get from the airport to our hotel in Thamrin, the neighbourhood considered by most to represent the city center. Smart choice, so we don’t rely on taxis that get stuck in traffic; no, we can walk everywhere! Right! Jakarta is not a pedestrian-friendly town. Every street seems to have a minimum of four-lanes, and often twice as many,  which are car-clogged at every reasonable hour of the day. The space in between the cars is taken up by thousands of motorbikes, who move far more agile then the cars, of course. Which makes crossing the street a hazardous adventure, to say the least. In fact, there are some purposely-installed traffic lights for pedestrians, but those are totally ignored by motorists and bikers alike. Mostly, there are no pavements in Jakarta, and in the few places there are, they are either being repaired, or they are in dire need of repair. Or they are used by cars as parking space. Any trees along any pavement have been maintained by the average-height Indonesian gardener without stairs, which means that the average-height Westerner needs to crawl on his knees to avoid the branches. The biggest draw-back for pedestrians, however, is the sheer size of town, walking one block is always much further than you thought it would be. And then there is the noise, always present around you, of all those cars. (To be fair, I have been told by an Indonesian friend here that there are also perfectly quiet neighbourhoods, with little traffic, and that every second Sunday is car-free in Central Jakarta, it is just that we haven’t experienced that yet – and that it is difficult to imagine.) 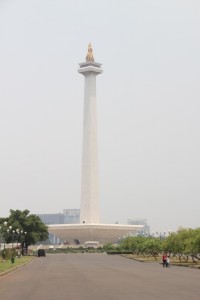 MONAS, or Monument Nasional, in marble bronze and gold 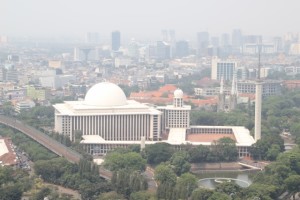 another view from MONAS, towards the biggest mosque of Jakarta, and reputedly of South East Asia; note the size of the old Dutch cathedral, just behind it to the right 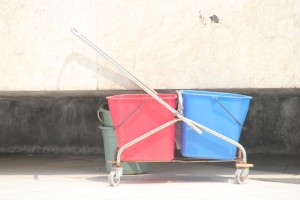 the marble needs to be scrubbed, of course

What about the sights? Any exploration of Central Jakarta starts at Medan Merdeka, the park that surrounds the Monas, short for Monument Nasional. The park is huge, like so much else in Jakarta, but not particularly nice. Admittedly, it is towards the end of the dry season, the grass is brown and dry, but there is also little variation in the vegetation. Broad tarmac strips lead from four different directions to the monument in the centre. Benches are hard to find. Just not a very attractive place to come and recover from the madness on the streets. The Monas itself is another case of big – a marble pillar of 137 m high with a golden flame on top – and not particularly beautiful. A lift takes you to just below the top, to a square viewing platform, but the view is somewhat limited by the air pollution. What you can see, is mostly big, ugly buildings in all four directions. 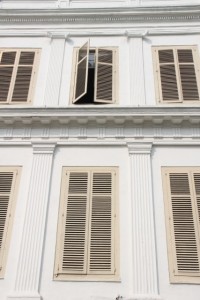 the old White House, the Dutch Administration’s building, now the Ministry of Finance 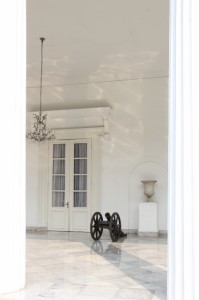 there is a trace of colonial, an old canon at the Pancasila Building, also Dutch-built 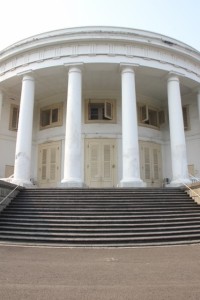 I was keen to find some authentic leftovers of the Dutch colonial area, and in Central Jakarta there are a few, but much less than I had hoped. Most of the old stuff has been pulled down – or collapsed spontaneously from lack of maintenance – and has been replaced by modern construction, again not very attractive. There is the odd palace, the cathedral, the ministry of finance building (which used to be the Governor’s Administrations Office, build in 1809), but all are isolated remnants bordered by four-to-eight lane car-clogged avenues. The nicest, perhaps, is the old Willemskerk, now re-christened Emmanuel Church, a largely wooden, round church. Among the church treasures is a silver dish from 1649, just to give you some perspective, although the present church dates from 1893. And, apparently, still has a lively congregation, with services in Dutch, English and Korean, as well as Bahasa Indonesia. 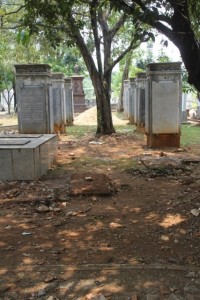 tombs at the old Dutch cemetery; these ones are still untouched 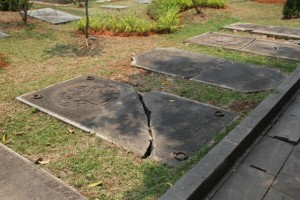 and 18th Century headstones, broken in places, but about to be repaired 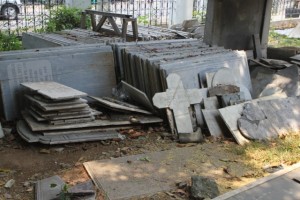 and more headstones, dug up – I wonder if they remember where to put them back

On the other side of the Medan Merdeka, hidden behind some smaller streets, is an old Dutch cemetery. Would this be the place to find some genuine colonial traces? Cemeteries are, especially in large chaotic cities, often oases of peace, away from the noise. Not so the Kebon Jahe Cemetery, as this one is called. Workmen are busy lifting tombs and headstones, and re-building the graves of those buried here – mostly Dutch, some Brits and the odd American. Many dates go back to the 16th and 17th Century, many of the deceased were colonial office bearers of some importance. Curious, to say the least, that local forces not only maintain, but improve the last resting place of their former oppressors. But the result is that for some time to come there will be colonial traces left, even though not really genuine anymore.

next: old Jakarta, which used to be called Batavia 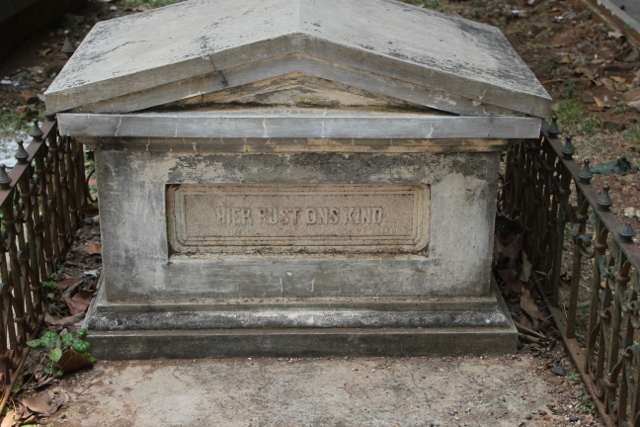 perhaps the saddest grave in the cemetery, `here rest our child’; a stark reminder that colonial life was not all as romantic and exciting as we sometimes imagine