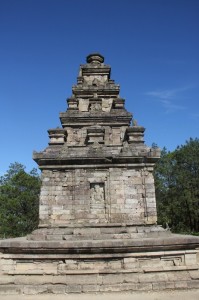 one of the Gedong Songo temples

Uninteresting Bandungan is the base for an early-morning trip to the Hindu temples of Gedong Songo, which also provides a spectacular view of multiple volcanoes.

Bandungan is a hill station away from the oppressive heat of the Central Javanese north coast. Guide books call it one of the prettiest hill-top retreats in Java, but that description was lost on us. The not-particularly-attractive centre is really small, an outdoor market on three corners, no more, and the rest of the town characterized itself through a multitude of seedy hotels and karaoke bars stretched out across rolling low hills; you need some form of transport, walking is not an option. 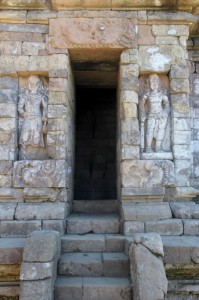 entrance to one of the temples 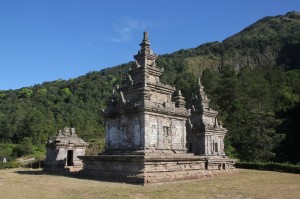 it is a nice setting, for the temples

The only reason to come to Bandungan – except for the nearby railway museum in Ambarawa – is to visit the temple complex Gedung Songo on the lower slopes of the Gunung Ungaran – the Ungaran volcano. Gedung Songo means ‘nine buildings’, referring to the nine 8th Century Hindu temples that have been constructed here. In fact, originally there were many more than nine, but nine is an auspicious number, which is a perfectly good reason to ignore the real number. In any case, only five temples remain, having been heavily restored in the 1980’s, and all are pretty small, and pretty simple. Add to this that the place has been heavily developed Indonesian-tourism style, and Gedung Songo becomes even less attractive. 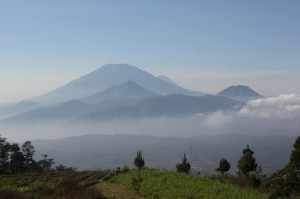 Gunung Merbabu in front, and Merapi in the back (I think) 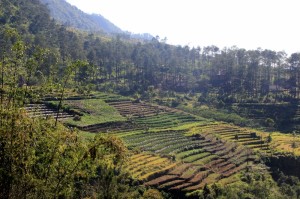 Unless you arrive real early, like even before the ticket boot has opened and souvenir sellers and tourist touts are in place. The site is open, so you can just wander uphill on your own, along the well-signposted paths, which lead along the temples and the hot spring – also closed, early morning – and will ultimately reward you with the real reason to come to Gedung Songo: the absolutely spectacular view of multiple volcanoes, best visible in the early morning, when the clouds have not yet come rolling in. From several spots on the slope you can get a clear sight of Gunung Sindoro and Gunung Sumbing to the west and south west, Gunung Merbabu right in front, and Gunung Merapi, the one next to Yogyakarta, a little further behind. I even claim to have seen Gunung Lawu, some 70 km away to the east. All perfectly conical-shaped. Brilliant! 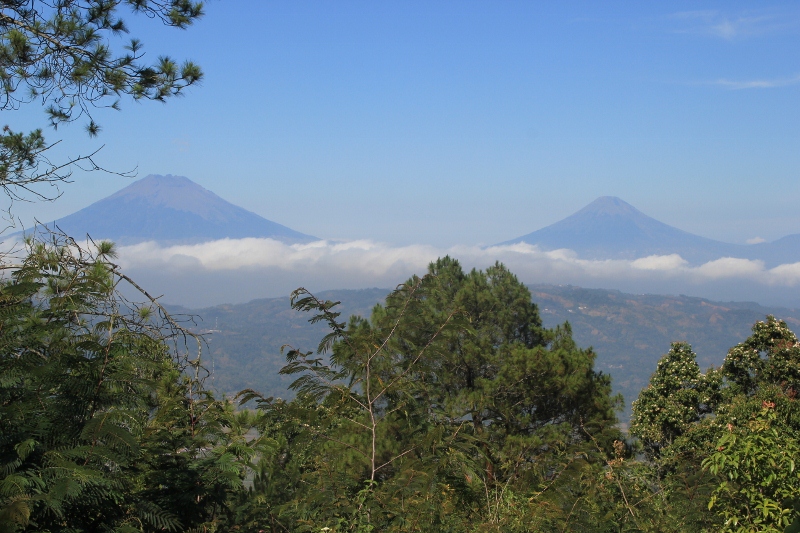