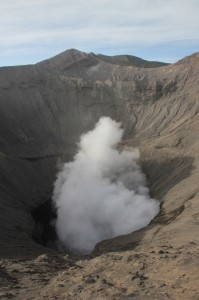 Java’s most famous volcano is also one of its main tourist sites, with all the conveniences that accompany this.

There are thousands of volcanoes in Indonesia, depending on how you define a volcano, but perhaps the best known, and most visited, is Bromo, in South East Java. And visiting Bromo is big business, you won’t have the volcano for your own. Sunrise is the time to be there.

First, one will need to go to a village called Cemoro Lawang (there are other access points as well), and change to a 4WD vehicle. Half of the villagers here seem to own one, or more, of those cars, simple jeeps that make the way to the viewing platform at Gunung Penanjakan. To beat sunrise, the time to be there, a whole string of headlights plows the night, through what is called the Sea of Sand, past the Bromo – although in the dark you won’t see anything of this yet. 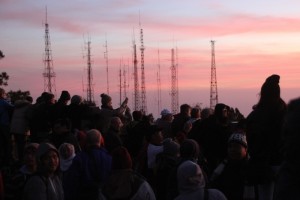 the viewing platform on Mount Penanjakan 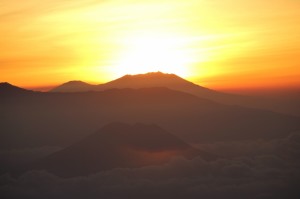 early view of the sunrise

The platform is actually located on a higher level than the top of Bromo, so that you can look into the volcano, something we do with hundreds of others. So early in the morning it is pretty chilly, but outfits with down-filled ski jackets, woolen gloves and hats, and ear warmers are a little exaggerated. At the other extreme are the few people who have decided that a tropical country calls for shorts, only. Entrepreneurs rent out extra blankets, a useful addition for those who take a seat on one of several rows of benches accommodating the tourist. 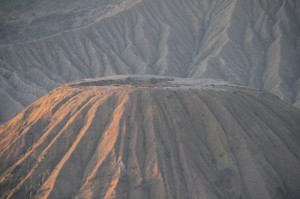 illuminated extinct crater of Gunung Batok, next to Bromo 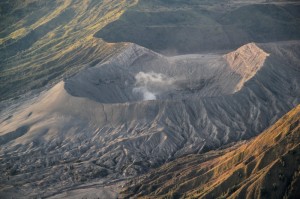 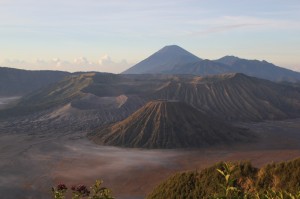 Gunung Bromo to the left, Gunung Batok in the middle, and behind Gunung Semeru towering over all the others

The view from the platform is definitely worth the early rising. In fact, Bromo is only one of several volcanoes inside the much older and larger, all-encompassing Tenggar crater. The slowly climbing sun dissolves the mist below, and then increasingly illuminates the flanks and the inside of these mountains. Some of the mist stays: it turns out to be the smoke coming from Bromo. In the distance, outside the Tenggar Crater, is perfectly conically-shaped Mount Semeru, with over 3600 meters Java’s highest peak, and equally smoking. 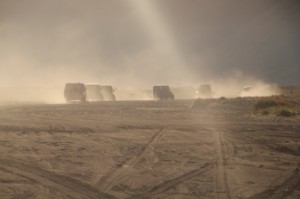 a convoy of jeeps in the sea of sand

After sunrise, it is time to climb the crater of the Bromo. The jeep drivers drive their cars, with tourists, en-masse to an area several hundred meters away from the crater – they do this so that their cousins from the other half of the village, those who own a horse, can ferry people further towards the bottom of the crater rim, for an extra payment. The crater rim itself has been adorned with stairs, to facilitate the ascend. Mountaineering for the masses, I have called this. Of course, some tourists go slower than others, who decide to overtake, thereby blocking the way down for those who have seen the top it already. Complete chaos, and here and there irritation. Yet, the alternative, a free-for-all, would surely crate far more damage to the mountain side. 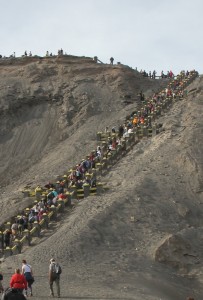 the stairs to the top

On the top, hand rails stop people from falling in the crater, especially right at the end of the stairs. It is pretty crowded here: having come this far, why would you walk another fifty meters to the left or the right? Doing so, however, does allow a quiet, enjoyable view down, in a hole that now expels a permanent plume of smoke. Or a view in the other direction, towards the Tenggar rim and the Sea of sand. Once again, worth the effort. Especially because it is so little effort!