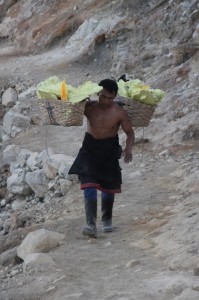 sulphur miner carrying his baskets out of the Ijen Crater

The Ijen crater is equally spectacular at night and early morning, combining the unique blue fire with a revealing sunrise

The term Ijen Plateau is used to describe an isolated, forested area in the eastern-most part of Java, from which no less than three volcanoes sprout up. The most accessible one, and most spectacular, is the 2368 m high Ijen Volcano, which can be reached with a 1-2 hour hike to the crater rim. 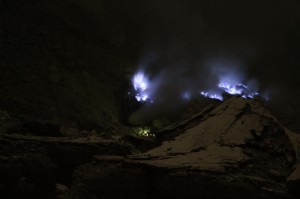 blue fire at various spots in the crater, surrounding the yellow mining spot

Mostly, a volcano is at its best at sunrise, but in the case of Ijen, it pays off to start walking at two in the morning. This allows sufficient time to descend into the crater itself, still at night, and observe the extraordinary phenomenon of “blue fire”. The blue fire, to the human eye only visible during the night, is in effect burning sulphur. This sulphur was deposited on the inner flanks of the crater rim during volcanic eruptions, which contain sulphurous gasses, but too high to be readily accessible. So the miners lit the sulphur to make it liquid again, and allow it to flow to the bottom of the crater through a set of pipes. Once the sulphur flows out of these pipes, it solidifies again, and can be easily mined. The mining continuous 24 hours a day, men collecting the sulphur at the end of the pipes, in baskets, and then carrying these 70-80 kg loads up the crater rim, and down the mountain. I found climbing into the crater and out again, via a steep path, occasionally jumping from boulder to boulder, already challenging enough without such a load! 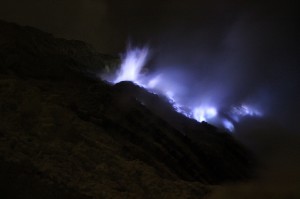 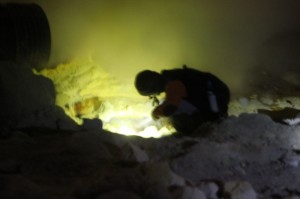 miner inside the crater 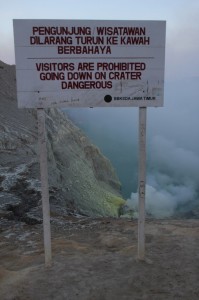 this we only saw after we returned from the crater floor…

Climbing out is indeed what one does, towards sunrise. Back at the crater rim, the sun in fact rises behind one of the mountains, at least in October when we were there, and it takes a few hours for the scenery to turn really beautiful. What we waited for, was the sun light slowly climbing down the inside of the crater wall, and ultimately illuminating the lake at the bottom, turning it from dull grey into brilliant blue-green – behind the sulphur clouds that kept on trying to obscure the view. 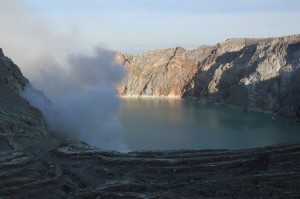 the crater lake, finally illuminated by the sun

On the way down, the views of the surrounding volcanoes we had missed in the dark. And of the forest, and the coffee plantations, that make this such a wonderful area. Highly recommended! 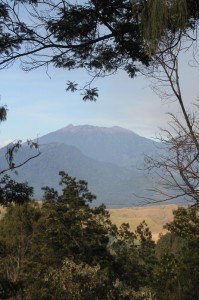 Gunung Raun, the highest volcano on the Iljen Plateau 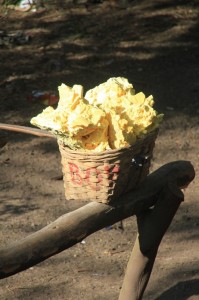