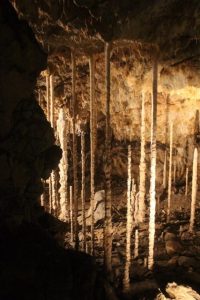 We have seen many caves before, and almost always they disappoint; Moravsky Kras is not different. But the old Communist-era factories nearby remain fascinating!

The caves of Moravsky Kras have been so enthusiastically described in both guide books we carry, that we made an exception to the rule – the rule is: no caves, they are simply not interesting enough, we have seen too many already, they all look the same. So we headed for Skalny Mlin, one of the two places where tours start to the most impressive of the cave, the Punkva Cave, complete with boat trip on the Punkva river, which flows partly through the caves. Anticipating the popularity, especially during what we now have come to recognise as the Czech holiday season – there may be no foreigners, but there are still an awful lot of Czechs holidaying in July -, we got there relatively early. To no avail: the next available tour for the Punkva Caves was in no less than 2.5 hours, and we were not going to wait for that, sitting on a bench in the miserable rain, or in a packed tourist restaurant full of screaming children. So we got to the next-best cave, Catharina’s Cave, for which the next tour was in 30 minutes – just enough to work out how the coffee vending machine in Czech-only language worked. 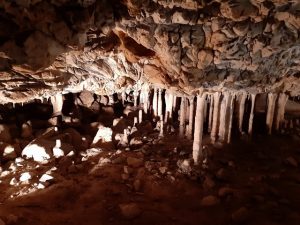 but, impressive it is, thinking of all the rock that has disappeared

No, no, no, we should not have done this! Once more, we are guided in a group of cave enthusiasts, across concrete walk ways that lead into an atmospherically lighted limestone cave, with the occasional stalactite and stalagmite, and even some stalagnates – for columns of carbonate deposit that run uninterrupted from ceiling to floor. And yes, once again our imagination is called on to recognise the seven dwarfs, a witch (helpfully equipped with a wooden broom), three musketeers, a bear, a pheasant, an owl, a bamboo forest, and whatsoever – the commentary is in Czech only, so what is not in the English language booklet is lost on us. 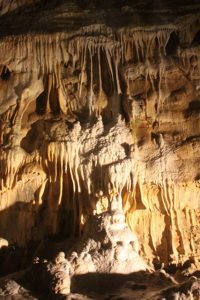 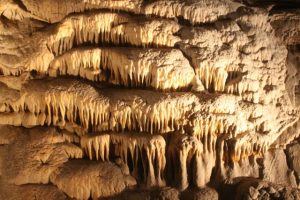 this is more diffiicult, I don’t get further then ‘ dripping limestone’ the slick cave mechanism also provides for a moment of colour 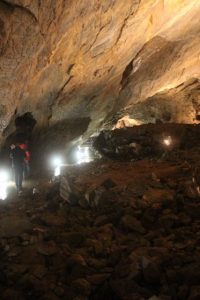 ultimately, we need to stick to the concrete path, of course

I have to admit, the cave was a slick one, equipped with special effects. The guide was carrying a remote control with which she could switch on some tacky music to demonstrate the acoustics, or switch off all the lights to show how dark it otherwise would be. But we were strictly forbidden to step of the concrete, or touch any of the rock, with the exception of a wish stone, probably dripping from Corona viruses by now. And for pictures you had to pay extra. 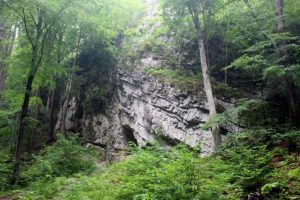 the limestone that facilitates the karst landscape 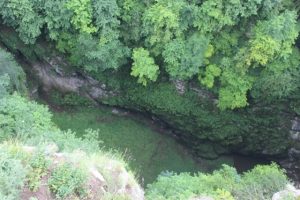 a look from above, into the ravine

After this experience, we gave up looking into any of the other caves; instead we took a cable car up the steep slope, to view the karst ravine we had been walking through, from above, and then we walked down for an hour or so. Enough of karst  landscape for a while, enough of caves forever – who knows, finally?

What we hadn’t expected, however, is that the outskirts of nearby Blansky is home to several old Communist-era factories, some by now obsolete, but others still in use, it seems. So far we have come to know the Czech Republic as a pretty modern state. Perhaps full of medieval and 18th to 19th Century remains, but few from the second half of the 20th Century. Yet here they are; I have always had a certain fascination for these.

next: Olomouc and Brno 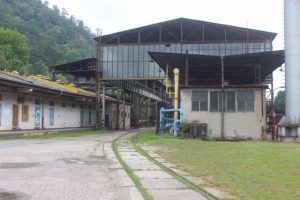 one of the old factories 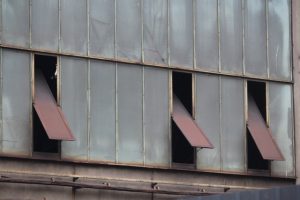 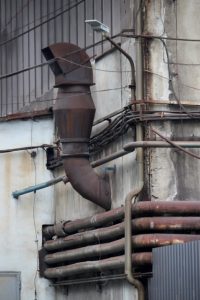 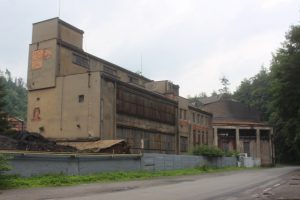 and an overall rather rundown look, this factory