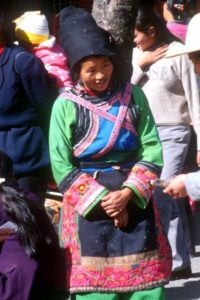 one of Yunnan’s many minority women

Yunnan: The China of the minorities

At the end of our three years in China, in February 2000, we had just enough time for a quick visit to one of China’s southernmost provinces, Yunnan, home to many of China’s often colourfully dressed minorities. We went to Kunming, Dali and Lijiang, the main tourist sites, and vowed to come back one day, with more time on our hands. Below some of the impressions, and lots of photos from that time (scanned slides, a little discoloured in places, I am afraid). 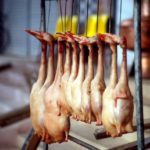 Kunming is the relaxed capital of China’s southern-most province, Yunnan, with a lovely old centre

A trip to Yunnan usually starts in Kunming, the pleasant provincial capital with its ‘eternal spring’. More about that later! We checked in in the New Era Hotel, a very new hotel indeed, judging from the lack of guests. The 28 story hotel provided a nice view of the city, and especially over the old quarters, the only attractive part of the city.

This area, also called the Muslim quarters, is a collection of narrow alleys and winding streets, some still lined with old wooden houses, and clogged by market stalls selling everything imaginable. Old men hang around, smoking their pipes, others sit at the food outlets, small hole-in-the-wall affairs serving noodles. Especially memorable are the rows of ducks and Yunan hams, made of beef rather than pork, displayed outside. 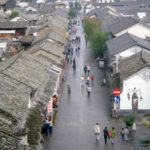 Touristic Dali has plenty to offer, especially outside its touristic centre.

Dali is a strange place, with attractive architecture of the old houses in the central part of town, and narrow alleyways in between the main arteries. Some of the main streets have been turned into pedestrian roads, another testimony to tourism. But it is the kind of shops that divides the town. In the western half, batiks, artefacts, embroideries and ‘old’ silver (which is neither old, nor silver) are for sale in tacky souvenir shops, which are complemented with western-style café’s serving everything from fried eggs for breakfast to Hamburgers and French fries, Mexican taco’s and Indian curries. The southern part of town caters for Chinese tourists and sells a completely different type of souvenirs: stone vases, some of enormous dimensions, framed stone slabs – not the type of stuff a backpacker would easily take home. And there are literally hundreds of these shops, suggesting that the tourist loads in season must be enormous, stifling, and that perhaps January was not a bad time at all to visit, despite the cold. 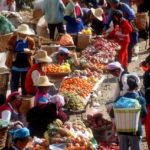 Dali is a good base for exploration around the Er Hai Lake, where the Shaping market and the village of Xizhou form attractive targets for a day trip, providing some insight in the minority culture of this area.

Thirty minutes from Dali, situated at the northern end of the Er Hai Lake, is Shaping, famous for its Monday market. Very colourful again, dominated by Bai dresses in white and red, long plaid skirts and conspicuous head decorations. At least one other minority, perhaps the Naxi in purple and blue, and occasionally green, was also well represented. As markets go in China, they sell everything, from incredible mountains of cabbage, huge chickens and bags full of red peppers to thousands of baskets and, for the tourists, antiques again. And tourists there were, arriving in droves on specially laid on minibus tours from Dali some 15 minutes after we had gotten there. A swarm of westerners, continually moving as one cloud, and only very slowly dissipating in between the stalls. 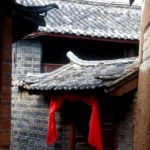 a house in Lijang

Lijang, too, is entirely focused on tourists, and so are many of the surrounding villages, where Chinese minorities form the majority.

The road to Lijiang, some 130 km north of Dali, shows a quickly changing landscape, from the fertile agricultural plains around the lake to the grassy, yellow hills with not much more than low scrub as vegetation. Here no people live, on the contrary, the dead are buried here, evidenced by graves on all sides of the road. However, further on life, and colour, returned again, with terraced fields flanking river valleys, sturdy villages build against the lower ranges of the mountain slopes and the occasional herd of goats, flanked by a cow or two, crossing the road.

Lijiang turned out to be even more touristic than Dali. 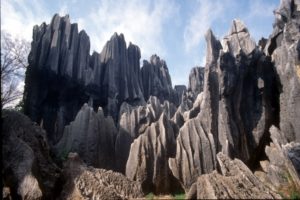 the Shilin stone forest, outside Kunming

After we came back from Lijiang to Kunming, the only thing left to do was yet another tourist trap, the Shilin stone forest outside Kunming. This incredible natural phenomenon consists of sharply, and deeply eroded limestones, leaving steep pinnacles of 40-50 m high, and narrow passage ways between them, very spectacular.

The day we were scheduled to leave it was snowing, for the first time in 20 years, or so we were told. The airport was closed, and we were trapped in the hotel for the next 48 hours. So much for the eternal spring in Kunming! 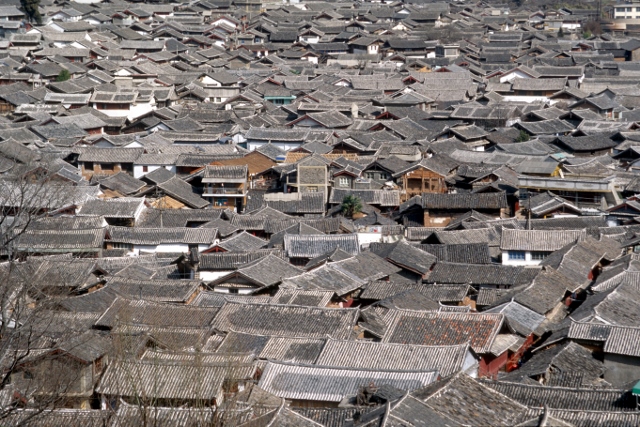