(31) Across the Karakoram Highway Tamil Nadu: Four months after

Tamil Nadu after the Tsunami 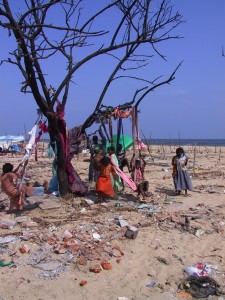 In 2004 I worked as a Country Director for Plan, an international child-focused humanitarian development organisation, in India. Disaster struck on 26 December of that year, when the Indian Ocean tsunami that devastated so many countries around the Indian Ocean, also hit the coast of Southern and Eastern India. Especially the State of Tamil Nadu was badly hit. I visited the area shortly after, to assess what Plan could do to help. This is a shortened version of the article I wrote at the time.

Two weeks after the tsunami of 26 December hit Tamil Nadu in Southern India most of the rubble has been cleared. In Chennai, on Pattinambakkam beach, some 2000 huts were washed away. The official death toll in this neighbourhood is 79, but the unofficial estimate is much higher; of the 26 kids that were playing cricket on the beach on Sunday morning, only one survived. 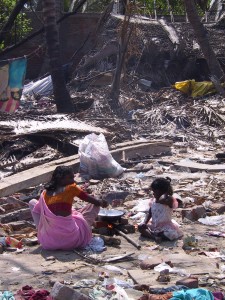 woman cooking in what is left of her house 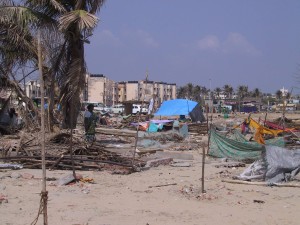 What remains is a vast wasteland. The traces of the huts are still there, some had concrete floors of which parts are still visible, but most of it has piled up against the pucca houses nearer to the road. The people want to return, want to rebuild their properties on the land they have occupied for ages – close to the sea, close to their livelihood, fishing, the only thing they know – but the government has other plans. This disaster is also a convenient moment to implement an international nautical agreement that specifies that no build-up should occur within 250 meters of the high-water line. During the day the fishermen and their families, those who survived, come back, to claim their land, to rope it off, sometimes cover it with a piece of tarpaulin, in the hope that one day they can rebuild. Children are playing in improvised swings in the few trees that remain, their mothers are cooking lunch where their houses once were. But at night the police will make sure that the beach is vacated, and that the people return to the camps, away from the shore. 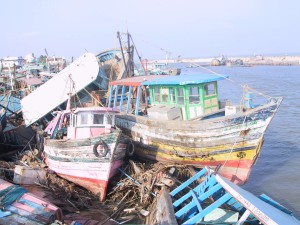 The worst affected area in Tamil Nadu is the district of Nagapattinam, some six hours drive south of Chennai, which suffered by far the most casualties in India, well over 7000 at the last count. In the town of the same name the destruction is enormous, houses damaged by incoming boats, and the remainder of the fishing fleet stacked up, boat upon boat, against the buildings surrounding the harbour.

The nearby school in Akkarapettai has been flooded, and the sanitation block destroyed. One of the buildings will have to be replaced, as the structural damage to the hall, from prolonged water logging, has rendered the building unsafe. Of the 760 pupils studying here, 500 have returned already; sadly, some will never return. What is necessary are temporary shelters to ensure that lessons can restart as soon as possible, so that children can get back to some form of normalcy again, greatly helping them with overcoming the psychological effects of the disaster. 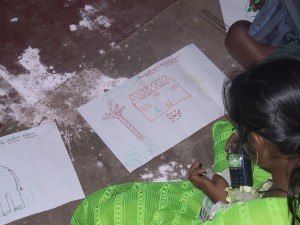 Shortly after the tsunami  a children’s recreation center and crèche have been set up, and currently some 65 children enjoy the games and toys, and the opportunity to draw and play. This is an important element in the efforts to help children deal with the trauma of their experience. Children are still fearful of the sea, and their drawings and conversations carefully exclude anything to do with the disaster. 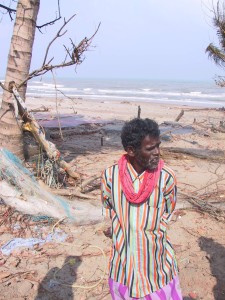 Kallar village, north of Nagapattinam town, is typical for the sort of problems the people face in the aftermath of the tsunami. The village used to be a combination of thatched huts on the beach, and concrete houses further inland, but little remains. 150 huts were washed away, and most of the houses have significant structural damage. The water in some of the houses reached to above the doorways. 103 people died here in the disaster, almost all women and children. One of the survivors, Alaghar, tells of the first wave, which came at around 9 am, not crashing, but gradually, albeit rapidly rising water that ultimately reached to his chest, inundating everything up to hundreds of meters inland. It was only the second and third waves, at around 11 and again at 12.15, which crashed over what had been left. Most men survived here, because they were still at sea when the first flood came, in fact they did not notice much of what destroyed their village. But they had reached shore when the follow-up occurred, and swept their boats on the beach, rendering most of them unusable, and destroying their nets. 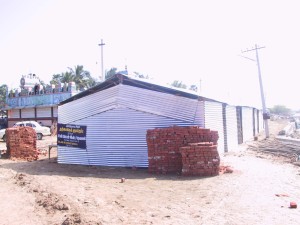 The temporary shelters are almost complete, and will house some 400 people for as long as it takes to rebuild the village. The local health post, normally occupied by a nurse, is now staffed by two experienced doctors from Trichi, a city some 150 kms away. The doctors praise the government, who have avoided an epidemic here through swift action, which included chlorination, decontamination and immunization. 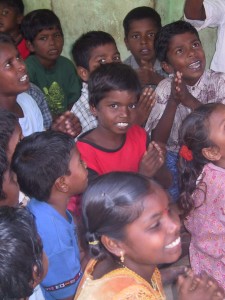 In a play center in Kallam children were visibly enjoying themselves, singing and dancing, in stark contrast with two weeks ago, when, the children were dazed, subdued, and disoriented, so shortly after the tsunami. Now they have to talk about their experiences, and some have started to draw tsunamis; the results are vivid, if shocking, expressions of their memory. 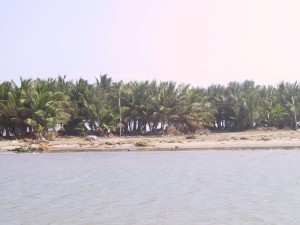 Cuddalore is another district badly hit, especially the Chidambaram area, where most of the coastline was protected by a string of islands and mangrove swamps. The islands themselves were, however, not protected, and on one of them, Chinnavaikal, there was literally nothing left, all 50 huts were completely destroyed. It is a miracle that only 15 people from this island died in the event, of which 10 were children. As in other areas, the first wave was in fact just a rapid rising of the water level, perhaps 6-7 feet, enough to overflow the entire island. People fled to the mainland, wading and later floating on anything they could get hold of.

There is no camp for the survivors, people have moved to the mainland and stay with relatives, or they sleep in the community centre. Some sleep in the open, some nights. There are no toilets, and they defecate in the open as well, but then, there were probably no toilets to begin with, in this village. 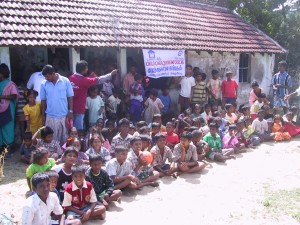 The islanders want to rebuild their community on the mainland. The state has allocated land for them, but this is too far away from the sea, and they have now set their eyes on a piece of private land, previously a shrimp farm – until this was banned three years ago because of the environmental damage shrimp farming did.

A local play center has been set up after the tsunami in a house on the mainland that was spared the tsunami. The house is almost too small for the 60 kids who attended the center The children were engaged in drawings, many of which depicted tsunamis and their aftermath, again spine-chillingly realistic. 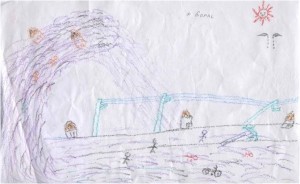 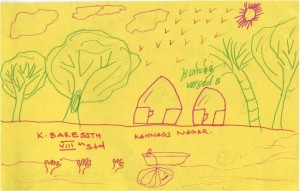