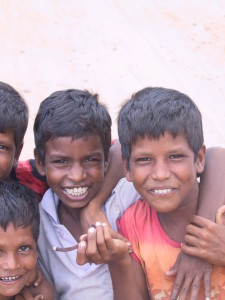 Four months after the Indian Ocean tsunami of 2004 struck along the Indian Coast, and almost four months after I visited this area for the first time, I went back to observe the progress made by my organisation, Plan International, with the rehabilitation of some of the affected communities.

Driving south from Chennai, the capital of the tsunami-affected South Indian state of Tamil Nadu, one soon comes across rows and rows of temporary shelters, on both sides of the East Coast Highway. Four months after the tsunami the shelters have been built, the camps have been established, the first shock has been overcome, and the sense of urgency, so clearly present immediately after the disaster, has, unfortunately, subsided. Where the shelters were originally meant to be used for some six months or so, it is now clear that the people who lost their houses will have to wait a lot longer for their new houses.

Initially the government of Tamil Nadu had decreed that everybody would have to move at least 500 meters away from the high water line. The most devastated areas, after all, had been the beach settlements of the fishermen and the zone immediately behind the coast, where agricultural land got inundated with salt water, ruining the fertile soil and irrigation ponds. However, land is expensive, and the areas the government planned to make available were often quite far away from the coast. Many fishing communities, dependent on the sea, resisted moving inland, and with an election looming, the government has now, albeit unofficially, made a complete U-turn. People will be allowed to rebuild their houses closer to the beach, although without government subsidy, and probably without title to the land on which their families have lived for generations. But clear guidelines, and official approvals, are still awaited, and without that, no construction can start in earnest.

Immediately after the tsunami aid organisations of all creeds rushed in to help: according to the District Collector of Nagapattinam, the highest administrative authority in the district, no less than 500 NGOs had mobilised themselves in the weeks immediately after the tsunami. Now, four months later, there are only some 40 left. It is sad to see that so many organisations, especially Indian ones, use the disaster to profile themselves, and presumably collect significant funds, only to fade away soon after. In many of the affected villages, banners and sign boards claim the activities of so many NGOs, but according to villagers, in most cases the banners are the only thing they ever see from those organisations. 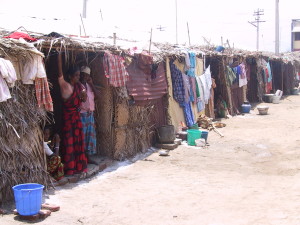 In Nagapattiman itself life is returning to normal. Most of the debris has been cleared, although so here and there a boat can be spotted in a conspicuous position, not where one would normally expect it. But repairs have started, and everywhere people can be seen working on the trawlers. Many are demonstrating their entrepreneurial skills, and have started their own boat yards. The media attention that this town has attracted becomes obvious when the boys in the picture demand to see the LCD screen of the digital camera. In fact, they are disappointed that it is only a still photo, and not a short video clip. They have become intimately familiar with modern equipment, that is clear. 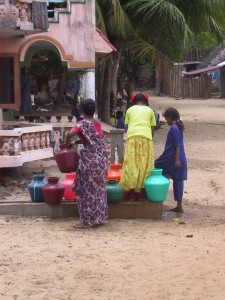 In Kallar, a fishing village just outside Nagapattinam town, 128 temporary shelters have been constructed. Not content with the original design – corrugated iron walls and roofs -, community members have installed heat proofing under the roofs, through a simple technique using plywood. This has reduced the temperature inside by 4-5 oC, a noticeable difference. They have also installed thatched verandas, to extend the living area and to protect the walls from direct sunlight, further reducing the temperature inside. 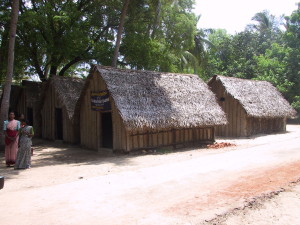 In Manalamedu, a small agricultural village in Nagapattinam district, the villagers were adamant that they did not want to live under tin roofs, so together with the NGOs they designed a more traditional form of shelter, with a thatched roof and with coconut leaves as walls surrounding a concrete floor. The shelters are a lot cooler, and also bigger than the corrugated iron ones. A walk around the village shows the damage done to the livelihood of these people. Whole fields of cashew nut trees have been uprooted by the waves, leaving only dead trees behind; the agricultural lands have been inundated, irrigation ponds have turned salty. The people have started to remove the salt-impregnated topsoil, and will be flushing the ponds, then cleaning the land with fresh water. After fertilizing it, they will initially plant salt resistant crops, and slowly restore their livelihoods again. It may take a couple of years for the land to return to its normal yield, especially to get the high value cash crops back. Yet there is a spirit of can-do, and people are working together to get back to normal. 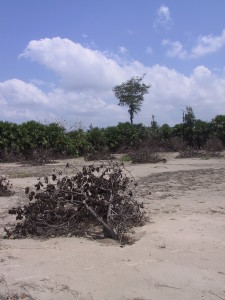 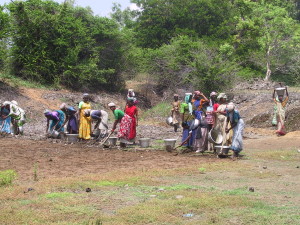 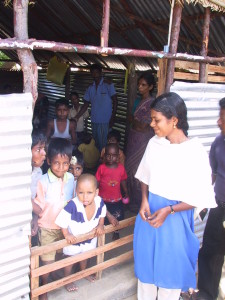 The play center, operating from a temporary shelter, caters for some 25 kids, of all ages, and it is gratifying to see them having fun. Quite different from a few months ago, but the children in this, and many other villages, seem to have recovered well from the trauma that the tsunami must have caused them.

The rehabilitation phase for the villages will include building of permanent houses, repairing water and sanitation systems, and restoration of the livelihood of the people. Also the general facilities need to be rebuilt, like pre-schools, primary schools and secondary schools, and clinics. This process will probably take another 3 years, in stark contrast to the seconds it took to destroy, back then on Boxing Day 2004.