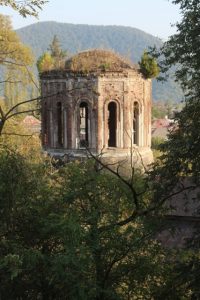 Close to the border, un-touristic Zaqatala has not too many sights to offer; but, it has the annual nuts festival!

On the way to Zaqatala, some 40 km from the Georgian border, and our last stop in Azerbaijan, we stop in Qax. Not for the town itself, which, according to our guidebook has older houses that ‘have been given a faux-antique look on a lane guarded by castle-style gateways and warrior statues’ – some other Decree of a Chairman, perhaps. No, we take a taxi to ‘charming little’ Ilisu, a small village up a beautiful high-altitude valley. Hmmm. In fact, most of Ilisu is heavily developed for tourism. Even the president has a house here, and it looks like many of the old-style buildings have made way for a series of holiday mansions for the rich and famous of Azerbaijan. And for the less rich and less famous there are a whole string of hotels and restaurants that cater for the local tourists. Who have little time for old-style buildings and charming villages, but come for the scenery, or the hiking perhaps. It is pretty cloudy, and we can’t really appreciate the views, neither do we plan any hiking here. 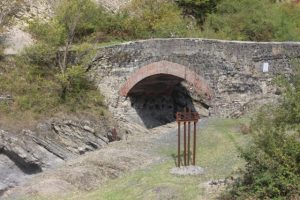 a small bridge in the Ilisu valley 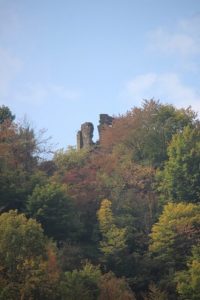 another ruin, probably also a church, in the valley 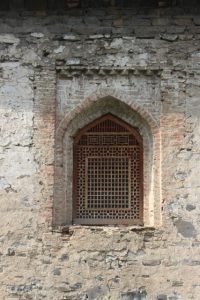 and the window of a mosque, one of the few old buildings left in between the tourist devlopments 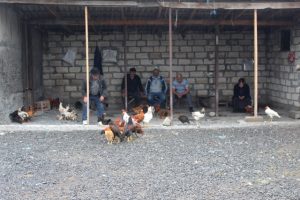 the local chicken market, a rather humble affair 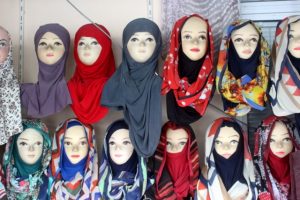 headscarfs in the Zaqatala bazaar 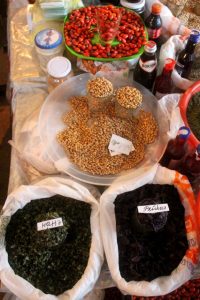 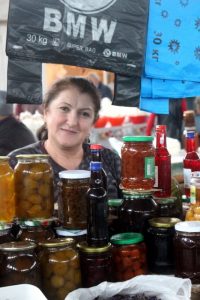 the woman who does the pickles, from her own garden

So we continue to Zaqatala, where, again according to our guide book, there is very little to do or to see. An old – well, 19th Century – fort, built by the Russians. Some authentic palatis – you know about palatis now, the old Soviet-style cheap 4-5 story high apartment buildings – with intricate laundry drying systems. A ruined church, which may have been Albanian, but more likely Armenian, given its present status. And a colourful bazaar, partly covered, which sells everything, literally everything, from fruit and vegetables to meat and cheese and spices to shoes and cloths and head scarves. But what our guide book didn’t know – and neither did we, before we got here – was that Zaqatala has once a year its Nuts Festival. This is the nut-producing area of Azerbaijan, and that needs to be celebrated. the proud cheese lady, or one of them 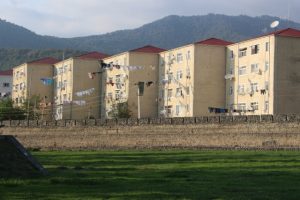 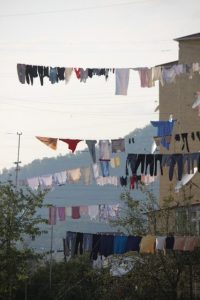 with laundry reaching out to poles across the street 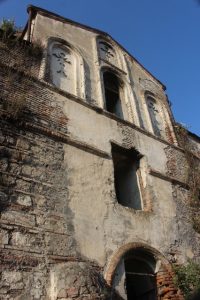 the ruined Albanian church in Zaqatala 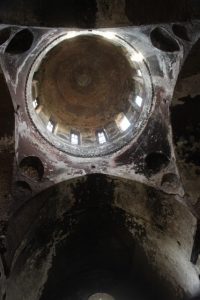 inside, view of the dome 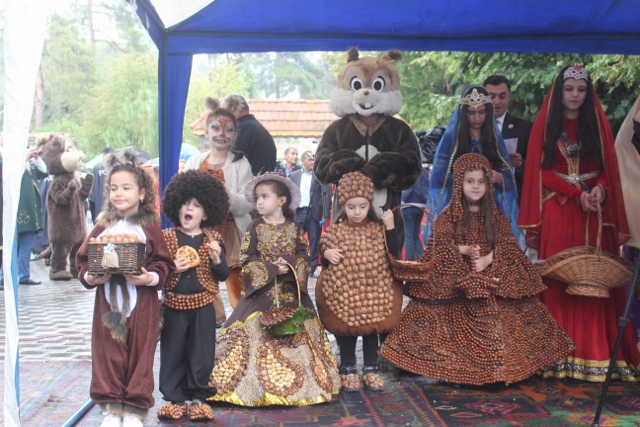 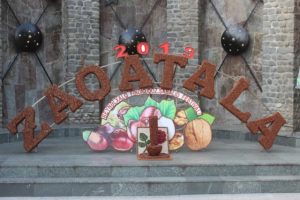 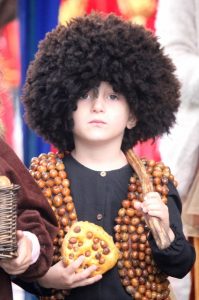 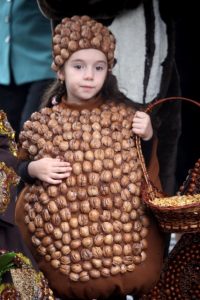 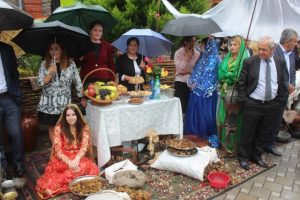 one of the stalls with goodies, for officials first 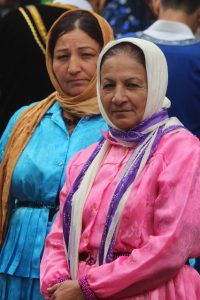 the ladies in traditional dress, sort of 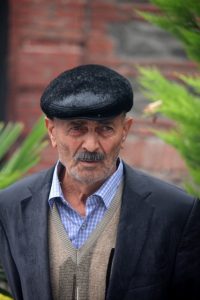 and the man, too – this hasn’t changed in centuries 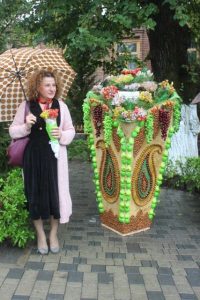 one of the exhibits 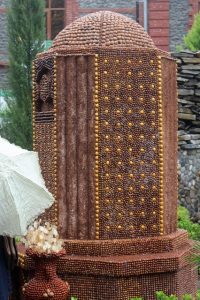 It was raining softly when we left our hotel and took a taxi to the Maidan, the central square where the festival was to take place. Long before we got there, streets had been blocked off, so we walked the last part. And we were just in time: the reception committee, made up of four women in pretty traditional dress and five children is even prettier nut costumes, was just being put in place by important-looking women in black dresses. Only to be thwarted by the arrival of some really important officials in suits, surrounded by photographers and camera men. All the locals had already been directed behind the crush barriers by the police, who had turned up in numbers, but curiously enough we were left where we were, right next to the stage. The advantage of obviously being a foreigner?

When the speeches started, of which we couldn’t understand a word, of course, but I don’t think we missed much, we walked to the park itself, where lots of nut-related stalls and other exhibits had been mounted. We had to wriggle ourselves in between few suits aside, who were all carefully listening to the most important official, but after that we had the park for ourselves. It turned out that all the entrances to the park were still sealed off, the general public not yet allowed in before the first official – would it be the Chairman of the Supreme Maljis himself? – had inspected the exhibition. Except that the foreigners had unwittingly beaten the Chairman! And everybody was so friendly! We got to taste various biscuits prepared with nuts, we had uninterrupted views of the works of art – any picture as long as it had been constructed with nuts.

In the meantime, it had stopped raining softly: we got soaked. I felt ready bad for the people of Zaqatala, who had obviously spent so much time and effort in preparing for this festival, and now had to wait in the pouring rain until the speeches were finally finished. At least we didn’t need to wait, we got back to our hotel, and took a taxi to the border.

But, except for the weather, what a nice end of our trip to Azerbaijan this has been.

next: a brief look-back at our Azerbaijan trip. Or skip directly to Tbilisi. 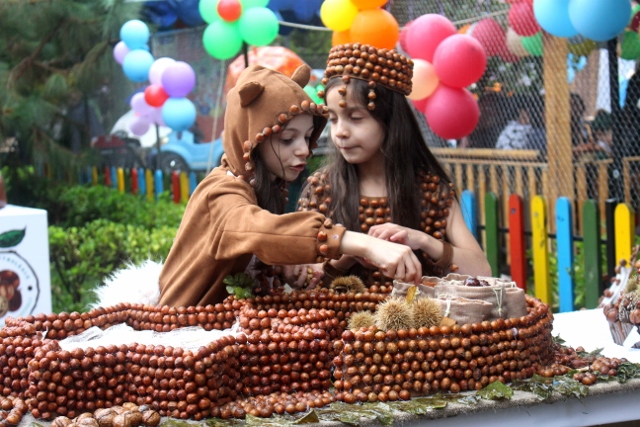 and these two are up to no good…