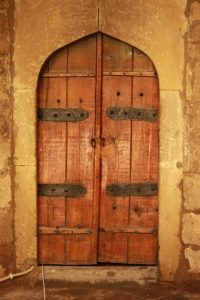 a door in Icarisahar, the Old Town of Baku

The small old centre of Baku, the Icarisahar, is an attractive, if somewhat complex, maze of streets and alleys, with some attractive but over-restored, monuments. 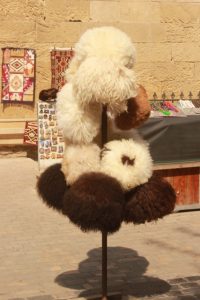 collection of hats, for the tourists 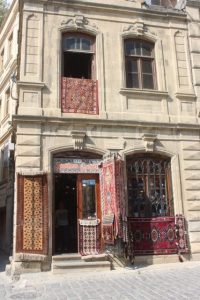 carpet shop, one of the many 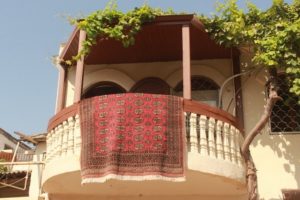 not sure whether this carpet is for sale, too 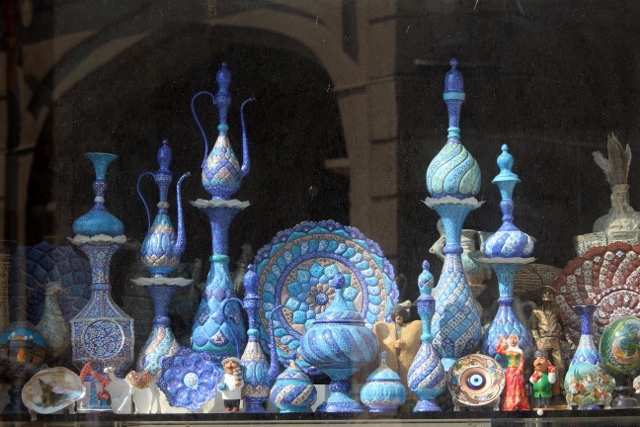 some of the souvenirs are quite elaborate, actually

But let that not put you off from coming to the Old Town; we did so, as we had our hotel booked here, and we enjoyed it for most of the time. Except the first time. We took a taxi from where we were dropped by the airport bus. The taxi driver, who didn’t speak any English, of course, had gotten instructions from a fellow driver, and had phoned the hotel for directions, so a piece of cake, no? Except that he took several wrong turns, got stuck in the narrow streets, and got so nervous that he kicked us out – not without cashing his, so we learned later, extravagant fee -, and vaguely waved in the direction of an even narrower street. Had I told you already of those nice, authentic cobblestone streets? And of the endless stairs up and down, in between streets? Not exactly ideal for suitcases with wheels. Especially not if you have, really, no clue in which direction you need to go, because no street is straight, and every street seems to have one of only three or four names – if they have a name at all. In the end we employed an old man who took us to our hotel, but not without asking himself several times. How were we ever going to find this back ourselves? 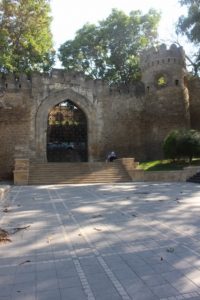 one of the entrances to the Old Town 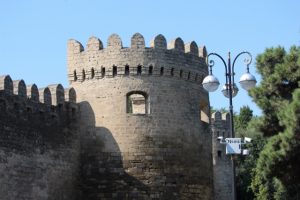 and the ‘ancient’ fortifications, somewhat restored, to say the least 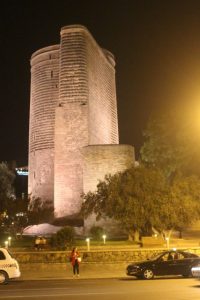 the Maiden’s Tower, in the evening

Which turned out to be relatively easy. Because around the corner of our hotel is a street that heads down, windingly, to the Maiden’s Tower, one of the highlights of the Old City. A massive slightly sinuous tower, with thick walls, 29 meters high, and several floors inside which have been incorporated as a museum exhibiting Azerbaijani treasures. Well, those that have ended up in other museums around the world, and are here presented as holograms – plus a few pieces that are physically present, in collaboration with the Georgian National Museum. The top of the tower provides a nice view over the town. 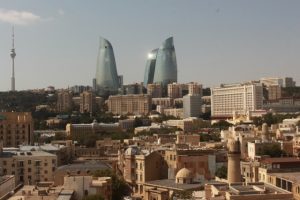 view from the top of the Tower 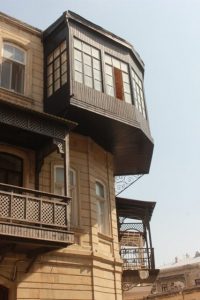 wooden balconies, restored, but keeping with the nature of the town 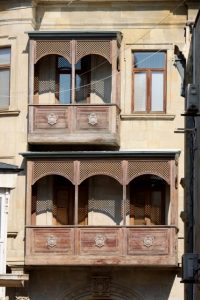 another pair of balconies, fitting in nicely, and characeristic for Old Baku 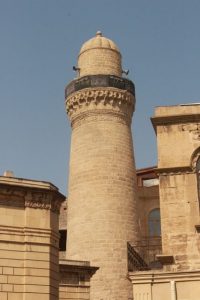 a minaret next to one of the old mosques in town 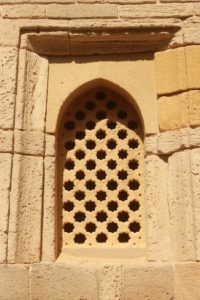 a window, of sorts, making looking out almost as difficult as looking in

But the real fun is, of course, wandering through those narrow alleys, up and down stairs – without suitcases -, under old, overhanging wooden balconies. Past the occasional mosque, enriched with a simple minaret. And ultimately ending at the Palace of the Shirvanshahs, the khans that ruled Baku and its surroundings either as independent country, or as a vassal state, until the 16th Century Persian takeover.  The Palace is a mostly 15th Century construction, but what you see now is the result of an extensive restoration 15 years ago. Yet, the restoration of the palace – and of much of the old town, the walls, the house – is fairly tastefully done, albeit in parts a bit too obvious. And the palace, with various parts at different level, is a nice enough place to explore; not very big, probably testifying to the humble nature of the khanate at the time. 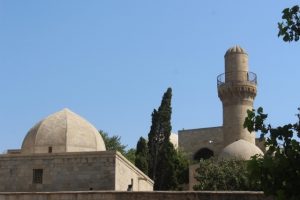 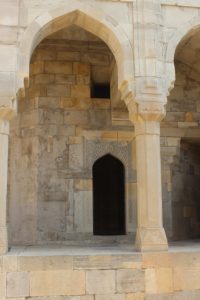 entrance to the palace proper 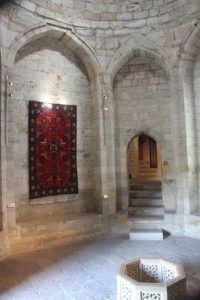 and a look inside the palace 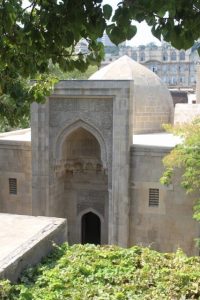 the tomb of the Shirvanshahs 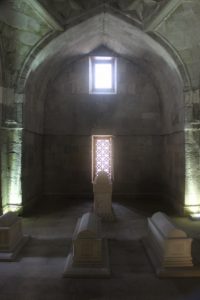 inside, the various graves of the shahs

Which is the same for the old town; once we got used to it, it proved to be so small, really, that we managed to find our way around almost effortlessly. Including the way back to our hotel.

next: several sights around Baku 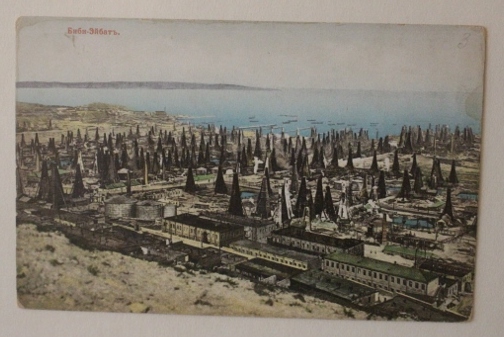 and a picture in the paalace museum, showing that some time ago Baku was already an important oil province

One Response to 04. Old Baku