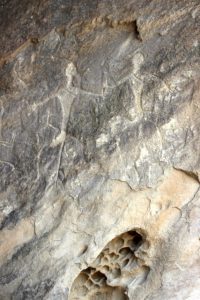 petroglyphs in Qobustan, a site north of Baku

There are lots of mildly attractive to somewhat disappointing attractions around Baku, but none so evocative as the oil fields.

Even Baku, city almost entirely surrounded by desert, has its attractions outside town. And the Baku tour operators have latched on to that, by designing a wide range of tours, all doing roughly the same. Including things we were not necessarily that interested in, and in any case, I hate tours. But renting a taxi for the day, in Baku, is not a good idea, either, because the drivers don’t always know their way to the sights, and cannot count on the support of local taxi drivers, who have nothing to gain by helping their, in their eyes, unfair competitors. So we had already resigned to a public transport program and local taxis – which is in any case more often than not an adventure in itself, when we walked past the office of BagBaku, a local organisation I had heard of just hours earlier. They support foreigners in general, arrange tours, too, and – most importantly -, have cars with drivers available. Which they could arrange at short notice, too, like, tomorrow morning. 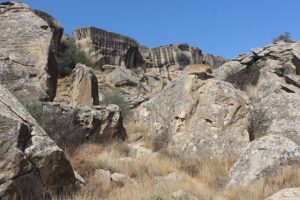 the country side where the Qobustan petroglyphs have been found

The number one must-see attraction outside Baku, according to all guidebooks and all tour operators, are the petroglyphs at Qobustan. Loyal followers of our travelogues know of my fascination with petroglyphs (and geoglyphs and rock paintings), so no surprise then, that this was high on our list. But as soon as we got near the Azerbaijan National Heritage Artistic Preserve, as the location is called, our enthusiasm got tempered somewhat. Lots of big tourist busses, and even more small tourist vans, choked the large parking area. Unfortunately, it turned out to be European Universal Museum Day, or something like that, and entry was free. For everybody. 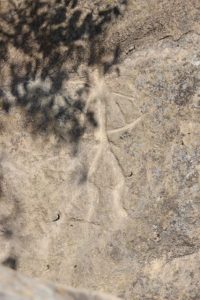 another etching of a man, with spiky arms and legs 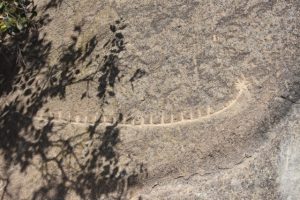 a reed boat, or so goes the interpretation

A roped-off walking path, laid with large garden centre-type tiles, was leading us, together with maybe a hundred or more others, past the various petroglyphs, which were, to say the least, not overwhelmingly spectacular. We have seen better, much better, and with far fewer people. Apparently, we missed the two best scenes, or maybe they had been closed off to protect them from the masses, but I don’t think that would have altered our view significantly. The nearby museum makes an honourable attempt to put things in perspective, but much of it is open to speculation. 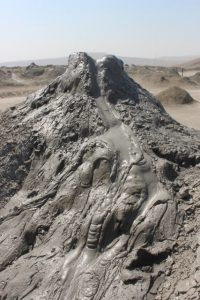 the mud flowing out very slowly 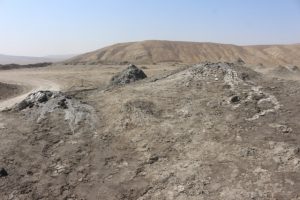 a field full of mud volcanoes 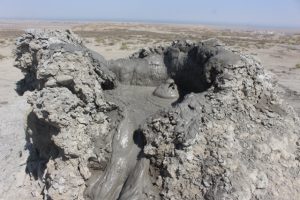 and the occasional bubble, called by some ‘geological flatulence’

Another twenty minutes on, over a slightly rough, unsurfaced road – inaccessible for the big busses! – is one of those weird, totally unexpected natural phenomena, a series of mud volcanos in the middle of the desert. Don’t expect huge cones from where the mud comes flowing out, they are actually pretty small; but active, bubbling, and occasionally, spitting a fair amount of mud around. Funny to watch, if you have never seen this before. Somebody coined the term ‘geological flatulence’. Incidentally, Azerbaijan has, with 350, the most mud volcanoes of any country in the world – but have you seen one, you have seen them all, I think. 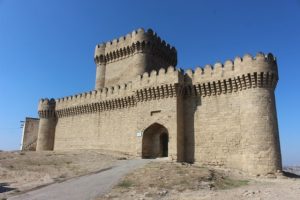 Our third ‘sight’ is on almost none of the official tour itineraries. Baku is located on a peninsula, the Abserom Peninsula, and there are a few things to see, officially. Some continuously burning natural gas flames, a Zoroastrian fire temple, a castle, and best of all, a shrine were people have glass bottles crashed onto their heads to cure them from nervousness, apparently. Would have loved to see that, but we had to make a choice because of time limitations. 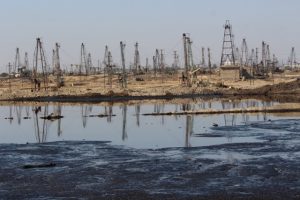 an army of closely spaced derricks on an oil field south of Baku, close to Ramana Castle 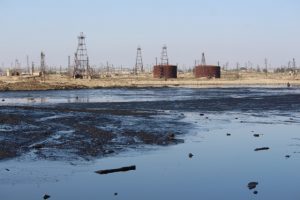 same area, with a bit of a ‘crude oil lake’ in the forefront 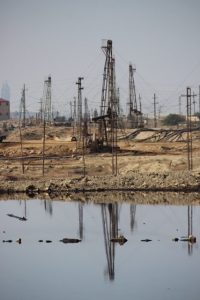 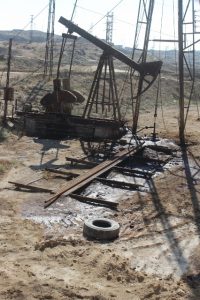 close up of a nodding donkey oil pump, and the spillage 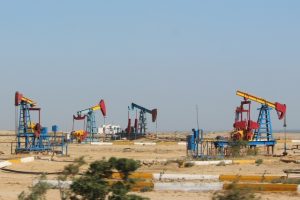 some of the knodding donkeys are newer, more colourfull

So we headed for the Ramana Castle, another well restored, but tiny little tower, where we dutifully climbed to the top for the view. And that view was the real reason for coming this way: from the base of the castle extends one of Baku’s oldest oil fields, covered by hundreds, if not thousands, of derricks and nodding donkeys slowly pumping up oil. And spilling it, for sure. Everywhere are ponds with oil remnants sticking to the rims. Albania revisited, but then bigger. The equipment is a mixture of very old, and somewhat newer, if only because the pumps have been painted in brighter colours. But what they do remains the same: pumping oil and spilling some in the process. It is an impressive sight. One that is not highlighted in any of the standard tours, but one I wouldn’t like to have missed. 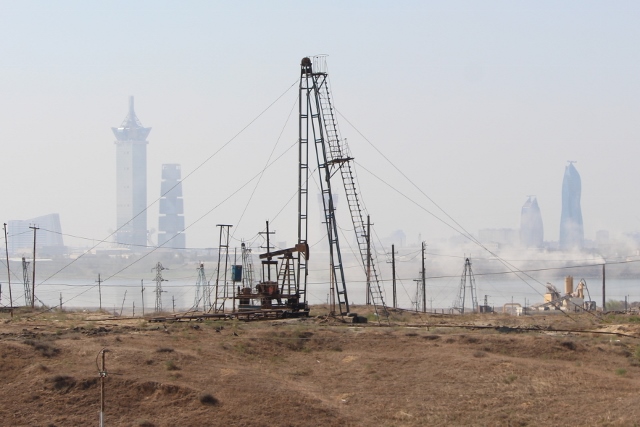 derrick and donkey, with unmistakably Baku in the back

In fact, oil is everywhere around Baku. The field near the castle is not alone, we see nodding donkeys in what looks like people’s back gardens. And driving outside town, the desert contains hundreds of pumps; work continues, and modern rigs are drilling ever more wells. Offshore, too, we spot the platforms, and the rigs. There is even a dumping ground for old, no-longer-used jack-up rigs, along the coast, which provides an eerie picture of industrial waste. 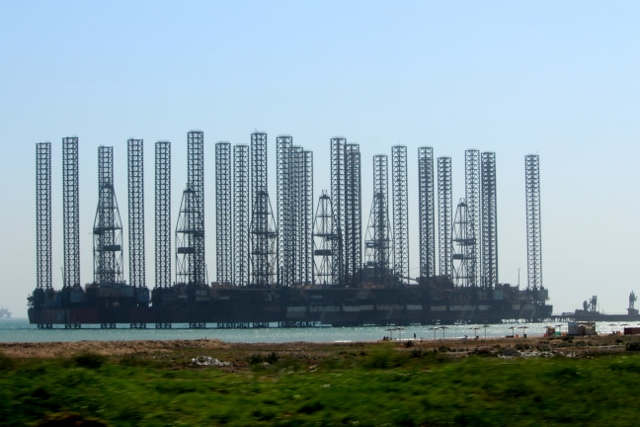 a range of jack-up platforms discarded along the Caspian coast 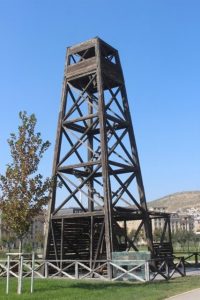 the derrick of the – or so it is claimed – first commercial oil well, drilled in Azerbaijan 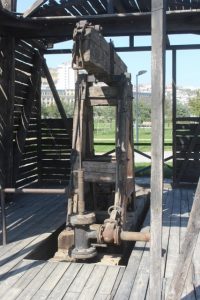 a wooden noddding donkey is part of the outfit

Because of my obvious interest in oil our BagBaku driver takes us at the end of the day also to the world’s first ever commercial oil well. It turns out that this one was drilled near Baku, in 1876, with the help of a wooden derrick that is now proudly displayed, just south of Baku. Whether it was also drilled right here, the story doesn’t tell. But the fact that it is revered – we see people coming here to have their picture taken in front of the derrick – says enough about the link between oil and Azerbaijan.

next: to Quba and picturesque Xinaliq 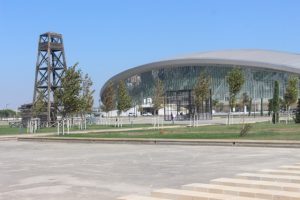 the first oil well, against the background of yet another of Baku’s futuristic sports facilities 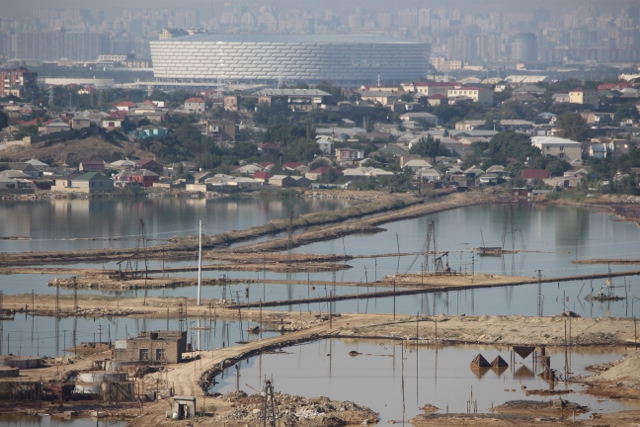 another ‘unmistakably Baku’: this is the Olympic Stadium that I failed to show in an earlier entry, taken from Ramana Castle; what’s in between is your best guess