the double minaret of the Qarabaghlar complex, one of the few slightly authentic remians in Nakhchivan Autonomous Republic

Outside the capital, we visit a number of tourist attractions, varying from dilapidating to recently reconstructed, whilst enjoying the beautiful countryside.

Of course, there is more to Nakhchivan than only its capital. The Autonomous Region within the Republic of Azerbaijan has some 450,000 inhabitants, of which only 75,000 live in the city. So we arrange a car to explore more of it. Just a few of the more easily reachable sites, many others require four-wheel drive and lots of time, apparently.

Any tour starts with a visit to Alinja Castle, perhaps some 2000 years old, but certainly a force to be reckoned with in the Middle Ages, according to Medieval travellers and writes. 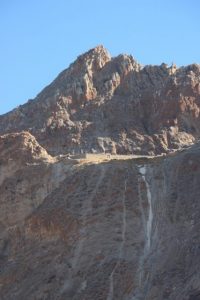 the Alinja castle, really high up the mountain 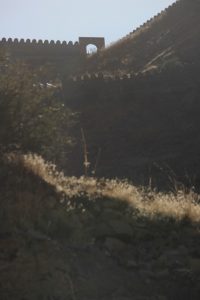 the approach to the castle

We have high hopes, this is the number one tourist attraction in Nakhchivan, located high up a mountain. It can only be reached by steps, more than 1700 of them, which we dutifully take. But from a distance we already notice some new constructions, and indeed, once up, and inside the remains of the castle, it is clear that Alinja has also been hit by Decree of the Chairman of the Supreme Maljis of the Nakhchivan Autonomous Republic. It is sometimes called the Machu Picchu of Azerbaijan, but then without the people. That last assessment is correct, there is nobody except us. But Machu Picchu? Hmmm. We weren’t that impressed by Machu Picchu earlier this year, but at the time we didn’t yet compare it to Alinja Castle. 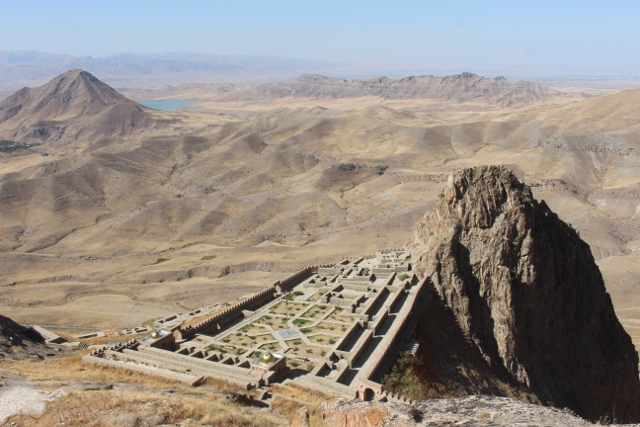 but the equivalent of Machu Picchu? Nice views, though 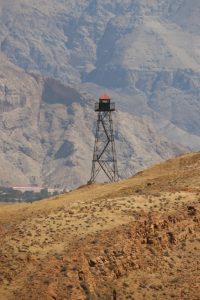 the Azerbaijani watch tower on the border with Iran

From Alinja we drove to Ordubad, because of its ancient character named as the state historical-architectural reserve. The road to Ordubad is pleasant enough, a mostly four-lane motorway with views of rugged mountains to the north and Iran to the south. I suddenly realise that we were on the other side of the border, some three years ago, staring into Azerbaijan. The same watch towers, but now from the other side. 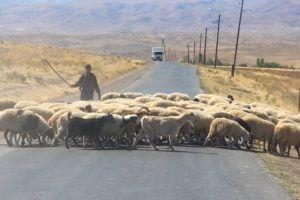 on the way, here too, the occasional sheep crossing

Our driver gets stopped a few times, by police. Every time again he gets out, and is back within seconds. He claims that he was asked about whether he had insurance, but obviously, he didn’t have to proof it. He must be the son of an important person here. Or just secret service, keeping an eye on the foreigner. Why was it again that the hotel kind of insisted we take him as our driver? Having said so, he is very nice guy, speaks excellent English (and that for a driver, although he says he is also a teacher; but it is Monday, no school today?), friendly, funny, a very pleasant companion on the trip. 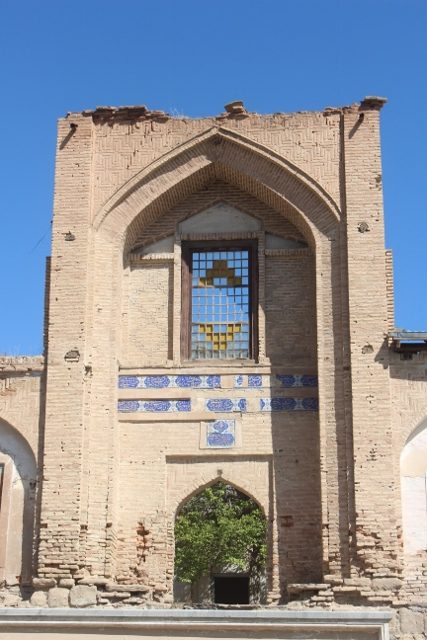 the remains of an old Ordubad madrasse, later silk factory: at least authentic! 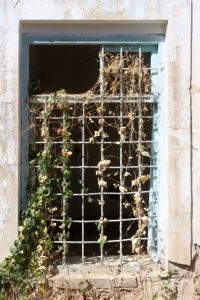 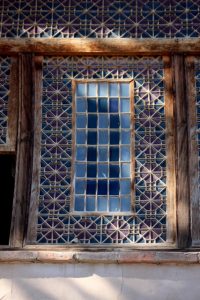 one of the windows of the mosque 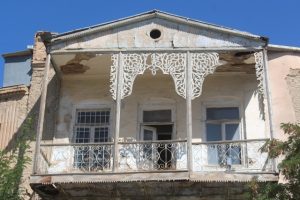 one of the few remaining balconied houses in Ordubad, also authentic

But in Ordubad, after all the second most important tourist attraction outside Nakhchivan, he does not really know his way around. The good news is that Ordubad has escaped the Chairman’s decrees. The bad news is that it is actually not particularly interesting. We skip the museum, having seen too many of those already: a bit of copper work, clay oil lamps, some broken pottery, and a carpet and a saddle bag thrown in for good measure. The old madrasse, which apparently was turned into a famous silk factory under Soviet rule, has still some nice tiles, and a courtyard, but there is not much left – although it is way more authentic than any of the other monuments we have seen so far. The mosque is old, but not specifically beautiful. So here and there an old wooden balcony turns up, close to collapsing – that is the price to pay for not being subject to the Chairman’s decrees. And the houses, well, they are built of mud and pebbles, no idea how old they are. But as historical-architectural reserve, it disappoints a bit. 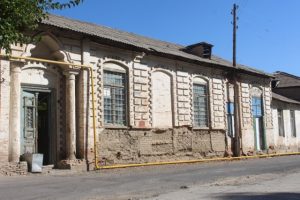 another no doubt old building, although difficult to say how old 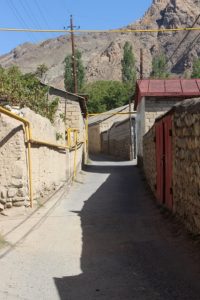 street in the old quarter of Ordubad, with the gas network so familiar of other former Soviet republics 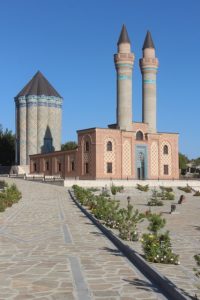 the Qarabaghlar complex with mosque and tomb 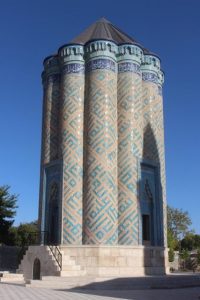 the tomb – although it remains unclear who is burried here

It is getting late, so we wizz over the main highway of Nakhchivan, via the ringroad around the capital, to another touristic highlight, ‘a grandiose architectural sample of the Middle Ages’ and ‘one of the pearls of Eastern architecture’ (the brochure): the double minaret mosque and tomb at Qarabaghlar. And although this, too, was rebuilt by Decree of the Chairman of the Supreme Maljis of the Nakhchivan Autonomous Republic, there are actually some original traces left; both the minarets and the outside of the tomb seem pretty authentic. After two days of viewing ruthless reconstruction, any authentic piece is welcome. 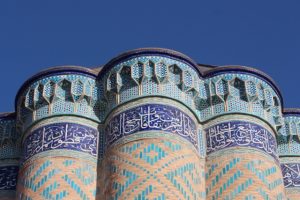 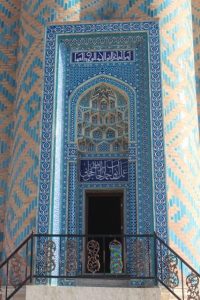 one of the tiled doorways 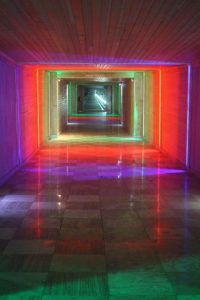 entrance to the salt mine shaft, now a medical centre 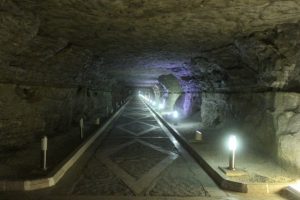 the mine shaft adjusted for patients

In Duzdag an old salt mine has been turned into a health centre, curing asthma and other long diseases. Just to make sure, a Russian historian – there he is again – has established that this was actually the oldest salt mine in the world. Perhaps. The mine corridor, which runs a couple of hundred meters more or less horizontally into the mountain, has been prepared for receiving visitors, shall we say. Fancy lighting, and the occasional side cabin. Except that they don’t expect people taller than, say, 1,90 m high. I survive, just, without banging my head against the ceiling. Curiously, this is the only place where we feel distinctly unwelcome, nobody smiles, nobody says hello; I could just imagine that this may have been how things were under Soviet rule. 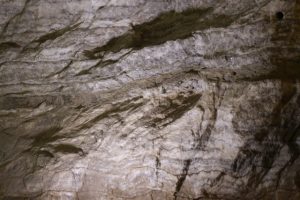 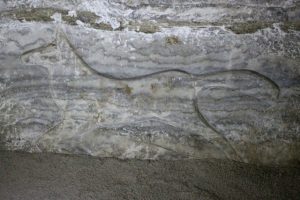 and some more recently added structures, too 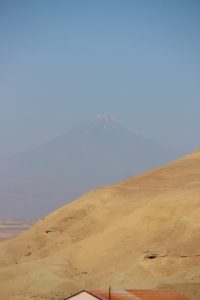 very vague, I know, but that is Mount Ararat in the distance

Outside again, we spot a distant, really high mountain: Mount Ararat, and cloudless – but very far away. The picture from the first entry to this blog is actually better. And then we wizz back again, four lane empty highway to Nakhchivan city, to catch our plane back to Baku.

What can I say about our experience in Nakhchivan? Really nice people – except for the Duzdag salt hospital. In restaurants, waiters would call their English-speaking friends, so they could help us order our food (which was, of course, unnecessary, we manage quite well, thank you very much, but the gesture was so nice). Everybody with a smile, everybody willing to help. And no negative word about their exclave: no, there is no corruption here (never mind the overall fear for everything that looks like police), and yes, everybody has work.

And all this impressive infrastructure: for nothing, for nobody, it seems. I mentioned the empty six lane avenues, the empty buses, the endlessly waiting taxis. I counted seven people in the carpet museum, all staff, but we were the only visitors, and after we left they switched off the lights again. I don’t think they get more than one tourist visit per week. Our hotel is more than half empty, the hotel near the salt mine looks entirely empty, and so are the treatment rooms for asthma patients. All the construction, all the Decrees. The roses in the parks and along the roads. Yet someone has to pay for this, I don’t believe that Nakhchivan produces enough to cater for itself. Smuggling to and from Iran, or Turkey, can’t be that lucrative either. Handouts from the centre, perhaps? Keep the people happy in the name of Azerbaijani unity, even if the territory in question lies way outside the mainland. The cost of an exclave. Or maybe it helps that Hayder Aliyev was born here. 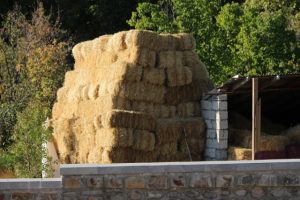 But I say it again: the monuments may have been disappointing, yet, the travel experience is one we would not want to have missed. No regrets coming here!

next: back to the main body of Azerbaijan, and to Sheki. 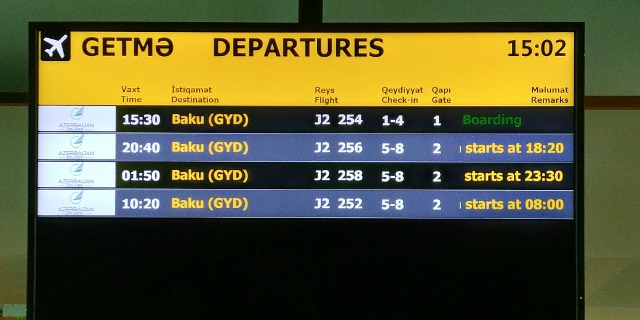 these are all the flights leaving from Nakhchivan International Airport, in a day