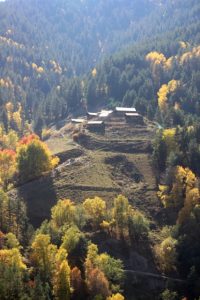 hill-top village in Tusheti, one of the most remote areas in Georgia

To get to one of the most remote areas of Georgia, Tusheti, we undertake a gruelling drive, and back, but the spectacular mountain scenery in autumn is worth every minute of it.

Several parts of northern Georgia are located north of the Caucasus watershed. Thanks to the Georgian Military Highway the Kazbegi area, around the north-flowing Tegri River, is perhaps the most accessible of those valleys. Tusheti is the remotest, by far. Bordering unruly Chechnya and Dagastan, in Russia, this long forgotten region has been self-sufficient for centuries, growing their own food, and enough of it to survive the long winters. Which, apparently, gave them the idea to declare independence from the Soviet Union in the 1940s; big mistake, of course, in between fighting the Germans the Red Army found time to crush this uprising and send the men to the Gulag, the women and children elsewhere. Yet, it was not until 1982 that the first, and so far only road into the area opened, and connected Tusheti with the outside world. 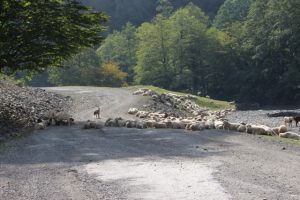 sheep occupying the road along the Alazani River 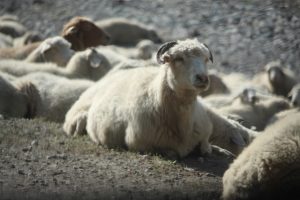 no sense of urgency the beginning of the road, mostly flat 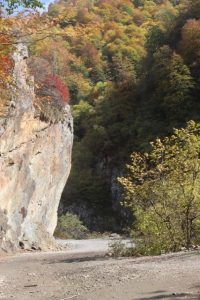 although rock has already been hewn away to make space 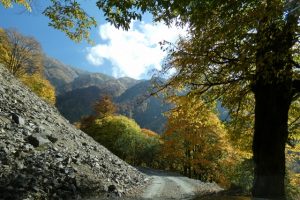 slowly rising and creating a view

Well, what is ‘connected’? The first 5 kms of road are tarmac, the next 65 are dirt road, of poor to very poor quality, full of holes, 4×4 country only. It easily takes 4 to 5 hours to reach Omalo, our target for the next few days. The first part runs along the Alazani River, but soon – well, relatively soon, it takes an hour to negotiate the first 5-10 km of unsurfaced bumpy road, the deep holes – soon, the road begins to rise, via long-drawn-out hairpin after hairpins. For kilometres on end the mountain is on one side, the abyss on the other, and in between is a narrow ridge where two cars can hardly pass. Definitely the type of road that you want to keep your eyes on all the time, just in case. Which is really difficult, because the scenery we pass on the way is absolutely spectacular. Not just along the river, and the dense forest at the bottom – which is taking all the possible autumn colours, from yellow to dark red -, but even more so on the mountain slopes, where we have uninterrupted views over the valley below, the most improbably waterfalls and cascades, the forests on the opposite slopes – once again a riot of colours -, and the higher mountains, devoid of trees altogether. We stop often, to get out, take lots of photographs – there is almost no traffic. (I later learned that this road also featured in the BBC series ‘Most Dangerous Roads in the World’ – perhaps that’s why there are so few other cars.) 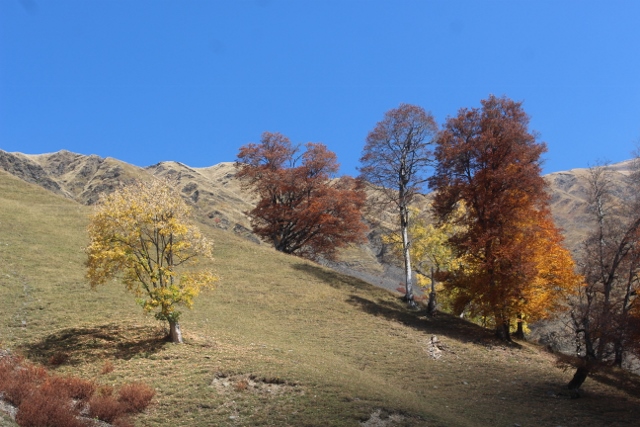 autumn colours on a spectacular day 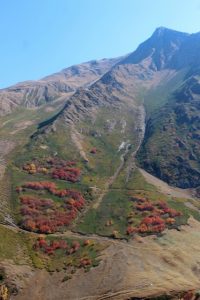 the higher we come, the less vegetation – but still in colour 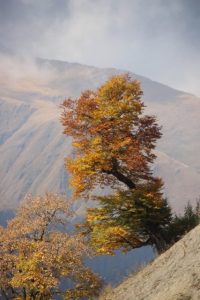 and what about this one, holding on to the slope 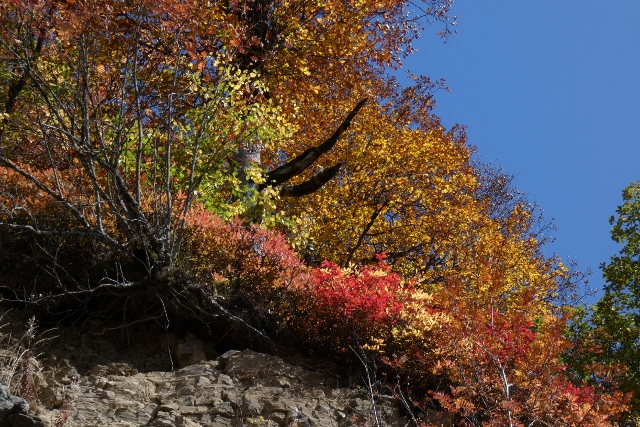 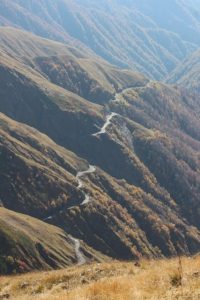 part of the road, mountain on one side and the abyss on the other 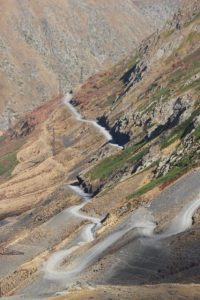 no room for error here, either 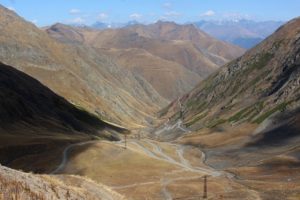 the view from the pass down

The highest point on the road is the Abano Pass (sometimes called Torha Pass), with 2865 meters the highest drivable pass in the entire Caucasus. And then it goes down again, same steep slope, same nerve-wrecking narrow road, hairpins and abysses. Same fabulous scenery, except that now we also have views over some of the snow-capped peaks in the distance. At the bottom, another river awaits us, but this time the valley is much narrower, gorge-like almost – in some places the road has even been hewed out from under the rocks, from which water splashes on the car. Parts don’t see much sunshine at all, and have big puddles; it is difficult to assess how deep they are. Occasionally, we see a plug of ice, left in the river – a remnant from the winter, and it is now already early October! The road isn’t much better here, often going across bare stone, thinly laminated schists. And yes, we do have a flat tyre halfway, which only makes us more nervous, as we only have one spare one. After another hour, or so, we begin to climb again, the final ascent to the inhabited world of Tusheti. We haven’t seen any houses for a long time, except for the occasional roads department station and the ranger’s office (we have by now entered the Tusheti National Park), but now the first villages, clinging against the mountain, begin to appear. Adding another element to the photogenic environment. And then, finally, after five hours drive to cover the 70 kilometers, we reach Omalo, Tusheti’s “capital” village. Some 30-40 houses altogether, no more. Which, by now have been mostly abandoned. 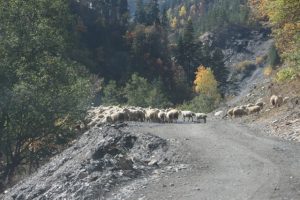 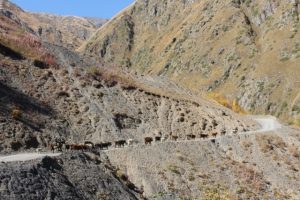 cows are being led down to the valley, away from Tusheti 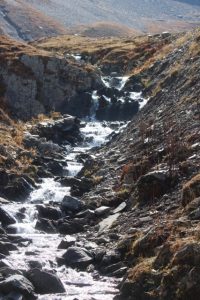 close to the pass, a little stream, heading north 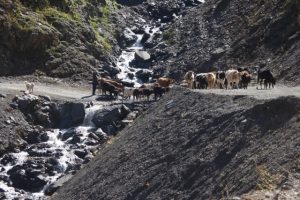 more cows on the way down 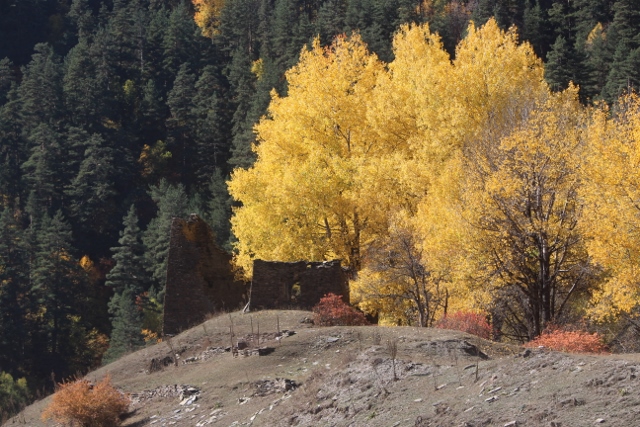 a watch tower under the trees 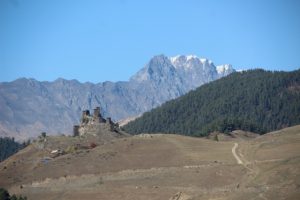 another tower complex, typical for this area 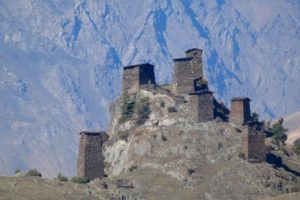 close-up, all towers inter-connected, I think 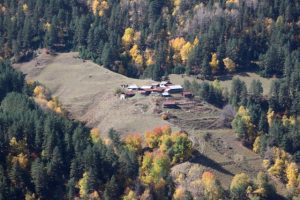 one of the first villages near Omalo 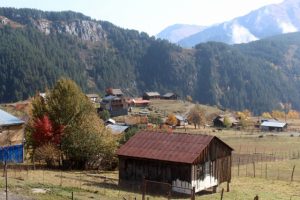 the “capital” of Tusheti, Omalo 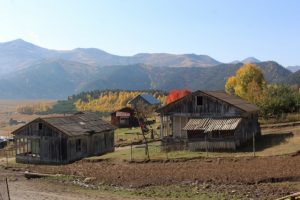 and the other half of the village

We find ourselves the only guesthouse left, the only one still open. We are not only the only tourists, it transpires that almost the entire population of Omalo, of all of Tusheti, leaves for towns and villages at much lower levels during the winter, where they often have their own houses, or family. And indeed, during our ascent we had to slow down – if you can call it that way, from our snail-pace – for oncoming herds of cattle and sheep, accompanied by shepherds on foot, or on horseback. The animals, too, are being brought down for the winter. The road is only open from June to mid-October, afterwards rain and snow make passing impossible. Only access to Tusheti then is by monthly helicopter. Our landlady jokes that her 81-year-old, 1.50 m tall neighbour, who she affectionately calls Babushka, and who is one of the very few people to stay put during the winter, doesn’t reach above the snow during most of that time. She herself is closing up shop in a week, or so. Lucky we! It would have been really disappointing to finally come all the way to find everything abandoned already. We install ourselves in front of the guesthouse, with a hot tea, and later some home-made wine, and enjoy the rest of the afternoon. We could spend some time here, perhaps. 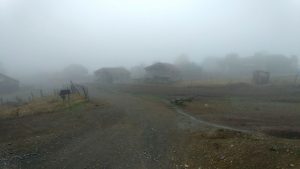 the next morning, encapsulated by dense fog but after a while in clears, and the next herd takes off 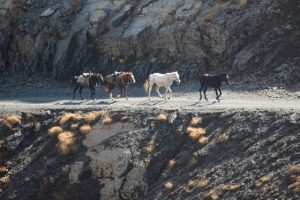 horses, too, abandon the highlands

Or not so lucky? Although it has been a spectacularly clear day all day, not a single cloud, we wake up in the middle of the night, from the thunder and the rain. And not just a little rain. How on earth are we going to get back to the world of the living again? We both don’t sleep well, that night, from the noise and from the worries. But the next morning our host laughs away our concerns. This was just a small shower, the real rain will be coming in a few days, or a week. And no, the road will be no problem. Once the clouds have cleared – the entire valley is covered in clouds when we wake up – we will have no problem driving down again. Hmmm. We had thought of staying a day, enjoy the mountains here, but we are both not entirely convinced anymore. What if the real rain comes tonight? We wait till the clouds clear and drive back down. Another five hours. A bit muddier than yesterday, but our host was right: the road was no problem. Well, not much more of a problem than the day before. 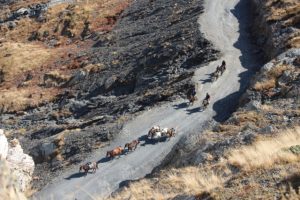 the other traffic on the road, on our return

But what a fabulous drive it was, once again! What a beautiful area, what a spectacular scenery. And no better time to do this than in autumn, with its fabulous colours. Just before the autumn rains. 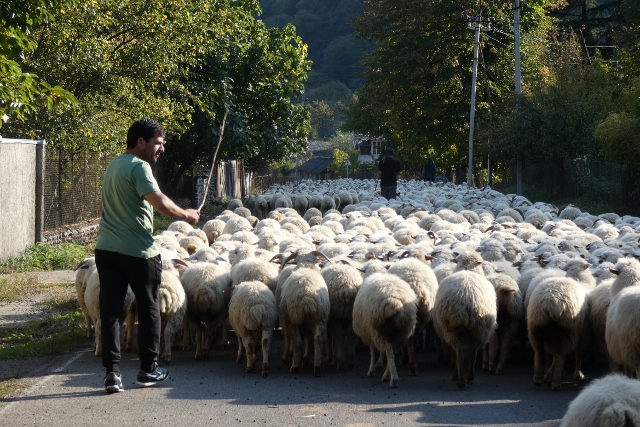 and even the few kilometers of tarmac are covered with animals