haphazard tourist at the Georgian border

Our first contact with Georgia is somewhat disappointing, but things are getting better.

Our first confrontation with Georgia is not good. Perhaps we were spoilt by the friendliness of the Azerbaijanis. Or perhaps, land border crossings are always a bit of a hit and miss. Entering the country was no problem, passport stamped, no interest in our luggage. No smile either, no ‘welcome to Georgia’ – where we had so many times a, smiling, ‘welcome to Azerbaijan’ in the past two weeks. Immediately across the border, two vultures descended upon us: taxi drivers. Again, as in Sheki, we were not in the strongest of negotiating positions, as they obviously worked together. But there was also a bus. Which was prepared to take us, for a far more reasonable amount of money, to the next village, Lagodekhi. Until the taxi vultures said something to the bus driver, who from then on refused us as passengers, and drove off half-empty. 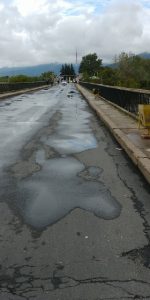 the bridge between Azerbaijan and Georgia 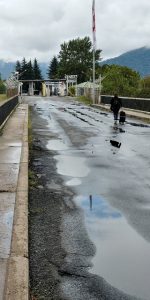 In the end we caught another taxi driver, obviously from another mafia, who took us, for the same obscene amount, to the village. Where he loudly claimed that there were no more busses, so we had to take a taxi to Tbilisi. He almost declined to offload our luggage, we had no other option anyhow, didn’t we? We did. There was a bus, half an hour later, which gave us the opportunity to eat something, have a coffee, and check hotels in Tbilisi.

The bus driver spoke three words of German, which he used to bully us into our seats, which were very tight. We wanted to change; after all, there were plenty of empty seats available, but ‘nein, nummer eins und zwei!!’. The next two-and-a-half hours we were folded up in our chairs, secretly thinking back to our taxi driver.

We didn’t check on hotels well enough. The one we had chosen turned out to be in an impossible location, and had a shower which splashed the entire bathroom, but didn’t drain properly. The only English-language capability of the old lady, the only staff present, was ‘sorry’, which she repeated quite a few annoying times. The next morning, breakfast was only served from 9 am onwards, much too late of course – another old lady, the morning shift, apologised profusely: ‘sorry, sorry, sorry’. When we asked her to call a taxi, the taxi refused to come, because it was the day of the Tbilisi marathon, and half the city was blocked off.

As I said, not a good start.

But not much later we found a comfortable hotel on Rustaveli Avenue, the usually busy and car-clogged main thoroughfare of Tbilisi, which was entirely traffic-free this morning. Because of the marathon. We even enjoyed a sumptuous breakfast on a pavement terrace.

next: more about Tbilisi. a rare view of Rustaveli Avenue, Tbilisi’s main throughfare, empty because of the marathon 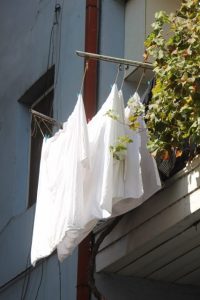 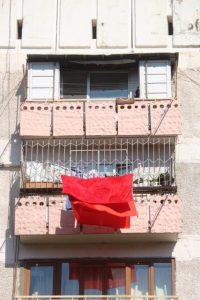 and laundry in red, the Georgian colours