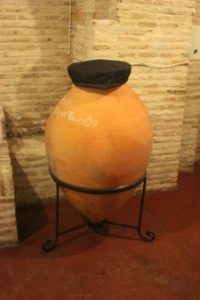 a qvevri, a traditional wine container, at the winery Chateau Mukhrani

We get our first introduction in Georgian wine, a somewhat mixed experience, but made good by some excellent wines.

Not entirely coincidentally, our interest in Georgia – the reason we are here – was at least in part linked to Georgia’s reputation as a wine producing country. Archaeological evidence points to the first wine making here no less than 8000 years ago, which has opportunistic entrepreneurs claiming Georgia as the land of 8000 vintages. Right! Between Muslim invaders, Genghis Khan, Tamerlane and phylloxera I am sure a couple of years have been skipped, and during the Soviet years quantity was preferred over quality, but today’s Georgian wine is generally accepted as excellent. And that has to be sampled. 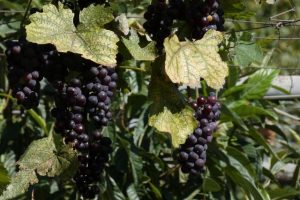 grapes, ready to be picked in October

Most wine comes from the Katheti Region, in the east of the country, but in Kartli, the traditional heart of Georgia, we found a few addresses, too. There is even a genuine wine route! First on our list is the Iago winery, apparently a small scale, kind of homely, family-style wine maker. Homely? A large restaurant caters for a huge group of visitors, no doubt belonging to the bus parked outside. For us there is no place. No reservation, you know. And tasting? Difficult, really difficult. In the end, a small table is set up next to the table tennis table under a temporary roof, somewhere in the back, and a surly woman tells us “two wines and chacha, no more”. Chacha is a kind of local cognac, not of immediate interest to us. You know, leave it, we’ll go somewhere else. 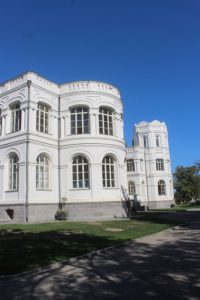 the Chateau itself, almost finished 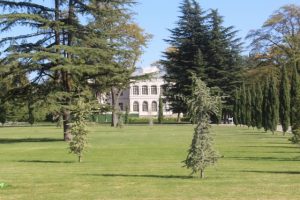 the approach to Chateau Mukhrani 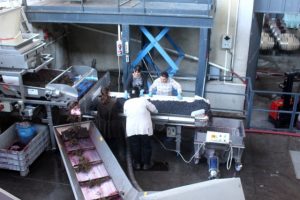 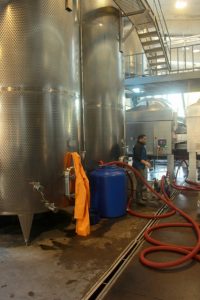 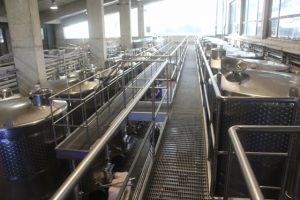 as you will find in any modern winery 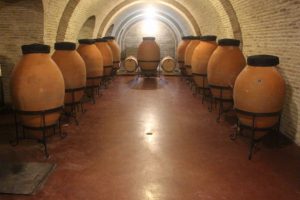 a room full of qveris 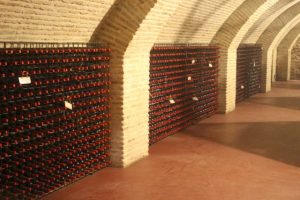 Which then was Chateau Mukhrani. Really, a chateau! The story goes that one of the family that owns the land here since the 16th Century was a real Francophile, and after having visited France in the 1870s brought in the architects to build a real chateau, and brought in the vinologists to establish a European way of wine making. And the logo proudly refers to 1878 as the year that the first bottle was filled at the chateau. In reality the winery, which had almost entirely collapsed, was recently re-established by a group of investors, who started wine producing in 2007, and have almost completed the recreation of the original chateau, which was built up from the bottom again. What counts is that here we are welcome, for a late lunch in the garden, and a subsequent tour of the winery – in full swing, as it was harvest time – including the tasting of a few of the wines, in a stylish tasting room without table tennis table. Where we are introduced to three of the Mukhrani wines, one of which we had already sampled during lunch. Could we replace that one for another, perhaps? “No, sorry, this is the package, cannot change”. The old Soviet inflexibility has not yet entirely died out, it seems, not even in the younger generation. 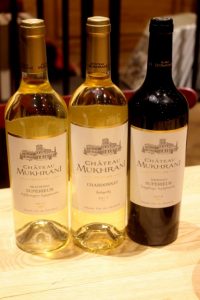 and the three bottles for tasting 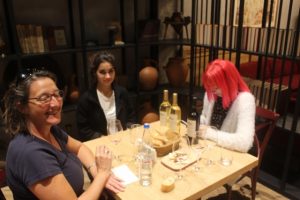 We have some of Georgia’s indigenous grape varieties, the Rhatsiteli dry white and the Saperavi, the dominant red grape – which is called black wine, here, although it looks just as red as red wine elsewhere -, and they can match any Western European grape. That is one part of our journey that does not disappoint.

And when we leave, late afternoon, we are sure of one thing: we will not make it anymore to Kazbegi, our intended target for the night.

next, finally, the Georgian Military Highway to Kazbegi.