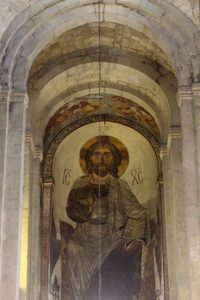 a fresco in the Sveti Tskhoveli cathedral in Mtskheta

In Georgia’s spiritual capital, Mtskheta, we get our first immersion in churches and cathedrals.

On the way to Kazbegi, a mountain village high up in the Caucasus, close to the Russian border, which we hope to reach tonight, we stop in Mtskheta – don’t worry about the impossible name, apparently it is pronounced ‘Skayta’. This is the old capital, and as many with argue, still the spiritual capital of Georgia. This, too, is where the Georgian royal family at the time, 337 AD, converted to Christianity; and this has been the seat of the Georgian Orthodox Church until the 12th Century, the days of Georgian expansion from the Black Sea to the Caspian, started by King Davit de Builder and completed by his great-grand daughter, Queen Tamar – only to be brought down by the Mongol raids of Genghis Khan in 1220. This is Kartli, now just a province of Georgia, but long one of the dominant principalities. 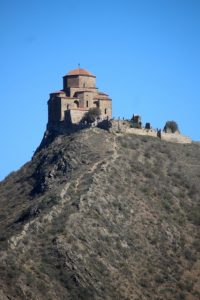 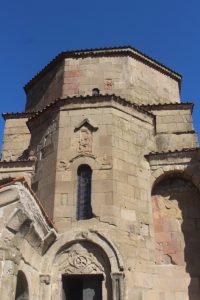 the Jvari Church in more detail 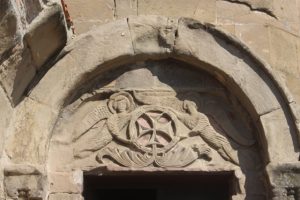 and the carvings above the main entrance

Approaching Mtskheta by car, as we did, the first church you see is the Jvari Church, built on a craggy outcrop some 150 meter above town. Great advantage, having your own car. And Google Maps! The church was originally built in the 6th Century – but this version must be from a later date. It is a very simple church, actually, not many frescos surviving inside, but its commanding position, overlooking the town and the river junction below, is impressive. 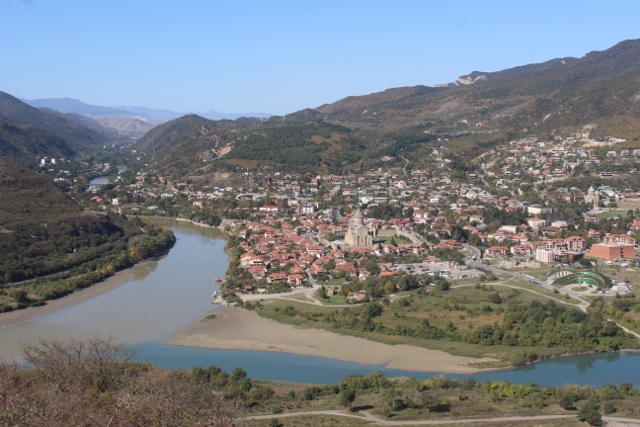 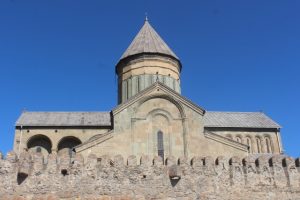 Sveti Tskhoveli cathedral in all its glory 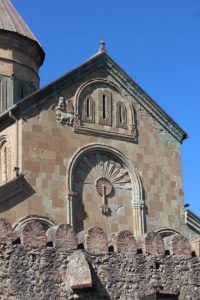 one side of the cathedral, with lots of carvings 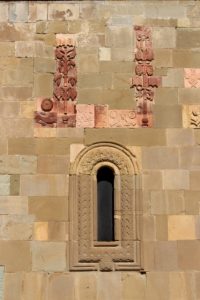 a small window, and further carvings in red 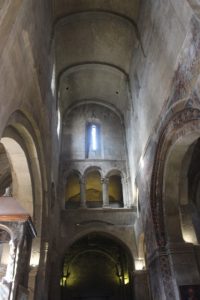 inside, an unusually tall nave 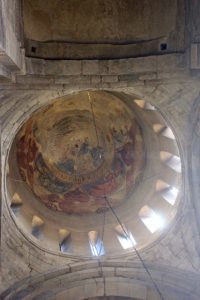 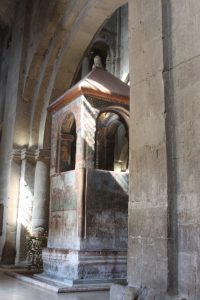 inside the cathedral, the 17th C canopy under which a robe of Christ is sais to be buried 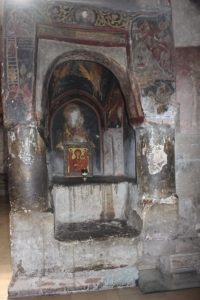 the stone throne of the Patriarch, also 17th C 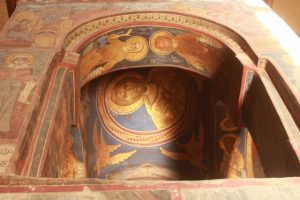 frescos and icons inside 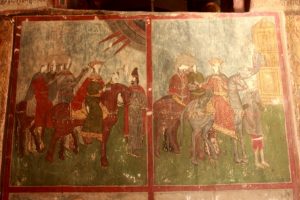 a fresco of men on horses, not easy 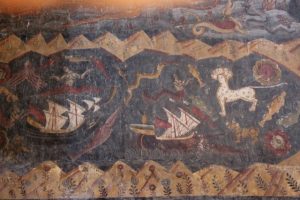 another fresco, ships at sea

The real treasure of Mtskheta is the Sveti Tskhoveli cathedral, in the centre of town. Apparently, the first church here was built in the 4th Century, of wood. Good luck to you! The first stone church dates from 575, and the current building, built around 1020, claims to incorporate the tiny earlier church. Could be, there is indeed a small chapel ostentatiously situated inside the cathedral, next to the patriarch’s stone throne. The frescos are 17th Century, and still quite vivid. A bit like Westminster cathedral, the important Georgians are buried here, and their tomb stones are part of the floor cover. Unfortunately, the language barrier, which extends to the for us illegible script, means I can’t work out where King Erkele II, Georgia’s last great king, who died in 1798, is buried.

Outside the cathedral, we start to appreciate one of the Georgian more unusual church characteristics, the decorations on the outside, like a carved window frame, or a cross.

The Jvari church and the Sveti cathedral have not only been discovered by us, but by many other tourists, too. Where in Tbilisi the tourists are well distributed across town, here they all congregate in one or two places. But a little outside Mtskheta we manage to find another monastery, the monastery of Shio-mghvime, at the end of a road through attractive hillside country. The monastery itself is fabulously positioned in an amphitheatre of limestone, a dramatic picture against the rocks in the back. The churches, at different levels, aren’t perhaps as impressive as the earlier ones we have seen, but the setting compensates for all of this, and the fact that far fewer people have taken the trouble to get out here. 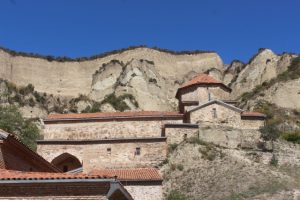 the monastery of Shio-mghvime, in front of a huge rock theatre

Where we stayed aloof of the many Georgian churches in Tbilisi, here we receive our immersion, and it does not disappoint. The last Georgian churches we saw were in Turkey, some 30 years ago, and many of them were in a poor state. In Georgia itself, they are quite spectacular, especially architecturally. I am sure these are not the last ones to admire, on this trip.

But for now we have had our share. And as it transpires, Kartli, the province, also produces some regional wines, distracting our attention from the churches. We are never going to make it to Kazbegi, tonight.