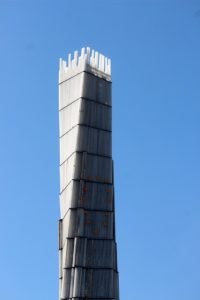 the monument in the middle of Hero’s Square in Tbilisi

Wandering through lesser-know Tbilisi we find a range of treasures, from a wonderful little museum to the massive old Soviet-style palatis.

To compensate for the travel guide-like entry on Tbilisi, let me take you on our last day in town. We had seen the main sights, didn’t have a fixed plan, just wanted to get out of the hotel – it was once more a brilliant day, bright sunshine, temperatures in the high 20’s, dry air. Instead of south-east, down Rustaveli Avenue once more, and maybe east, across the Mikvari River – the standard itinerary for Tbilisi -, we decided to make our way to the Georgian National Bank, all the way north, which apparently is housed in a beautifully constructed modern building.

Rustaveli Avenue ends in, surprise surprise, Rustaveli Square, where a large statue of the poet himself has been erected in 1937. Of course, Rustaveli was Georgian, but he wrote in many languages, and especially in Iran he is equally, if not more, revered: we have come across many Rustaveli Squares long before we got to Georgia. 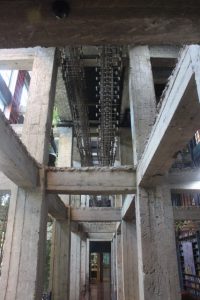 the designer interior of the Stamba Hotel 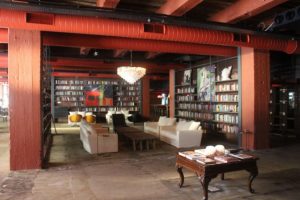 and the lounge lined with bookshelves

Just a few hundred meters further, we notice a building with bare concrete pillars inside, as if it hadn’t been finished. Turns out to be a hotel, the Stamba hotel; the unfinished pillars are part of the interior design, which is complemented by plants and trees that grow from the basement up. And by walls full of bookshelves, the introduction to the well-stocked bookshop which is also part of the hotel. They are particularly well sorted on art books, one of which is about Elena Akhvlediani, a 20th Century Georgian painter, who spent time in Paris in the 1920s. I recognise the name from one of the guide books, which recommends the museum dedicated to her, in her old house. Which turns out to be not too far away.

We find the street, which is, confusingly, parallel to Akhvlediani street, and we find an open door at number 12, supposedly the museum. No sign whatsoever, but the door leads inside to old wooden stairs, to a first floor. Bolted door, bell to the right, might as well try. An old lady lets us in, apologising for her lack of English – which isn’t too bad after all, I think she just wanted to get back to her television program. The interior of the house is wonderful! Just an apartment, not so big, but warmly stuffed with paraphernalia related to Elena: her drawing table, her comfy sofa and pillows. A piano, and some 20 chairs, testify to the fact that the house-museum is also used for functions. But more importantly, the walls covered with paintings and drawings, of great variety. All painted by Elena herself. As if we had just walked into the book we had seen earlier. 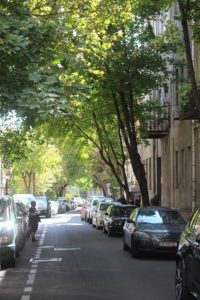 the street where the museum is 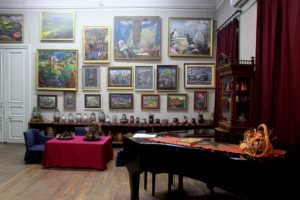 the interior of the Elena Akhvlediani museum 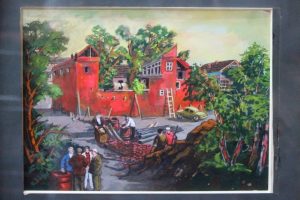 one of her paintings 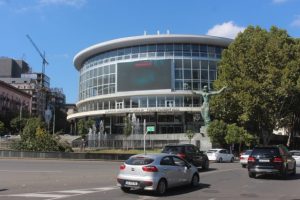 the ugly Philharmonia and equally gross sculpture of the Muse 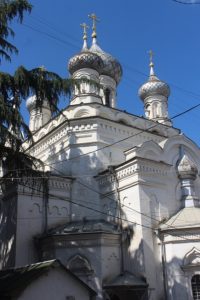 But it was a small apartment after all, so, off we went, a little later, on our quest to find the Georgian National Bank. The Philharmonia, on the way, is in fact a pretty ugly 1970s building, with a grotesque sculpture of the Muse in front. A little to the right we spot a rather unusual church, different from all those Georgian ones which are all over the town. This one has multiple bell-shaped towers: a typical Russian Orthodox church, that of Saint John the Theologian. We noticed elsewhere, too, in Tbilisi, that every religion is welcome; we have seen synagogues, a mosque, even a Zoroastrian fire temple here. 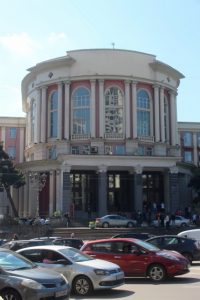 one of the university buildings 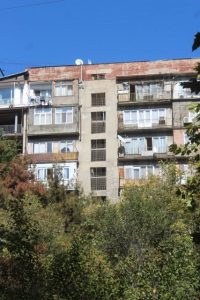 balconies looking down on a courtyard 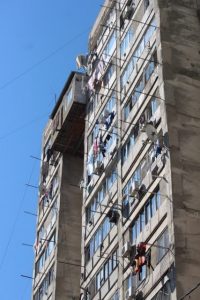 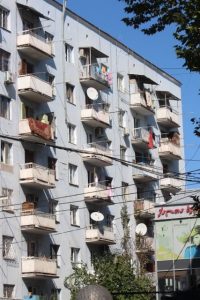 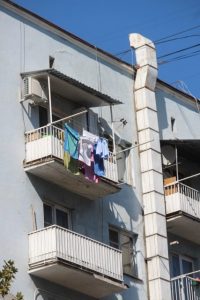 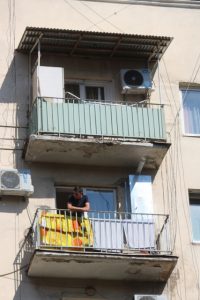 and people actually living there

Now well out of the centre, the other side of Tbilisi starts showing, its Soviet past. This is really what I came to see, these huge constructions have fascinated me already for years. Just past the Heroes’ Square, a massive collection of fly-overs, where we get lost in the myriad of underpasses – no way even I am going to cross the streets here -, there is this fabulous apartment building, 10-15 stories high, 1930s probably. An arch leads to a large courtyard with views of the balconies, the laundry, the satellite dishes.

A little further we come to the 26th of May Square, with a number of impressive, equally early-Soviet, university buildings. A whole different atmosphere, too, with young people, students, populating the pavement, and the small parks on the side. Fast-food chains provide for their needs, more than anywhere else in town.

And then, there they are again! The palatis, the cheap mono-blocks of the 1960s and 70s, with tiny apartments, balconies more often than not closed in at a later date, to create an extra room.  These are higher than usual, perhaps 10 floors, which means they may have a lift. Some have been patched up, at least on the outside, but there are plenty of them still in their old glory, complete with satellite dishes on almost every balcony that still survives. Laundry decorates many of the apartments, but corrugated iron patches show that they have had their best time and are in need of refurbishment. They will disappear, ultimately, which is best for the ones who live there. But a horrible thought for the ones who love them – to look at, don’t get me wrong (although in one of our earlier journeys to post-Soviet Republics, we actually stayed in one). 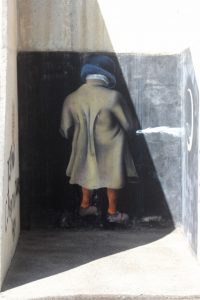 graffiti along one of the underpasses at Hero’s Square

In the meantime, it is well into the afternoon. We find a lunchroom, very local. Even better, we manage to communicate; many of the younger Georgians do speak English, and the girls behind the counter are not different. Our choosing is helped by the wide selection of wonderful dishes displayed on the counter, and we eat a great lunch. For about the price of a small starter in the tourist areas.

Never mind we never made it to the Bank.

In fact, the next day we rented a car, and drove past it. It is, indeed, a very nice modern building.

next: we actually drove to Mtskheta. 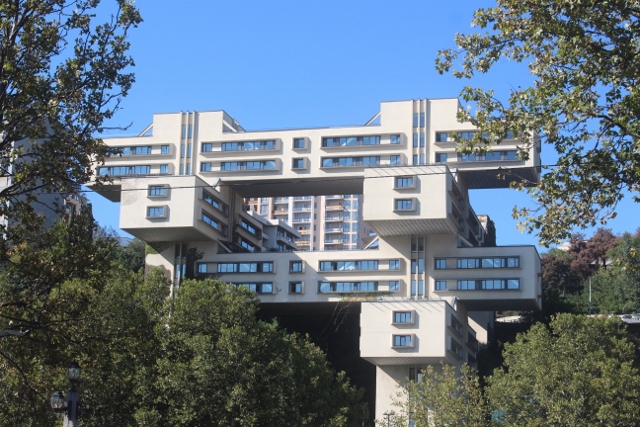 the National Bank of Georgia building