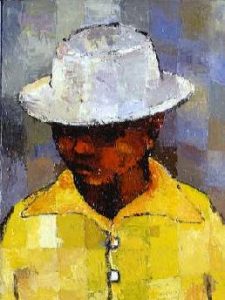 Haitian painting, a self portrait of Descollines Manes, one of my favourites and at the time just about affordable

Haiti has quite a few unique negatives, but one of its unique positives is its incredibly creative art scene, of which especially the naive paintings are world class. 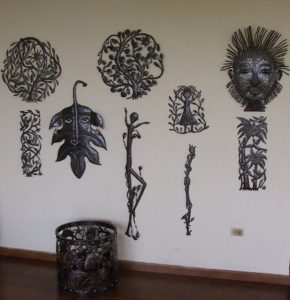 our metal collection from Croix-des-Bouquets, displayed on the terrace of our house 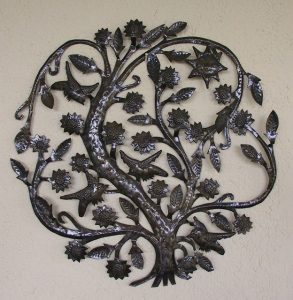 do you still recognise the cover of an oil drum? 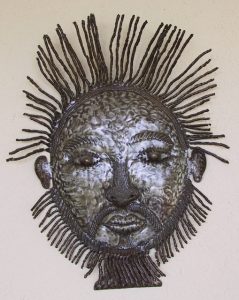 a metal mask from Croix-des-Bouquets

Croix-des-Bouquets, centre of the sugar plantations, is also the centre of Haitian metal works, an enterprising art form that relies on the availability of oil drums. Numerous artists cut up the drums and use the metal to create intricate sculptures of birds, suns, people, plants and anything else one can imagine. Many sculptures are circular, and have the conspicuous size of a drum cover, others have non-descript forms, and almost all are decorated through painstakingly detailed hammer work. The origin of the metal artistry appears to go back to the 1940s, when someone noticed the intricate metal crosses on the graves around Croix-des-Bouquets, and stimulated the iron forgers to expand their business into art.  The forgers needed little stimulation and soon a whole new art form had established itself, with a wide range of very prolific artists flooding the market. Today, in Croix-des-Bouquets itself, one can find literally thousands of pieces, varying in shape, size and quality, mostly concentrated in one neighbourhood where all the artists congregate to work, inspiring each other when there are no customers, and fighting each other with cut-throat competition as soon as a ‘blanc’ sets foot in the area. Some artists work on their own, but others have made the transfer from sheet metal into art work an efficient process that bears resemblance to a conveyer belt. The better known artists, like Serge Jolimeau and Gabriel Bien-Aime, have their ateliers next to the mass production art factories, and careful shopping around in necessary to obtain a reasonable balance between price and quality.

another one from the collection, the Rara band 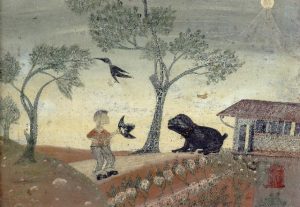 a painting by Hector Hypolite, most definetly NOT in our collection – unaffordable for mortal souls 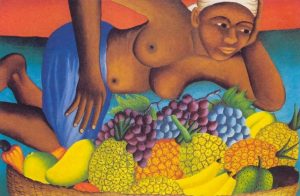 and this is by Castera Bazille, also way too expensive 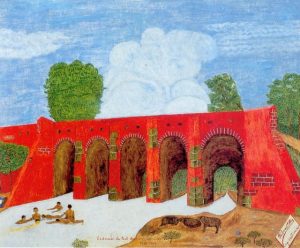 the red bridge by Philome Obin 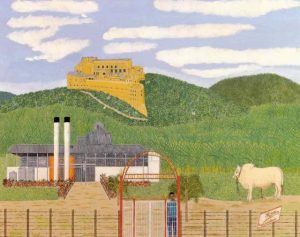 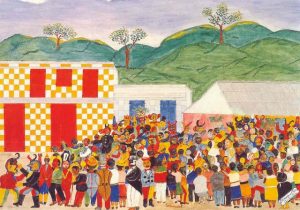 However, Haitian art is much more than the metal work alone. This is an incredibly creative country, and every region has its own speciality, from papier mache – carnival’s masks, but also a range of artefacts – in Jacmel to artfully crafted woodworks and constructions with sea shells or variously coloured sands. And to top it all, there are the paintings.

Since about the middle of the 20th Century a rich tradition of painting, mostly of the Voodoo temples, has been developed into a unique modern art style, often called naïve, or intuitive, for which Haiti is rightfully famous. Painting is of all ages, of course, but with the arrival of an American school teacher, Dewitt Peeters, in Haiti in the 1940s the art form took a flight. Peeters established the Centre d’Art in 1944, to provide a venue, and some coaching, for the many talented but untrained, and often uneducated, local painters he encountered. What became known as ‘first generation’ artists associated themselves with the Centre, among them the Godfather of Haitian painting Hector Hippolyte, himself a Voodoo priest, and others like Castor Bazile, one of my favourites and unfortunately unaffordable by now. Some of the more famous ‘first generation’ were Wilson Bigaud, Rigaud Benoit and Philome Obin, who, together with Bazile, provided the frescos for the Holy Trinity Church in Port-au-Prince, in 1966, perhaps the most important achievement of the movement. 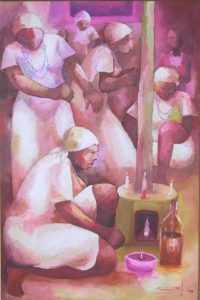 a Voodoo scene, by Dieudonne Cedor

The success of Haitian painting, internationalised by, amongst others, American poet and art critic Selden Rodman, who pushed a number of important exhibitions in the art capitals of the world, didn’t go unnoticed. Soon a ‘second generation’ emerged, and various art schools were founded elsewhere in the country, the most prominent perhaps the School of Cap-Haitien, to which younger brother Senique Obin belonged, and the School of Jacmel, in the south. But many of the collectives were merely established for stimulating a creative environment, where various artists went their own way, experimenting with subject matter and style, from extreme realistic to impressionist, from focus on still lives to markets and harbours, and to Voodoo scenes. An incredible richness, in which everybody could identify his or her own favourites.

the art market on one side of Place Boyer in Petionville 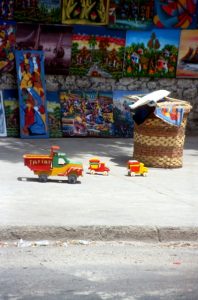 and lots of other simple art works available, too 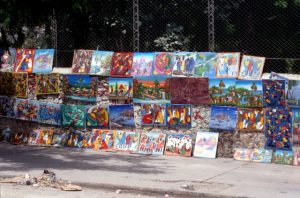 the paintings crudely attached to the fence

What also helped was the boost in tourism under the Baby Doc regime, in the late 1970s, when many American tourist came to Haiti, and bought paintings as souvenirs. Not only the recognised artists benefitted, also the many copycats, and the less talented, who painted for the many street markets that flourished. Even today – without any tourism at all – at least one side of many of the town squares is often dedicated to Haitian art, with hundreds of paintings, usually of dubious quality, stuck to a wall. At night, rather than taking them inside, they are being covered with some tarpaulin, and perhaps checked by a night watchman, although I don’t think there is a lot of theft here. 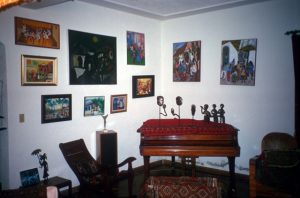 our living room in Haiti…. collecting is an illness, I know 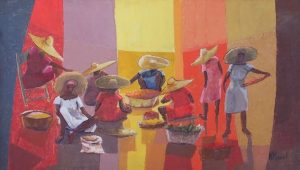 one of the present day favourites, painting by Michele Manuel 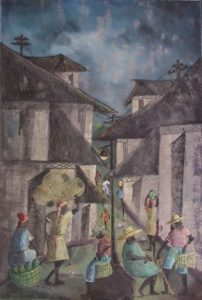 a street scene, by painter Marius – pretty rare, this guy

and another favourite, Luckner Lazard

At the other end of the scale are the art galleries of Port-au-Prince and Petionville, its upmarket suburb, which stock, and sell, the better known artists. One of the first ones to see the potential was Georges Nader, offspring of immigrants from the Middle East around the beginning of the 20th Century. On the one hand, George was business-like, and bought the paintings directly from the artists to sell for a handsome profit. But on the other hand, he also helped many aspiring artists who hadn’t established themselves yet, but who, according to George, did have the skills and the talent. Win-win, I would say: the painters, assured of an income, produced ever more paintings, and George kept on collecting them, far more than he could ever sell. He then turned his 35-room mansion into a museum, Musee Galerie d’Art Nader, which for good measure remained a gallery, too, open by appointment only. I have been inside, and I have never seen anything like it. In every room walls are hung with paintings, from top to bottom, but also on the ceiling; a beam will have been installed across the room, and paintings attached to it, on two sides. There are several rooms with ensuite bathrooms, these too are full of paintings – forget the mirror! A small kitchen: full of paintings. The toilet: full of paintings! And when I express my interest for a specific Haitian artist, a hidden backroom reveals perhaps a hundred paintings, neatly stacked in racks, of this particular painter only. Too many to choose from! 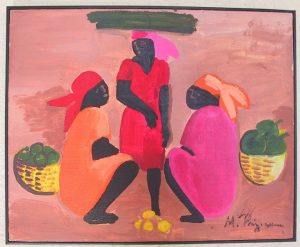 and even simpler paintings can be very attractive, powerful 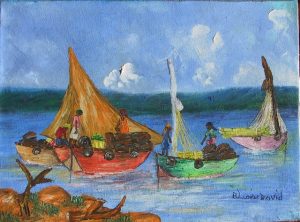 not everything in our collection comes from a gallery

George Nader transferred his love for Haitian art onto his children, who run galleries in Petionville, in Maimi and in New York. Once Khatia, one of the siblings, told me that Christmas was one of the main supply mechanisms for her gallery, as father George would give his children a couple of paintings from his own collection as a present. So January was usually the best month to go shopping!

Some of my own favourites are here. 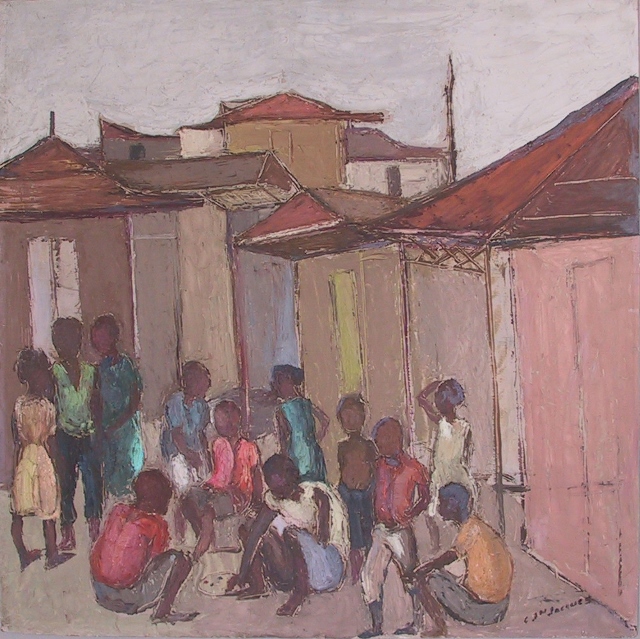