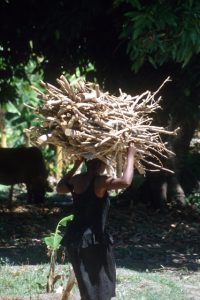 every Haitian carries a heavy burden

A few more examples, of how Haiti is slowly moving towards the abyss.

In June the pyramid schemes, sorry, the “co-operatives” did indeed collapse, but unlike Albania a few years earlier, people stayed relatively calm. OK, there were some tyre burnings, the usual expression of discontent, but nothing like a social revolution, massive protests against the government, or taking up arms and march onto the capital. All the more surprising, because the president, after all a relatively intelligent person, had publicly encouraged the masses to invest in the co-operatives to stimulate the economy. Perhaps people still believe the soothing promises of the government that they will compensate those who have lost their shirt. Official estimates are that some 15,000-20,000 people have to be reimbursed, but everybody else puts this figure closer to 100,000-200,000, or even half a million. Haitians all have relatives in the US or Canada, and what has happened is that these people, who normally remit some money each month, have now transferred their entire annual support to their family in one go, to invest against 20% interest per month. Tough luck, that money now has gone, but little chance that they will remit again, so leaving the ordinary jobless Haitian – official unemployment rate 86%!! –  without income. The real crunch, it is expected, will come next week when the schools open again. About 80% of Haitian schools are private, and charge steep school fees, and people do find the education of their children important.

Then there is the issue of Gonaives and ‘Le Cubain’. Gonaives is the fourth largest city in the country, and ‘Le Cubain’ (I cannot remember his real name) is a crook cum politician aligned with the Lavalas party, the current government’s political party, but has become more and more critical recently. For one reason or another he was arrested last May, and transferred to Port-au-Prince prison, unusual for Lavalas supporters however dodgy they are. Either before or after his arrest, this is never quite clear in Haiti, he had been sentenced to life-long prison, because somehow he had also been involved in lots of criminal activity, not unusual for the political leaders of this country. However, because of major uprisings in Gonaives after his arrest the government decided to relocate ‘Le Cubain’ back to the prison of Gonaives, where, surprise surprise, ‘Cubain’s gang, affectionately known as ‘L’Armee Canibales’ (does this need translation?) liberated their leader early August, together with 159 real criminals (or should I say other criminals?). During the attack on the prison the police and the prison guards were simply outgunned, the ‘Armee’ having much more firepower, and much heavier guns than the authorities. They drove a truck into the prison wall (this otherwise only happens in films), killed one guard, and an unfortunate child that was in the wrong place at the wrong time, and got away with the inmates, just like that. For good measure they subsequently put most government buildings to the torch, and blocked the Route Nationale #1, the only link between the Gonaives in the north and Port-au-Prince, for a day or three. For completeness sake I should add that certain diplomats are convinced that this is all yet another theatre play, president Aristide having to be seen to act but allowing his prisoner cum political alley to return to Gonaives so that he can be liberated without the government being seen to allow criminals to go free – one plausible explanation, nothing surprises in Haiti. But even if this is true, the situation must have gone out of hand, because ever since Gonaives has been the centre of demonstrations against Aristide; these people have actually threatened to march to the capital to remove Aristide themselves. Of course this is not going to happen (famous last words!), but the mere fact that gangs under the control of politically motivated criminals (or are they criminally motivated politicians) can get away with something like this is scary: it is reminiscent of Afghan and Somali warlordism, and will only encourage further development of the same in other areas of Haiti, further breaking down whatever government control there has been. 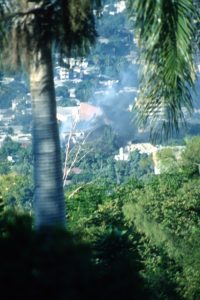 smoke seen from our balcony, from tyres burning in Petionville – or perhaps the houses of opposition politicians

And indeed, the unrest continues. President Aristide has still sufficient support to command local demonstrations in favour of the president, and we have seen increasing tyre burning (indeed, the method of choice to make a point, no matter which point) in all sorts of places, almost daily, and most concerning today in our own Petionville, the closest to upmarket suburbia that Haiti has to offer. Today’s motto was ‘Aristide for life’, but just as often public discontent will encourage people to demonstrate against the current power brokers. In fact, last week Route Nationale #2 was actually blocked in two places at the same time, not too far away from each other, one demonstrating against and another demonstrating for Aristide.

Then there is the University, which is on strike because the government has replaced the independent board with a group of government supporters. And there is the post office that went on a general strike to demand higher pay, not having received any increases for I don’t know how long. And then there is the normal crime, like the killing of a syndicate leader in the Port-au-Prince port last month, and the revenge of the syndicate, kidnapping a port official and burning him to death in broad day light, in front of the port authority building. Or the two gangs that have been fighting over territory at the edge of Cite Soleil, Port-au-Prince’s supreme slum, for weeks, to the extend that the shopkeepers went on strike and closed their doors for two days because it became impossible to do any business at all.

The overall impression is of a situation that gets increasingly confusing. Two years ago demonstrations were well controlled, and extremely well organised, probably by elements in the Lavalas party, the political party of the president, but these days it seems that everybody with a grudge spontaneously starts burning tyres, throwing stones or whatever, uncontrolled and therefore perhaps less powerful and threatening, but much more unpredictable. People keep on saying that there is no political alternative for Aristide, but that does not stop people from breaking up the current power structure. If there is indeed nothing to put in its place, that may well mean an even more chaotic future.