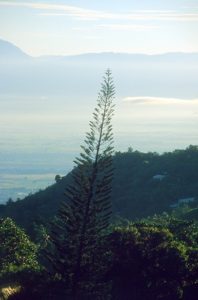 the view form our house

Moving into our house we experience a bit more of the Haitian reality and the Haitian approach to life, but the house is worth it.

I finished the previous entry with the observation that our hotel had, most of the time, water and electricity. How different has that been the last couple of weeks! After we moved out, to our own house, we started to get to grips with the realities of Haiti. Only yesterday we finally celebrated that we had, at the same time, electricity, a working water heater, a working inverter – a kind of a battery pack to survive the times without electricity -, a generator – in case you have drained the inverter, which is not at all unthinkable, with only four or five hours town power a day -, fuel for the generator, a working telephone and a television connection. This may sound trivial, but in Haiti it is not.

The moving itself was an experience. We live rather high up a hill above Port-au-Prince, and the steep access road is obviously too much for a large container lorry. So our container had been unpacked in the harbour, and the individual boxes loaded onto a smaller truck. It turned out that all boxes, really every single one of them, had been opened by customs. Haitian moving staff is not particularly helpful, so when my wife, who was present when the container was opened in the port, wanted to have the boxes sealed again before transport to our house, in the small, open truck, she was, reluctantly, given a roll of tape. “Go ahead, do it yourself, if you feel strong about this!” Later, only with the most horrendous threats I managed to convince the movers to deliver the boxes inside the house, rather than leaving them in the driveway. 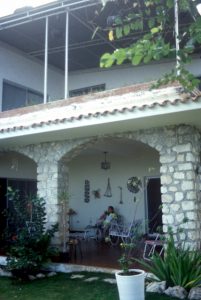 the terrace, and the balcony, overlooking the garden 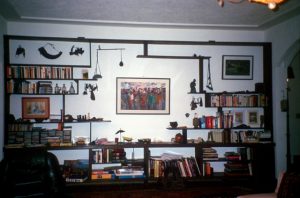 The house is located up in the hills above Petionville, the upmarket suburb of Port-au-Prince. And upmarket it is! In our search for houses we did see some incredible architectural achievements, some real nice places, but often either badly run down over the years, or too far away from the office, or way outside our budget. As I said, access is via a steep road, and pretty poor in place, potholes and the lot – but look at it from the bright side: this means that the house is relatively safe, as potential thieves will not want to travel up this road, but rather take an easier target – the Haitian way of looking at things. And just in case, we have one armed guard during the day, and two armed guards during the night. Target hardening it is called (although the other side of this argument is that, if the crooks do bring their own guns, a robbery may soon escalate into a shooting party). Haiti has a bad name, security wise, and this is obviously something to watch closely. 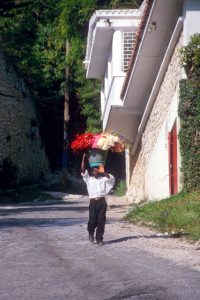 every day, flower traders would come down the mountain, on their way to Port-au-Prince

As for the house, this is really wonderful, and pretty large with five bedrooms. Two separate balconies upstairs, and a large and a small terrace downstairs, with views over the mountains, over Port-au-Prince and the sea, and over some of the enormous satellite dishes that our neighbours have here. There is a large garden, which needs trimming, and a whole range of interesting fauna and flora – two mango trees, a lemon tree, a grapefruit tree, an avocado tree, and scores of lizards, both inside and outside the house, very cute. And I do not know how many different birds, in all sizes and colours. Of course, a less attractive population also exists, in the form of particularly persistent mosquitoes, a few pretty large and hairy tarantula spiders, and termites in every corner of the house where there is wood – a particular concern with respect to our own furniture, especially since they are apparently very picky, only attacking real quality wood, as in our desks, for example. And did anybody mention cockroaches?

Petionville itself is very nice, a small suburb with its own centre, its own string of good restaurants, shops, a  few good supermarkets etc. Large colourful open markets everywhere, people in the streets, everybody very friendly, smiling, good-humoured. Art galleries with the typical Haitian paintings, with metal works and all sorts of other handicrafts that people produce here, plenty to keep us occupied. Even before we explore the wider Port-Au-Prince area, the big city and the beaches outside. 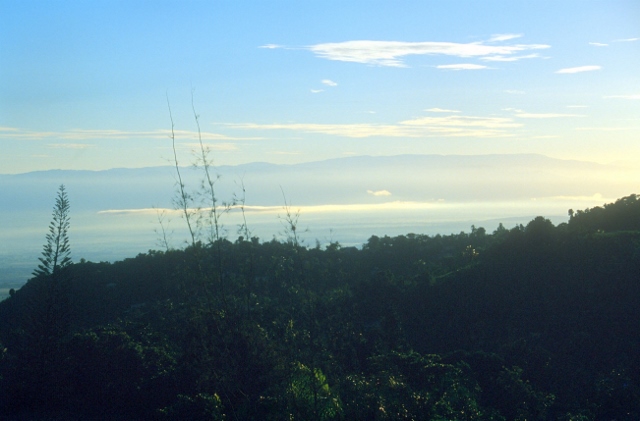 the view from the balcony, early morning