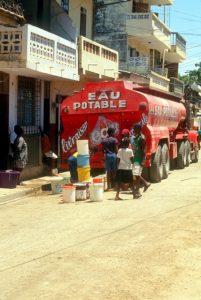 water truck delivering in Cap Haitien, where running water is rare – one of the objectives of the development work is to provide people with clean water (but not through trucking, we rather look for more sustainable solutions)

I came to Haiti because I had accepted a job as Country Director for an NGO, a Non-Governmental Organisation – what is otherwise known as a charity. The one that employed me was child-focussed organisation that was largely funded through individual sponsorship: somebody in the rich world paying to support a child in the poor world. This was quite different from what I had been doing before, working for a large oil company, although having said that, the intricacies of management are to a certain extend comparable.

Let me start with stating that running a child focussed development organisation is infinitely more complex than running an oil company. This stems in part from the misfit that exist between the perceived best interest of our two groups of customers. On the one hand there are the sponsors, who want to see most of their money go to Jimmy or Suzie, so that they can get a better life individually. On the other hand we have the children, who, as generally agreed amongst development experts, benefit much more in the long term from improvements in their communities, rather than on an individual basis.

Then there is another peculiar element of a sponsorship organisation, the communication between sponsor and sponsored child. Imagine the shear amount of work that goes into maintaining the communication between a child in a poor community somewhere in the NE of Haiti and his or her, say, German sponsor. In order to comprehend what his or her sponsored child has done over the last year, the child writes a letter. Letter goes from Creole, often via French, into English, and is then sent to our office in Germany, where it is translated into German before it is being delivered at the sponsor. The response goes through as many steps in reverse, and if it is not just one sponsor, but a school class who supports the child, it is not just one, but tens of letters that go this way. In Haiti we support 45,000 children, and growing – imagine each child having at least one communication per year.

The next challenge is in what is called program, the interventions orchestrated by my organisation to try to improve the lives of so many children and their families, their communities. An absolutely fascinating aspect of the job, and at the same time a daunting task. Simple things as getting these children to school, for example. We have children in some 1200 schools across four districts of the country, and we pay school fees for them (90% of the schools in Haiti are private schools!). Needless to say, there is an incentive at almost every level to try to charge those fees more than once. Then we build schools, houses, hospitals, the whole lot. Unfortunately, local contractors are less concerned about the development of their own country than about the development of their own pocket. And that mentality it not necessarily limited to the contractors. Then there is the potential mixing of interest at the grass roots level, community leaders identifying what is necessary for the community, but in the mean time running for political appointments as well, and taking credit for the improvements to capture votes. Very difficult, indeed. More delicate issues are, for instance, the widespread conviction that children need to be beaten in school, a conviction present at all levels, apart from that of the children. Go and change the mentality of teachers, school directors, parents: not an easy task!

To make things even more complicating, we have a number of specialists working for us who all are convinced that they have the ultimate answer to the problems in every single development situation, which, if put next to each other, covers the entire spectrum of possibilities and impossibilities. Now, add to that that everybody is generally very sensitive, and easily bruised, an aspect from the development sector I may have underestimated, and imagine the discussions. In that respect an oil company is a lot easier, as you can just oint to the bottom line.

Of course, because the development sector obviously pays a lot less than the private sector, you do not always attract the highest level professionalism. This becomes especially clear in areas of efficiency, or, rather, the absence thereof. Duplication of work, lack of simple communication (and the associated pissing off of people once they realise they have not been informed), this all results in a chaotic atmosphere in which it is not surprising that the bulk of staff complain that they have to work so hard to get things done.  Right, there are extenuating circumstances, like the telephone system (poor, to say the least, even mobiles do not work very far beyond Port-au-Prince), and the unreliability of third parties, suppliers and the lot, who often do not turn up, or change prices at the last moment claiming volatility of the exchange rate, but by and large there is lots of room for improvement.

To complete the challenge, my organisation suffers from a paranoia with spending money. The many superfluous checks and balances, the over-design of internal controls, etc., make this an organisation even more bureaucratic that my former oil company, with more rules, more forms, and more signatures than I have ever seen before. I think currently the Country Director sees a purchasing process five times, from approving the need for an acquisition, via approving the tender process, approving the outcome of the tender and approving the purchase order, to signing the final cheque. That, obviously, is going to change.

Despite all this, I have no regrets having made this career change (If I had, I wouldn’t admit it, of course, but that aside). I have the feeling that I will be able to make a difference here (not surprising, of course, given the lack of efficiency – in the land of the blind), quite apart from the fact that it is actually rewarding to see these children go to school, or see these people build their new, real house next to their mud hut. Dare I say, more rewarding than reading in the oil company’s annual report that the dividends are up.